Doctor Who: The Wedding Of River Song 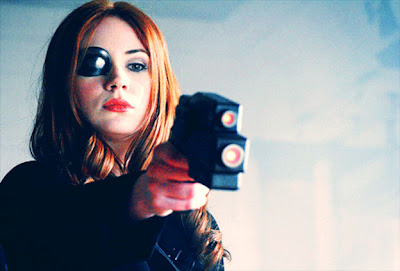 Sing A Song Of Silence
Doctor Who: The Wedding Of River Song
Airdate: October 1st 2011. UK. BBC1
Warning: I guess there must be spoilers in here somewhere... except nothing appeared to happen so I’m not sure there’s anything to spoil.
Well, after the mess of last years series of Doctor Who I wasn’t at first expecting much from this years incarnation of the series but I was quite pleasantly surprised by this years offerings because probably half of them were okay and both the season opener and the mid-season opener were pretty great episodes. Perhaps it was too much to ask for a finale closer to the same level of energy and intrigue but, to be honest. this little shambles was possibly a lot weaker than even last years end of year finale. Weaker even than Russel T. Davies last two episodes with Tennant (it had been going great guns until The End Of Time and then the rot kinda set in).
There were some great things about this weeks episode, for sure. The revelation of Amy finding Rory yet again in their time-discombobulated state and the line about Amy being The Doctor’s mother-in-law gave us some nice comic moments. Also, a nice little acknowledgement to the recent death of actor Nicholas Courtney came in the form of a phone call made “by” The Doctor informing him of the death of Brigadier Sir Alistair Gordon Lethbridge-Stewart. That was a really sweet and right thing to do for him. Ultimately though, anyone looking for any real answers for this season have had them left either wiped out by some cheap deux ex machina of unwritten timey wimey, mitigating, patronising nonsense or... even worse... apparently forgotten about and left completely unanswered, ready to be plundered for more self-referential nonsense in future seasons.
We still don’t know who Madame Kovarian is, the return of Canton Everett Delaware III did not happen, we still don’t know who the little girl (presumably young River) who regenerated at the end of Day Of The Moon is and we also, as it happens, never saw the footage briefly shown at the end of last weeks trailer of River Song floating in her spacesuit in a water tank. Lots of stuff cut out of this episode methinks?
It wasn’t’’t completely unentertaining... it moved like the blazes, which it would have to do in 45 minutes to answer all those questions and tie up all those loose ends... except, it didn’t answer those questions and it didn’t tie up those loose ends. In fact it made as little sense as last years finale which may or may not have completely and bizarrely unwritten all of The Doctor’s back story from the 40 plus years before then (still want to know why Amy and co don't remember the Daleks and why the inhabitants of earth don't remember Victorian cybermen). In short... it didn’t really quite make sense and it feels like the writers etc cheated and just didn’t want people to notice this stuff.
I so hope not. I hope that Mr. Moffett, who is actually a pretty decent writer with a mind full of good ideas, remembers that neither of these two seasons he’s overseen make a lot of sense in continuity and that his so called game changer didn’t change anything at all yet that he hadn’t already destroyed last year. Now I think the man is clever and he’s got something up his sleeve because he’s still dropping all the hints and questions in himself... but the rate we are going this feels like a really long, drawn out process and, sadly, this latest series has seemed just a little more like Back To The Future Part 2 than I would have preferred. That is to say... it’s just filler to get us to a point where we are all ready to play with the next part of the story and... hopefully have some fun with it. I’m sure it will get sorted someday but I’m beginning to get that sinking feeling and am sensing myself losing interest in the show just a little. Let’s please all remember the lessons people hopefully learnt from the dire last series of Torchwood: Miracle Day and not let this show deteriorate as much as that one did please!
To top it all off though, after resolving absolutely nothing, we are left with and invited to ponder a line from the very first episode of the programme from 1963 when, if my memory is kicking in correctly, William Hartnell said “Eh? Doctor who?” Apparently this glib line which was presumably written into the first script to justify a great title is the question that’s been on “everyone’s lips” in the universe... Doctor who? Oh really. How could it be you meta-textual addicts? He’s not called Doctor Who... only The Doctor. The only people who have any inkling of the concept of Doctor Who are us, the viewers. And I’m afraid that we’re really not a part of the Whoniverse the last time I looked... no matter how much some fans of the series want to believe they are.
So yeah... well this episode leaves me fairly sure of three things then...
One: It was a bit of a waste of time.
Two: We’ll be coming back to these questions later on, presumably after the Christmas special.
Three: “Doctor who?” is a question that will never be sufficiently answered in my lifetime... and certainly not anytime soon without some side-stepping of the question which involves rephrasing that question and changing it into something else.
There seems to be a lot of cheating going on in Doctor Who just lately and, frankly, I am beginning to be made to feel just like that by the show... cheated.
Posted by NUTS4R2 at 20:58

Labels: Doctor Who, The Wedding Of River Song