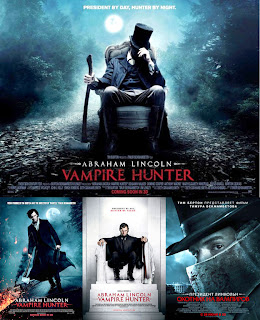 I Got You, Abe

Warning: Yeah, there will probably be a few spoilers in this one.

My first warning for this review probably should be that I can’t give you a solid call on whether this adaptation is anything like the novel it’s based on. Knowing Timur Bekmambetov’s work like I do though... I’m guessing probably not? However, that’s not to say that this is a bad film... on the contrary, I come to praise Abraham Lincoln: Vampire Hunter, not to bury it. But I probably do need to clarify my perceptions of the director before I start heaping praise on this movie.

Timur Bekmambetov made two movies inspired (to put it kindly) by a sequence of quite extraordinarily good books. These two movies were called Nightwatch and Daywatch and... yeah, they were okay. Not fantastic and the second movie was better than the first but, still, they held my attention for the running time of the movies, especially, like I said, the second one.

But then I had the good fortune, after waiting a while for an English translation of these Russian fantasy masterpieces to hit our shelves here in the UK, to be able to read the original novels, a couple of which were culled, again I’ll be polite and call it inspiration, to use for the movie versions. The four novels are called The Night Watch, The Day Watch, The Twilight Watch and The Final Watch... and they are truly wonderful tomes.* If you’re a fan of fantasy fiction you should just read these immediately, if you haven’t already done so. They are awesome.

But the downside, of course, is that I saw not only how little of these works made it into the movie versions of these stories, where the characters which were taken from the novels had been dumbed down to the point where any complexities of the drama of the stories would be practically unfilmable unless you took some time to actually let these characters breathe... but also the amount of extraneous material which had been thought up and grafted onto a fairly unfaithful plot line... thus changing not just the mood of the stories but also the actual meaning and consequences for the characters in these stories.

In other words... I know Timur Bekmambetov is a Russian movie-maker but it turns out he just trampled over these stories and did his own thing with them just like a regular Hollywood production might just buy the title of a book and then make a movie which ended up being nothing to do with that book. That’s what the Nightwatch and Daywatch movies turned out like. Eye candy with none of the actual meaning or entertainment value of the books coming through from them at all. The movies are so different, in fact, that one of the characters in the fourth book actually has a dream of a bizarre alternate universe which is depicted as a description of one of the scenes in the first movie. Because the movies have got very little to do with the novels.

Ok... so even though the guy who wrote the novel Abraham Lincoln:Vampire Hunter was on-board to pitch in on the screenplay to this movie, I’m still not saying this movie is like the novel. I probably would have guessed it was though, which is where I would have gone wrong because I read a few paragraphs of a review today saying that this movie is not a lot like its source material. However, the reviewer in question also gave this movie quite a negative review... and that’s not what I’m going to do here.

Because, frankly, this film is a lot of fun... but the trick it does quite neatly, in my humble opinion, is not to be a film about having fun... it’s a movie that has an actual story and a bunch of characters you care for... and it still gets away with being quite fun. Now I’m not knocking movies that are all about having fun. On the contrary, there are loads of movies that do that really well... Barbarella, Danger: Diabolik, Our Man Flint, Charlie’s Angels etc... and I love them all. What I’m saying here is that this ludicrous mix of early American politics with ramped up vampirism thrown in is already ludicrous enough in both its plotting and in some of the quite wacky, “did they really just get away with that” scenes that if the key actors in this one were seen to be taking this one anything less than seriously, there’s a chance that could have pushed things too far in the direction of the “total throwaway” and would have been forgotten almost as the images flickered over your retina. The actors in this one, however, are all giving great performances and the narrative voice-over supplied by Lincoln gives the movie a big shift in tone and helps you... kinda... take things seriously.

I say kinda because, well, there’s some real over the top fun in this movie and it’s no different to a lot of vampire movies, both contemporary and vintage, which pick and choose their own rules when it comes to the common traits of your common or garden vampire. The chosen “vampire model” here is the super strong kind who seems impervious to almost anything except actual decapitation or any weapon laced with silver. You wont see any crucifix phobia, running water or stakes wedged handily through the ribs on this one and, although the vampire characters do tend to wear sunglasses in the bright sunlight for most of the time, you won’t see any blistering skin or melting Minnies whenever the sun comes out. Of course, this does kinda water down their presence a little as traditional, gothic vampires but, ten minutes into this film and you’ll soon figure out that this certainly isn’t a gothic horror piece... it’s an action piece where the vampires are the new brand of “beat-em-up” super villain and it’s up to our good friend Abe to put a stop to their evil stranglehold on the human race and the political spectrum.

So what I’m saying is, though I mourn the use of vampires as something less than their past movie and literary incarnations, I am also kinda happy because that means you can have a movie where this scene happens...

“A bad guy fighting Lincoln in a stampede of horses picks up a horse by its leg, spins it around and around and then throws it at Lincoln. The horse hits Lincoln and both man and beast go rolling backwards... but after a few rolls Lincoln comes up in the saddle of the beast he was hit with and rides on towards his vampire foe with his silver coated axe.”

Yes, folks, it really is ludicrous but the general poe faced sterness employed throughout these... ahem... serious events, somehow make it all a little easier to digest and, despite scenes like the one I just described, there are also some quite emotionally valid sequences in the film involving the personal fortunes of the Lincoln family which actually will have you caring for our main protagonists and rooting for them in their final battle against their vampire enemies. Especially when one of the good guys is sporting those brilliant folding-lens sun glasses that Vincent Price wears in Roger Corman’s version of Tomb Of Ligea. Great stuff!

When all is said and done, this is quite a spectacular movie full of wire work fighting and “bloody deeds” kinds of shenanigans. There’s not a heck of a lot to think about and it doesn’t feel like it’s pulling too many gory punches either. Also, unlike the majority of “three dimensional extravaganzas” I see these days at the cinema, this one feels like it was born to be seen in 3D... so even that worked for me. I know this hasn’t got the best rep from some of the comments I’ve seen but I don’t really care what other people thought of it... this one gets a strong recommendation from me and I’ll be first in line when the DVD hits my local Tesco in a few months time. Bloody good popcorn fodder film-making!