Attack of the Crab Monsters 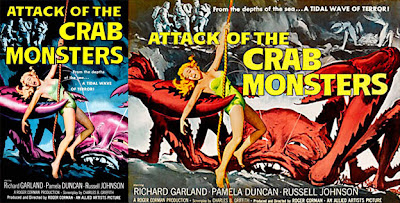 Oh my gosh! This is just an amazing discovery.

I can’t believe nobody’s ever told me to watch this movie throughout the course of my life. It’s so hilariously bad and stupid it just might be one of the most entertaining B-movies ever made! I’m amazed Roger Corman directed this movie (rather than just produce it). It’s not even his directorial debut, he’d made a number of movies before this one. I’m just having a hard time comprehending that the man in charge of such an amusingly incompetent production was only a few years away from giving us his Poe “inspired”, widescreen classics which show infinitely more taste and restraint in one scene than the whole of this movie put together. Not as much fun as this though.

Okay... so this starts off really well with a crab themed, animated title sequence which is quite striking in its design and in some ways bears a lot in common with those elaborate end credits animations which have become all the rage over the last 7 or 8 years with modern cinema audiences. So what you’ve got here is a quite stylish title sequence followed by... THE REST OF THE MOVIE!

The rest of the movie is absolutely an insult to anyone’s intelligence but it does it’s insulting with such fearlessness that you can’t help be won over by it’s dumb charm. I can’t possibly describe all the magical uselessness of this movie... you really have to experience this film yourself. But I can at least give you some of the highlights so you know what you’re in for.

A group of people, including many scientists, go to an Island to find out what has happened to the scientists who had previously been sent there to study the effects of “Nuclear Testing” in the general area. As they get to the island and row to shore, the second or third boat almost runs aground coming in to the beach. One of the sailors falls off the boat and... even though they could probably stand up and walk to the shore in this depth... the sailor falls down seemingly to the bottom of the ocean depths where a big eye in close up spots him and... does something. The sailor screams under water... as you would, I guess. The crew manage to snag the sailors body and haul him up but the limp rag mannequin they pull back on the boat is minus it’s head. Oh my gosh! Where has the sailor’s head gone... well nobody seems that much worried about it to be honest but one of the sailors does yell to his men on the boat to “Cover him!” One wonders if this order was perhaps a necessity of trying to hide the fact that said sailor was a cheaply constructed mannequin for the cameras as opposed to being a mark of respect but... well, maybe I’m just being over cynical. No worries, even worse tackiness and general incompetence is to come.

As the plane which brought the crew to the island (which is never seen in context with anything else in the story because it’s obviously just stock footage... something which this film does a lot, actually, in terms of not matching shots up or placing them in context) flies off to return in a month, it unexpectedly explodes and so the party of people are left stranded on the island with just their supplies unless they can get rescued. There seems to be no logical explanation as to why the plane would just explode like that but... hey, not to worry, nobody thinks to ask why it exploded anyway.

The acting is universally bad but half excusable since the script is absolutely abysmal and takes all the shortcuts it can in terms of expository dialogue... even including a long sentence or two which lists more or less every character who has come to the island (soon to be food for crabs) and their profession in the shortest time they can. Even a seasoned veteran might have trouble selling these kinds of lines and attempting to make them sound half convincing... the actors here seem to be less skilled at handling this kind of thing.

Pretty soon there are some violent explosions and some tremors which reduce parts of the island and open up a strange network of caves... and some of the dynamite has gone missing too, but too much later on in the story to make much sense as a reason for this series of tremors. A marine biologist and her husband take a dive in the ocean to find out... something. I still can’t quite figure out what but I felt safer when she went in the water wearing a cleavage revealing rubber suit because the way she was wearing those sweaters she was going to have someone’s eye out. As she and her husband swim around and then resurface, unscathed from the depths of the ocean (which seems to be situated perilously close to the beach again so how they could get near the depths of the ocean from where they surfaced is beyond me... all they needed to do was stand up) two things became evident. Number one is that the guy playing her husband may be quite wooden in his delivery but, he has an even hairier chest than Sean Connery! Seriously, I thought she’d been swimming with a shaggy rug until the rug opened it’s mouth and began delivering lines. Secondly, all the swimming about in the ocean was shot using a tank. It wasn’t shot “in” a tank in terms of where the camera was placed but at least the actors were in the tank. I know this because, aside from the top of the tank not matching the surface of the ocean in any way, shape or form, I noticed that at one point the girl was swimming past what looked suspiciously like some french windows. That would be the reflection of the french windows behind the camera in the glass on the front of the tank then.

People go missing (one falls down a big pit which has opened) and the blasting and tremors go on at semi-regular intervals, as demonstrated by some mild camera shake and some very bad “camera shake acting” where the humans are all over the place but the leaves on the trees don’t move. A crab comes to smash the house of the puny humans but the giant crab claw which  two of the party barely escape from does not tip them off that there was a giant crab for some reason. The “still a mystery” intruder nicks their food and destroys their radio... which is a bit strange because you find out the crabs are blasting away at the island to make it smaller so the humans have nowhere to run to. Why don’t they go back to where the humans are and just “crab them up good” there and then? Apparently because the crabs are scared of electricity, thats why! Um...

And what are those eerie voices from some of the missing people which keep appearing to characters, trying to get them to follow them? Why does one scientist shout down to his colleague from a cliff edge in close up but then, when the shot continues in long shot he is wearing sunglasses again, before cutting back to close up where the glasses are mysteriously absent? And why is it that, when a person runs through the cave system, he passes exactly the same bit of rock wall three or four times before reaching his destination?

Soon, some answers are forthcoming. The crabs are scared of electricity and crumble into dust when you pass a current through them, but are impervious to bullets and bombs... although cutting bits off them seems to have a successful outcome. The voices are the voices of dead colleagues who have had their brains eaten by the crabs and whose thoughts the crabs can transmit through any metal device in close proximity (rifles, belt buckles etc). This should have been twigged earlier, I feel, since the people behind the voices were never willing to appear and were always trying to get one or other member of the team to “meet them by that big pit with the caverns” instead of arranging a more sensible, less perilous rendezvous point. Soon, the scientists are wise to the crabs plan to whittle the island down to nothing (“There was a mountain over there yesterday. Remember?”) and it’s not long until we get into all out human versus crab warfare. The humans cut off the claw of a crab which has been temporarily stunned and take it back to study it. This gives rise to an absolutely hilarious scene later where a giant, puppety crab (these things never look even remotely realistic) is pretty much shaking his claw at the humans and screaming at them words along the lines of... “You cut off my claw puny humans. Ha! Ha! Well I can grow my claw back in just one day. Will you be able to grow yours back when I take your legs off. Bwahahahahahahahahah!” This film has talking, puppet crab monsters with “evilistic”* intentions... this film is a work of genius.

I’m not sure how much more I should go on about this. Maybe only to say that the end of the movie bears no small resemblance to the end of Quatermass And The Pit in its “final solution” to the crab problems and that, with only two survivors left on a small island, the happyish ending (with just unbelievably atrocious acting) is one of those endings where the producers obviously hope the audience don’t think about that conclusion too closely. Why? because you’ve got two characters stuck on a tiny piece of island with no food and no hope of rescue... that’s why! This is almost as far from a happy ending as you could get. Is slow starvation with, admittedly, a sunny beach to have uninterrupted sex on, any better of an alternative to being sliced up for crab meat and your brain absorbed into the minds of th crabs? I think not.

Attack Of The Crab Monsters is, it would be fair to say, something of a lousy movie... but it’s just the right kind of movie you can have a lot of fun with if you approach it in the right way. I’ve watched this twice now in the space of two days and I really don’t have time to be repeat watching movies. I can only recommend this shining bastion of crabby goodness to anyone who wants to scuttle along for a viewing. With just over an hour in it’s running length, it won’t pinch too much of your time.