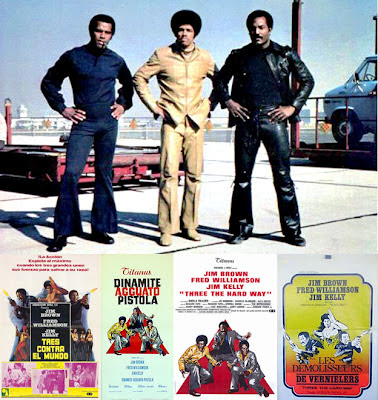 Right, this is a film I’ve been meaning to see for a long time now because it’s got three classic heroes of 70s blaxploitation cinema all in one film... Jim Brown, Fred Williamson and the incomparable Jim Kelly. They are the Three... who are having to do things... The Hard Way... apparently.

Okay, so this one’s directed by Gordon Parks Jr, who also directed Superfly which, apart from the awesome score on it, I didn’t really dig all that much when I saw it. This movie is much more palatable to my visual taste buds but the score on this one by Richard Tufo, while still okay, is not a patch on Curtis Mayfield’s epic for the former movie. But it is still quite funky (when nobody actually sings over it) and it doesn’t really matter all that much because this one’s got...

Um... sorry, don’t know what came over me there.

Alright... the plot on this one is unbelievably non-politically correct. I’m almost afraid to even mention it in this review because it’s just so racist and if anyone tried to make a film with this plot device in today's climate, they would be handed their backsides by the media and public alike. However, I’m reviewing the movie here so I’ll just go ahead and say it...

A sleazy group of neo-nazi white boys have been kidnapping and experimenting on black people in order to perfect a new toxic chemical which will only kill black people. Their plan is to dump it in the city water supplies in three test areas and start “cleansing the nation”... of black people.

Seriously, I’m not making it up. That’s the premise!

The opening, pre-credits sequence shows a friend of Jim Brown escaping from the villains’ compound and, after the credits have rolled to an interminably questionable choice of opening title song, the wounded guy hooks up with Mr. Brown and enlists his help. Pretty soon after though, the group of “good ol’ white boys” finish their ex-prisoner off with some bullets and kidnap Jim’s girlfriend from the hospital in the process. Not good.

Soon Jim Brown has enlisted his friends Fred Williamson and Jim Kelly to help him tackle the problem head on. This seems to involve the following process.

Jim goes to see Fred Williamson who has been showing his romantic prowess in a previous scene. Jim and Fred get chased by evil guys and shot at and everybody has a big fight in which the group of white guys all get soundly trounced. Then they go off to see if they can get ahold of Jim Kelly, who has been beating up the police who are trying to frame him, with his ultra-fine, slow-motion kung-fu techniques and impressive array of what can only be described as “kung fu whoops” coming from his mouth. The three of them all get attacked by the villains and kill them all apart from one guy they capture. After a few more shenanigans of this nature, the three separately go to the three cities targeted by the “bad guys” and each stop the toxin from getting dumped in their water supplies. They then regroup and “hit” the compound together to kill all the bad guys and rescue Jim Brown’s gal.

Now you might think from this description that this movie is immensely entertaining... and you’d be kinda right actually. It’s nowhere near as slick or as enjoyable as, say, the Shaft trilogy or the first Cleopatra Jones movie, but it has got a certain vibe to it and it’s also got a raw gutsiness that you wouldn’t necessarily expect in some of the more commercially “clean” product of this genre of movie. For instance, there’s a brilliant sequence where Fred Williamson calls in three dominatrix friends to find out what their captured bad guy knows. After a while they come out all topless and sweating and send Fred and Jim in to pick up the pieces. The guy is so terrified of what’s been happening to him, even though there seem to be no marks on his body even, that he tells all... then dies of fear before the ladies can continue their perspirational work. These are some mean mothers and not anything like the more common images of dommes associated with the BDSM scene these days (and perhaps is worth something from the point of view of a historical document to those interested in such things). Even though there’s a lot of humour in this sequence, it also has a very dark undertone and it lends this movie a certain credibility or edge which some other films in this sub-genre lack.

It’s also competently shot and, while some of the action sequences may seem a little less heart pumping to modern audiences, there’s certainly enough enthusiasm for the running/jumping/fighting by all concerned. And, to be honest, I always find it fun how some of these 70s action movies pan out. There seems to be some vehicles in this one, for example, that just wanted to explode for no other apparent reason than they hit a small bump in the road or went up a curb. I reckon 70s cars must have been built to spontaneously combust if Hollywood movies of the time are anything to go by. I’d be really cautious about driving one myself... it seems like all you have to do with these things is lean on the bonnet and you’d suddenly see your car and body engulfed in flame. Not a prospect I’d relish.

Three The Hard Way isn’t exactly a top notch action movie... but it does have a lot of heart beating within it to inject a little soul into the proceedings and, like I said before... a lot of enthusiasm. The plot is absolutely outrageous and the music varies wildly from cool n’ funky to downright corny as hell (usually when somebody starts singing) but ultimately, if you’re a fan of this genre, then this is one you should probably add to your “to watch” list if you haven’t seen it already.