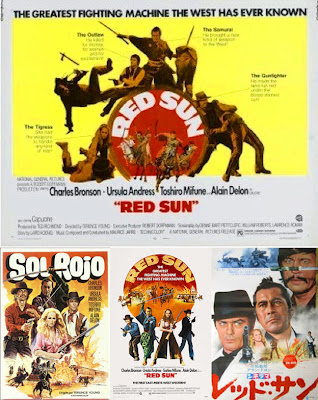 I’ve been trying to obtain a watchable home video edition of Red Sun for many years now. Usually the prints available of this one are presented in a 1.33:1 aspect ratio but we’ve finally now got a release which restores the original theatrical 1.85:1 ratio (even though I suspect, having now seen it in this aspect ratio, that it was originally shot in 1.33:1 and cropped down for cinemas).

This is good because, Red Sun is a bit of a curio as a Western, in that it stars my favourite actor Toshiro Mifune, rubbing shoulders with an all star cast which includes Charles Bronson, Alain Delon, Ursula Andress and Capucine.

I’ll say that lot again while elaborating further so it can sink in why this movie screams out to be watched by anyone who loves cinema...

It stars Toshiro Mifune as a yojimbo who finds himself in the Wild West, aided (unwillingly at first) by the roguish outlaw Charles Bronson as they seek the current possessor of a precious sword and the loot which Bronson’s gang had stolen from the train carrying Mifune and his diplomat/retainer. The villain who has run off with all this is Bronson’s double crossing, evil and deadly former gang member as played by Alain Delon. On the way they stop by in Capucine’s whorehouse to pick up Delon’s girlfriend Christina, as played by Ursula Andress, to use as a bargaining chip. And the whole thing is directed by James Bond director Terence young, who also taps one of his regular character actors Anthony Dawson in a small role (well it would have to be a small role sharing screen time with this cast, wouldn’t it?).

Despite the pitfalls of the enormity of these stars coming together in this movie, and the politics of three countries co-financing the venture, Red Sun actually turns out to be, not just an interesting movie, but an entertaining one. It’s a little inconsistent in places but ultimately it’s held together by the strength of the actors (who really are, in this case, very much “movie stars”) and you really can’t fault the performances here (this is possibly the best I’ve seen Ursula Andress do in a movie, if not the most I’ve seen of her in a film... although she does briefly go topless for one scene).

The film seems, maybe, just a little too comfortable to watch in places although I don’t know why that is because in terms of content, Terence young doesn’t steer clear of nudity and he certainly doesn’t skimp on the blood, usually evident when Mifune runs someone through with his sword. But I did have some issues with some of the footage and the way it’s been cut together in general. There are a lot of Western landscapes with the small figures of our main protagonists (usually it’s Mifune and Bronson together in these kinds of shots) in contrast to the environment which threatens to engulf them and this visual style seems to work really well in some places, nicely framed with a sense of scale implied within the confines of the shot... and then there are other shots of a similar content which just look sloppy and badly framed like they’re missing a major element which could have made them work. Unfortunately, the two kinds of shots are cut next to each other as often or not which gives the viewer a sense of unease... it’s like some of the shots were taken by the main crew and other shots were taken by the second unit, who were perhaps a little less on the ball when it came to selecting a similar style of shot design. It does tend to lend some sequences in the film a certain lack of consistency which I found wore on my nerves after a while.

This movie is a bit of a Western road movie so there are a lot of shots which are one or two (occasionally more) riders on the trail of their ultimate treasure but it’s the characterisations when the camera moves in a tad tighter that make this movie so darned entertaining. Toshiro Mifune’s “honourable warrior” who has seven knots tied in his sash and who has to undo one knot each day, moving him further forward to the point where, if he fails to recover the sword after seven days have passed, he must commit seppuku and join his ancestors... is a typical Mifune characterisation. That is to say it’s damn good and you can just feel the loss of history in the character when he reveals that, due to the political climate in his own country as forced by people like the Americans, he is probably of the last generation of samurai before they are no longer needed and die out as a breed.

Charles Bronson’s relationship to Mifune in the film is not dissimilar to the relationship dynamic which plays out between Mifune and Lee Marvin in John Boorman’s Hell In The Pacific. Bronson always trying to lose Mifune or get the drop on him and Mifune repaying in kind... and sure enough the two soon become thicker with each other and form a genuine friendship, a friendship which ultimately leads Bronson to throw away his dreams of finding the gold and instead, at the last knockings, embracing the strength of character to sacrifice his goals and instead, do the honourable thing.

Alain Delon is just bad and you can’t trust him from the start. You know he’s bad because he’s incredibly well dressed and wears a black jacket and jeans. You also know he’s evil because he enjoys killing people more than... well... more than not killing people and also, he tries to kill Bronson, who is supposed to be his partner in crime... his boss even. Delon plays the most ruthless of the characters in this movie and you absolutely buy him as a villain. A thinly drawn, clichéd villain to be sure... but one who will worry you as to what he will ultimately do to the characters you have come to care about.

Then there’s Andress. She’s got “a thing” going with Delon and her character matches him in some aspects. You learn fairly quickly not to trust her (bewitching a man with her topless breasts before reaching for his gun... hey, she’d have shot me no problem) and luckily Bronson’s character knows not to trust her too. This doesn’t stop her having some depth to her character when she speaks up on behalf of our heroes after they have rescued her from a Comanche death torture. Andress doesn’t have a lot to do in this one but she really brings the character to life when she gets the chance. True, like the majority of the performances in this one (perhaps excluding Mifune’s who’s vast experience invests his character with a certain gravitas), it’s a very comic-book, stylised and blatant characterisation... but it’s just right for this film and it fits right in.

The music to this film comes from someone who is, to me, a surprising source to get to score something which is trying very hard to be an American Western. Directed by Young who was actually born in China, as was Mifune (although he was always synonymous with Japanese film), with a prominent French actor and a famous Swiss actress (who had worked with both Young and Dawson before on the set of Dr. No)... its a film where you wonder if Charles Bronson was just cast in it to be the “token American”. But it’s a Western with a difference and so to find the score written in a mode which doesn’t really harken back to Western Americana in it’s construction, nor more obviously to the then more fashionable style that Morricone brought to the Italian Western, I guess I shouldn’t be too surprised that famous Lawrence Of Arabia composer Maurice Jarre was chosen for scoring duties. He seems to have approached this very appropriately in some ways, highlighting a theme which is very much something with an “oriental” flavour to underline (and, of course, underscore) the unusual element of Mifune as a samurai in the West. It’s less of a Western score and more of a score which illustrates the warmth which grows between the characters... as opposed to relying on the tools-in-trade of the Great American Western. It’s not an absolutely wonderful score, but it is pretty interesting and won’t bump you out of the picture too much.

I could go on and try to persuade you as to why Red Sun is a gentle Western with a difference but I don’t think I really need to do that. Nor do I have to give it a full on recommendation because the main reason for seeing it is right in front of your face.

How many more reasons do you need to see this movie?