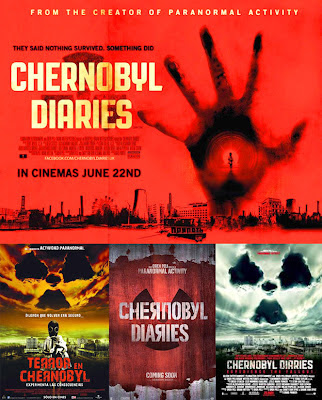 Warning: Mutated spoilers lurking in the
shadows of this review, coming to get you!

Well, after seeing Oren (Paranormal Activity) Peli’s Chernobyl Diaries last night, directed by Bradley Parker, it would be fair to say I am somewhat conflicted by this movie. Conflicted because, frankly, I don’t think it’s a very good film but, perhaps somewhat in contradiction to that, I did find it scary (or at least suspenseful) in that “watching-where-the-heart-pounding-jumps-are-coming-from” way you develop from watching too many horror movies over the years. Unfortunately, despite the elevated heart-rate while viewing, the answer to the whole when are the jumps coming and where from issue is pretty much... exactly where you are expecting them to be.

I was kinda stoked to see this movie because the trailer looks like another one of those found footage movies which maybe deals with “ghosts” from Chernobyl’s past appearing spirit-like to the main heroes... unfortunately, this is not a ghost story at all... and the two best moments of the movie are both already in the trailer.

The film starts off with a group of teenagers, or so I thought, in a montage of what the movie studio thinks are typically “teenage antics while on holiday” shenanigans backtracked with a terrible teeny-bop song and... really... this does nothing to endear you to the characters. Honestly, if this was supposed to make me identify with the group of main protagonists, a bunch of Americans on holiday, then the dumb, witless antics in this opening sequence was really not the way to do it. Seriously people, within five minutes of the start of the opening sequence I just wanted all these kids to die horribly.

I honestly thought from that point on that this movie was going to turn into a demonstration of a list of Stupid Things Teenagers Shouldn’t Do If They Want To Stay Alive In A Survival Horror Movie. And it did too!

You wouldn’t believe the stupidity of the “split up into smaller, helpless divisions” mentality of the main protagonists in this movie. But then it hits you... horror of horrors... the main protagonists are too old to be teenagers or kids! These are supposed to be twenty and thirty-something (judging by the age and looks of the actors) adults thrown into this situation together. Seriously, we are being asked to believe that a group of adults would be this shallow and stupid when faced with these kind of events? I shudder to think that there’s a section of the audience that can identify with the main characters here. It’s depressing. You just want them all to die... and they do.

This movie, plot wise, deals with a bunch of American “kids” (of adult ages) who go on an illegal “extreme tour guide” in the abandoned city which was emergency evacuated after the Chernobyl disaster. The older, strong, ex-military tour guide goes with them and that’s the entire set up. Once there, the escape route is cut off (car parts stolen) and they are left with “what lives” in the dark and abandoned city. It’s a great premise actually, and I would have loved to have seen a better rendition of it than the one I saw last night. Alas, it seems to suffer from every horror movie cliché in the book which, as I’ve said before, is not normally a problem because clichés usually work and can be as effective as anything... and to be fair to this movie, they do. The tension is ratcheted up at every level and it becomes almost a textbook exercise in how to create apprehension and worry in your audience.

Except... even for a horror movie, which are notorious in reputation for being stupidly easy to decode, this one is so blatantly hitting those marks that it becomes tired almost as it starts... and of course, it really doesn’t help if you can’t sympathise with the key protagonists.

For example, you know right from the outset that the “kids” strongest hope for any protection in the movie, the ex-military, self-confident tour guide, is going to be the first one to go so the key team of players are going to be left totally defenceless without any credible means to defend themselves. It’s, as I said, text book horror and excusable... but I’m really getting tired of it now. This tactic will probably work with an audience consisting of teenage “horror virgins” but the kinds of audiences who go to these kind of movies again and again are surely going to be left wanting a more sophisticated execution of the “bugger we’re f***ked” school of suspense? The old ploy of using low rumbles of almost imperceptible base tones on the soundtrack (when the boundaries of music and sound design overlap) to highlight, probably subconsciously to the majority of the audience, when they should be disturbed by some random element that they might not have picked up on with just the visuals alone, is also employed to great effect... but isn’t the fact that I picked up on that myself evidence that the execution of this is just a little heavy handed in this movie?

And then there’s the divide and conquer strategy on show here which I mentioned earlier. The “sinister malevolence” personified by what roams the shadows of Chernobyl already have a recognised modus operandi which manifests itself as them sticking to dark places (yeah, they only come out at night). Why then, do the “kids” in the movie insist on looking for their “taken” or “fallen” comrades during the day in the darkest recesses of the city they can find? Yeah, alright. Don’t shout at me, I know. It’s because that’s where the creatures have obviously taken them to... but come on, this is not how one survives a movie of this nature and leads to an “evade the scarey protagonist scene” directly reminiscent of ones found in such movies as Spielberg’s Jurassic Park and War Of The Worlds, and probably coincidentally, the Russian set The Darkest Hour (another film which I didn’t appreciate on the level at which it was intended).

So I’m really in two schools of thought about this movie because, frankly, it’s a predictable mess which, unlike many horror movies I’ve seen, I won’t be able to sit through again on DVD or any other home video format of the future (and I understand that this movie didn’t have any advanced press screenings, which makes me realise that the studio were less than confident about the kind of critical reception it would receive). On the other hand, the first run through is still a very effective, jump you out of your pants and create worry kind of movie... so if you’re a regular teen audience wanting a heart-leaps-into-mouth time of it, then you’re probably not going to be as disappointed with the general construction of this one as I was... and you might like to give it a go.

I can’t, however, justify giving this movie a recommendation to anyone who has more than a passing interest in scary movies, except perhaps as a tick on your check list of “movies that hit these points” kind of mentality. And even then you might be concerned with the most puzzling question this movie raises , since it is not... extremely jerky, hand-held camera movement aside, one of those found footage movies (no first person here folks... just traditional third person, shaky-cam movie making on show)... which is this...

What diaries? There are no diaries? There’s one piece of recorded footage which goes on for a couple of minutes which plays a part in the main narrative but this is definitely not “fresh from the diary” in nature. And nobody’s writing anything down or recording it in a diary format either. What is up with that title? Never mind Diary Of A Nobody. This movie has no diary at all!