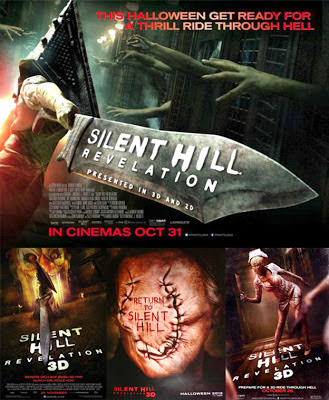 A History Of Silents

Warning: From early on there will be at least one big spoiler lurking in the fog of this review to allow me to discuss the movie properly. You have been duly warned!

The original Silent Hill game was always a dark and scary experience, but just too subtle in terms of game play (not mood) for someone like me to be able to stick with for any length of time (that goes double these days... I can’t remember the last year that I played a console or computer game, too busy writing this blog). I was never a one for survival horror games like this or Resident Evil because they involved stealth and subtlety and, in all honesty, just not enough damn ammo to do what I wanted. I wanted to shoot things in a gory hail of steel tipped ballistic carnage, not sneak around quietly when a zombie (Resident Evil) or newborn baby with a carving knife (Silent Hill in its original pre-censored version) wasn’t looking in my direction. This is why I stuck to first person shooters like Wolfenstein, Doom, Quake and Duke Nukem. Or platformers like Tomb Raider, Lego Star Wars and Lego indiana Jones... the other stuff just wasn’t my cup of freshly ground pixels.

Ironically though, I quite like the movies which are based on these games.

The first Silent Hill movie came out in 2006 and it was actually pretty good. It managed to capture the surreal... oh heck... just ‘plain bugnuts crazy’ atmosphere of the most imaginative evil coming your way to take you to a fate far worse than death, which is consistent with the source material. It starred Sean Bean and Radha Mitchell and ended on a pretty big down note... with Radha Mitchell and the daughter of her character trapped in the alternate reality of Silent Hill while Sean Bean is left in the real, physical world.

And then everyone waited for a sequel...

And then recently there came news of another movie based on the game, this time called Silent Hill: Revelation and I have to say that the publicity that I saw from this made it look like a reboot. Although Sean Bean was touted as being in it, it certainly didn’t look like it was, in any way, a sequel to the first shot at it and even Bean’s character name on the IMDB is different (there’s a fairly good reason for that, which is sorted out within the first ten minutes or so). Since I know this will make a difference to whether people will bother with the new one or not, let me just say that Silent Hill: Revelation is definitely a direct sequel to the 2006 movie... but I would add that, if I hadn’t played the game a little or seen the first movie in the series... I probably would have been a bit lost or at least, would have been less understanding of what was going on in this one.

Silent Hill: Revelation is a film which, because the marketing campaign seems to be a little dishonest, to say the least, doesn’t go out of its way to explain the various elements which make up the town of Silent Hill. It’s got a fairly basic plot, which relies on what is presumably the ‘revelation’ of the title as to the true identity of one of the characters from the first film (although it’s less a revelation and more a “ho-hum, whatever” kind of moment, it seems to me), and you won’t need to be doing much thinking about what’s happening on screen... unless, of course, you are unfamiliar with the dark and twisted territory which is Silent Hill. If anything, the plot kind of resembles the first Transformers movie, but with a mystical symbol replacing the ‘all spark’ of those films.

It’s good that you don’t have to think too much about the plot, though, because Silent Hill almost lives up to its name in that the majority of the running time is almost treated like a silent movie... but, you know, with “scary as ****” sound design. That is to say, once the basic set up is out of the way, the film becomes one long series of extended horror explorations/set pieces folding into each other like a set of Russian dolls. There’s very little let up as you are asked to pay witness to one dark, surrealistic vision after the other and, in some ways, this is the movie’s main flaw. A lot of horror or action directors will realise that to enhance the emotional weight of the action/horror sequences... you need fairly frequent breaks between these kinds of set pieces with which to contrast against. There are a few short breaks between horrors, especially near the start of this movie, but mostly it’s just 'eerie' followed directly by 'spooky', 'bloody' and “what the buggery ****” all piled on top of one another.

There’s no question the film makes you anxious and dread filled for the majority of its running time, and after all that’s what a good horror film tries to do, but I felt that a lot of the scares in this one could have benefitted by a few more scenes of ‘down time’ to make them seem even more potent when they happened. Still, it’s hard to argue that too much when the pacing in this one is so blistering.

The acting is kinda bizarre and wooden in places. I can’t work out if it’s a deliberate ploy by the film makers to echo the typical style of a standard computer game ‘cut scene’, or whether it’s just badly written dialogue in places. There are actually some real, animated sections typical of 'in game' footage shown interacting with the live action at a couple of points in the movie, so maybe that’s why. It’s kind of strange but seems to work in its own way. I just hope the animated sections weren't dropped in because the director didn't have all the footage he needed to make sense of the edit, though.

The girl playing the grown up ‘daughter’ from the first movie, played by an excessively cute actress called Adelaide Clemens, is especially likeable in the role and someone you can easily cheer for when it comes to it. Major acting talents such as Martin Donovan and Malcolm McDowell turn up in what amount to extended cameos and Sean bean has a little more to do in this one. Not loads, but he comes out better than he did in the first movie. Radha Mitchell and Deborah Kara Unger are also back in cameo scenes, reprising their roles from the first film... so you are in good hands most of the way.

The dark twistedness that is a trademark of the series is handled pretty well, including an amazing chase through a stockroom full of dolls where a tremendous CGI’d ‘pseudo-stop-motion’ animation chases the main protagonist around for a bit... although the ‘scary but sexy’ nurses from the first one are neither as sexy or scary as they were the last time around. The big knife guy seems to be treated as a less important player in this one too, although he is still quite intimidating at times. He’s pretty much similar to the big knife guy in the last two Resident Evil movies... so it’s not as effective as it could have been perhaps. I don't know which of these two games used that kind of character first.

The 3D works well in this one, the cinematography is clean (even while roaming designer grunge and decay) and the score by Jeff Danna is as effective as his score for the last one was, again drawing on themes and elements from the series of games on which the films are based. There’s also still the odd nods to sci-fi and horror genre buffs in terms of names used for places which aren’t as blatant as the last film but are still there to bring a smile to the face.

If you want a scary night out at the pictures and you were a fan of the first movie, or if you’ve played some of the games, then Silent Hill: Revelation probably won’t disappoint you too much... if however, you’re not in familiar territory walking those foggy streets, you may want to rent or buy the first movie from 2006 first in order to get a better understanding of the underlying plot references. A good little entry into the series, however, and I hope we don’t have to wait as long for the sequel to appear this time around.
Posted by NUTS4R2 at 19:57