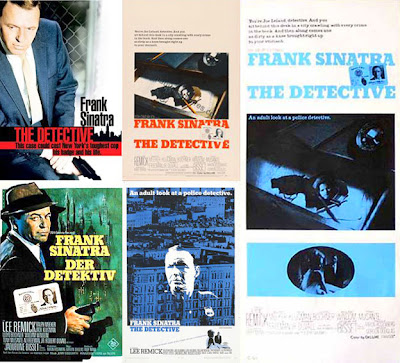 Warning: Routine spoilers will be pursued and outed.

There are two reasons why I wanted to watch the Frank Sinatra movie The Detective. One is because the score is by Jerry Goldsmith... and it’s always worth seeing how his musical cues which you’ve lived with for a while match up to the images in context.

The other reason is that I could remember loving the Tony Rome films when I was a kid and when it came to eventually catching up to the movies on DVD I found that it was actually cheaper, at around the £8 mark, to buy the two films in a box set with The Detective than it was to buy the two films individually. If there’s a concept I like best with my movie purchases then it’s “value for money”.

Now then... there’s something very spooky about my choice of viewing when I sat down to watch this film because I found out something about it just before I wrote this review that I didn’t know before, to my knowledge, and therefore didn’t trigger my choice subconsciously. I was going to watch the first four Die Hard movies, more or less back to back, for one of those longish “film series in one gulp” reviews I occasionally do. For some reason, though, I reached for the Sinatra box instead and watched this. Which is very interesting because...

The Detective stars Frank Sinatra as policeman Joe Leland, the character in the book of the same name on which this film was based, written by  Roderick Thorp. So far, so good. However, the writer also wrote a sequel about this character called Nothing Lasts Forever and, Frank Sinatra was contracted to have first refusal on the part although, when they finally got around to making it, Sinatra was 76 years old and turned it down. The book apparently tells the story of what happens when Leland’s daughter gets trapped in the Claxxon Oil Corporation skyscraper because it is taken over by German terrorists and... yeah, you guessed it. They offered the part in the sequel to Bruce Willis, changed Joe Leland to John McClane, changed his daughter to his wife, changed the corporation name to Nakatomi and renamed the story Die Hard... and pretty much launched the career of Willis in film after he’d had such a successful time on television.

So there’s that... but I didn’t know any of that when I came to watch it.

The Detective is a very unusual movie in that, and this is especially true of the time in which it was made, the narrative is a little disjointed and spans a few years before wrapping up things which look like they don’t match up and adding a certain amount of downbeat closure to things.

Even the opening is unusual in that it starts with the standard shots of a US city skyline, but it’s all upside down. Now I saw the same thing done in the excellent horror movie, Devil, a few years back, but Devil didn’t seem to have any rationale to shooting this in this manner. The Detective is really neat because, about halfway through the upside down title shots, the camera suddenly pans up and you get the lower half of the screen still upside down with the city the right way up in the top half of the screen. This is because the camera has panned up to show you that what you’ve actually been looking at is the buildings reflected in the roof of Frank Sinatra’s car as he drives to the scene of the murder which kick starts the movie. This is pretty good and I was pleased that I’d seen this movie already, just from the titles.

It then goes straight into police procedure and it’s Sinatra and his team at the 19th Precinct working a horrendous murder case where a guy has been bashed in the head and his penis cut off and flung across the room. The sequence lasts for a good quarter of an hour or so and it seems everyone and their dog are in this movie... Sinatra, Ralph Meeker, Robert Duvall, Tom Atkins (his debut), Jack Clugman... heck, even boxing champion Sugar Ray Robinson is in here. Alongside loads of “oh, it’s him/her” actors and actresses who will, no doubt, catch your attention.

However, after this scene, Joe goes to see his wife (from whom he has split up) and, as he leaves her to her friends at a party, the film then goes into an extended flashback set of sequences, lasting at least as long as the opening scenes, telling the story of Joe and his wife Karen, portrayed by the wonderful Lee Remick, and how they got together.

Then, after a while, the film goes back to the case which involves Joe's pursuit of a murderer in the gay community and this too is cut up with further flashbacks of Joe and Karen as they get married and have problems which can probably only be summed up as Karen suffering from a kind of extended nymphomania. Then Joe finds ‘the killer’, played brilliantly by Tony Musante, who some of my readers may know best from films like the spaghetti western Il Mercenario, Argento’s The Bird With The Crystal Plumage and The Last Run. I‘ve never had a great deal of time for the actor, to be honest, but he really gives a deranged and sympathetic, if short, performance here. Short because Joe presses him for a fast confession (because he’s eyeing a promotion) and he gets dealt with in the electric chair. Case closed... and we’re only halfway through the movie so far.

Then comes more flashbacks and non-flashbacks with Karen and then a second case, years later, which will end up bringing some interesting things to light, including some downbeat conclusions about the first case and a possible romantic attachment to another character played by Jacqueline Bisset.

The film is directed by Gordon Douglas who did such great work on films like THEM! and In Like Flint but who was never much one for making any elaborately attractive shots (except maybe with his work on Rio Conchos, reviewed here), or at least that’s how I’ve always thought of him. As I would expect, the mise-en-scene is adequate and the editing more than competent... nothing too special but very work-a-day and, in that sense at least, quite accomplished. You’re in the good hands of somebody who knows how to put a picture together.

There’s not a lot of action in this film... two small sequences, one involving a chase and another involving a brief but intense shoot out in an indoor car park, when Joe is targeted by people who don’t want him involved in the second case... but it’s not meant to be an action film, I suspect. It’s more of a character study of Joe and Karen’s relationship which uses the backdrop of Joes detective work and the politics of it, to further explore the way his mind works and the way that affects his home life.

Goldsmiths score is, at times, a bit bluesy and, in the action and suspense scenes, dynamic and propulsive in much the same kind of vein he used for his score to Escape From The Planet Of The Apes, only three years later, and maybe also foreshadowing his score to Chinatown too, in places. There’s not much of it in the movie. I’d guess less than 20 minutes of music scattered throughout the whole thing, but US filmmaking was a lot different in those days, and directors trusted that a lot of their movies didn’t have to be wall-to-wall score and only needed the enhancement of some good musical accompaniment at certain points. Goldsmith was a master of this talent of working out when to have music in the final cut of a film (called ‘spotting’ in the industry) and more than once argued for there to be a lot less music in a movie than was originally intended by the director. The music works pretty well here, although at certain places it gets a bit like it’s Mickey Mousing things a bit too much (Mickey Mousing is the practice of using sequences of musical notes and ‘stingers’ to directly reflect the actions taking place on screen) but at the end of the day underlines certain tensions and emotions in just the right way... not always an easy tightrope to walk.

So there you have it. Frank Sinatra in The Detective. All the performances by the cast are top notch, it’s gritty to the point of brutal in some places (for the time) and it’s a fine film. Now I need to go and watch the sequel, Die Hard, again sometime soon.