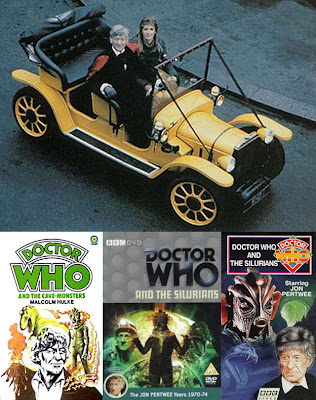 The Cave And The Bold

Well... today marks the 49th anniversary of the broadcast of the first ever episode of Doctor Who, so I thought I’d better watch a story and write a review of it. Here we have Jon Pertwee’s second story as the Doctor and I’ve not seen this since I maybe glimpsed bits of it from wherever I was playing or laying when it was on when I was two years old, on a black and white TV set... until I revisited it now. I honestly don’t know if I saw any of this as a kid or not, but little flashes of imagery did keep coming back to me as I was watching it.

I wasn’t expecting much more than a clunky piece of whimsy out of this but, once again, the serial surprised me by being fairly well written, pretty well shot and really well acted. The key UNIT (United Nations Intelligence Taskforce) team of The Doctor, Liz Shaw and Brigadier Lethbridge-Stewart actually does have a lot of chemistry... even though it was not long, after only four stories, that Caroline John (who played Liz) left the show because of pregnancy, although I understand the shows producer wasn’t looking at renewing her contract anyway. Which is a shame actually. I mean, I like Katy Manning as Jo Grant as much as the next feller, but I thought Liz was a pretty good companion too. Although she continued with the character in later decades in Who related video and audio productions, she was only seen once again in the show itself in a tiny guest spot in The Five Doctors... which is a pity. The last I heard of her was when she was reading the audio version of Elizabeth Sladen’s autobiography, as Sladen was no longer around to do that herself. Ironically, it wasn’t long before Caroline sadly passed away herself, earlier this year.

Anyway... back to The Silurians. The writing in this story, about a race of cave dwellers who are awoken and want to reclaim their planet, touches on some really interesting themes and moral questions and, in seven episodes, covers slightly different but ultimately the same ground as the Matt Smith two part Silurian story, The Hungry Earth/Cold Blood... which I realise now was more or less a rewrite of this original story but with some short cuts taken for brevity. Although, when you compare the two stories, I’d have to say I prefer the Pertwee original a lot more than the 2010 version.

There’s a whole group of familiar actors who turn up if you like playing “spot the future famous person”, including a young Geoffrey Palmer and a slightly younger than I remember him Fulton Mackay, who took me all of the first episode to place without that white hair I used to remember him for in Porridge. Also on hand, as UNIT-Captain-who-slinks-around-in-the-background-firing-off-shots and, amazingly, surviving all the way through the whole serial without being killed, is a young Paul Darrow, who many UK TV watchers will mostly remember from his turn as Avon in the much loved British sci-fi TV show Blake’s 7. It was nice to see all these kinds of people on hand to give quality performances to a show which really made use of them.

Also, Who fans take note, this story marks the first appearance of Jon Pertwee’s (and later Tom Baker’s) old faithful yellow roadster Bessie. I remember everyone used to like seeing pictures and doing jigsaw puzzles of Bessie back in the day.

The special effects are, as you would expect, a bit iffy (although not as iffy as they got a decade or more later) but the silurian costumes themselves are really top notch designs and so much better than the almost fake “pass-for-silurians” costumes which we have in the show nowadays. The design features of these suits really do look “non-human” as opposed to the “people wearing make up and a touch of prosthetics” which producers of all modern TV shows seem to think is the way to go, and which gives the aliens on most TV shows produced today a homogenous, similar look. The lack of flexibility in these old costumes still triumphs, I think, over the advantages of a lighter application of make-up, although there is a very bad performance issue with one of the Silurians on this. The more militant silurian (pretty much the same kind of character as one in the Matt Smith two parter) is faced with the problem, which his fellow silurians also have, of needing to add some movement to himself when he is speaking to show that it is, indeed, he who is speaking. Unfortunately, the actor playing this part seems to go over the top and his silurian seems to have a permanent, jittery movement whenever he’s on screen, like he’s got Parkinson’s disease or something. This really isn’t a good look for the character and it’s such a shame that the story in general is cursed with, effectively, a “mad silurian on acid” performance when the rest of the race are portrayed much more sensibly by his colleagues. Of course, he might have been told to act this way because of the nature of that particular silurian’s character, I don’t know, but I was surprised the entire performance on this one is like it is.

That issue aside, though, it’s a great little story and doesn’t shy away from showing things happening on a much larger scale than I‘m used to seeing in the modern incarnation of the series. When the silurians release a plague on mankind, for example, they actually show it happening all over London in various location shots such as a busy station. I’m guessing a lot of the “extras” in some of these shots weren’t aware that they were being extras in a TV show at all, and I’m not sure you could get away with that approach today, but it certainly pays off in here, especially in a crudely edited but brave attempt at a montage sequence showing The Doctor attempting to discover an antidote and UNIT working “crowd control”, superimposed over scenes of people collapsing in various UK locations. Great stuff.

Not one of my favourite classic Doctor Who stories by a long shot but definitely an enjoyable romp with a very serious edge to it (even if Jon Pertwee keeps doing his “funny face” look from Worzel Gummidge whenever he’s zapped by the third eye of a silurian). Definitely recommended and a nice reminder of the origins of the creatures who are still with us in the show today (and I am looking forward to seeing the return of my favourite of the “modern silurians” in this year’s upcoming Christmas special). Next stop for this Doctor Who fan will be me revisiting a story that definitely had something of a terrifying effect on me as a nipper, although I can’t remember any of it except the iconic look of the monsters. Join me again with my Doctor Who head on soon as I delve into the classic story of... The Sea Devils... string vests n’ all!
Posted by NUTS4R2 at 19:26