We Are The Night (Wir Sind Die Nacht) 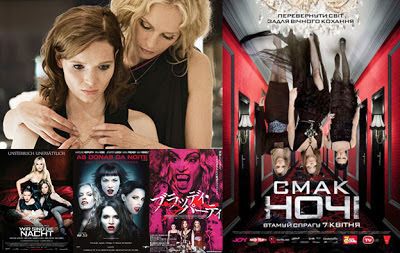 What a great little discovery. Sometimes, twitter can be a good place to learn about things, as is the case here because, if it wasn’t for @filmforager’s review of this movie on her site a couple of months back, this film wouldn’t have even been a blip on my radar. As it is, I feel like I’ve been allowed to unearth a small movie gem I might not have ever known was buried in the celluloid history of the vampire film... although I might have discovered it in ten years or so down the line when all the books documenting the great vampire masterpieces of our era make mention of this flawed classic... as they will.

Flawed classic? Well yes, there are a couple of minor things about this which, on reflection, could have been attended to a little better. But these things in no way diminish the strong, stylishly made movie that is We Are The Night.

The movie opens strongly with a montage of old photographs and then paintings with three of the four female leads of this movie montaged into them to demonstrate that these ladies have obviously been around, in the case of one of them, for gazillions of years... well, hundreds anyway. This is followed by an even stronger opening which seems quite fresh but is actually a main staple of certain classics of the genre... just updated a little.

In the 1922 movie Nosferatu, for instance, which was loosely based on Bram Stoker’s Dracula, the tradition of the vampire chartering passage on a long journey and feeding off the crew and passengers and arriving at the destination with all the living inhabitants dead, was already being established. The secondary opening of We Are The Night sees us with the three vampire women on a plane in which they’ve slaughtered all the crew and passengers. There is some chatting and posturing for a while until the three bail out of the aircraft (without any parachutes, of course, these are vampires after all) and the plane is left to crash. Of course, the fact that airline journeys are not exactly long journeys these days and so the ladies do not need the blood of the passengers to survive, tells you everything you need to know about the casual attitude these vamps have to the humans with whom they share the world.

After this we meet Lena, who is a small time thug living on her animal cunning in the streets of Berlin. It doesn’t take long, though, before her “special potential” is realised by Louise who has a lesbian crush on her and vamps her up to immortal status quicker than you can say “Mina Harker needs an arm full”. The iconic looking Louise, played brilliantly by an actress called Nina Hoss, is the matriarchal leader of this particular group of vampires, and recalls in some ways the opulence of Delphine Seyrig’s Countess Bathory from Daughters Of Darkness, perhaps filtered through Catherine Deneuve’s character in Tony Scott’s The Hunger.

Actually, the performance of all the four main “vampire chicks” in this one is rivetting. Each one has a kind of implied past, with one of the girls who was a silent film actress when she got vamped up by Louise (there’s a lovely line about her not being able to survive the transition to talkies anyway, in this) who has a really moving scene with an old lady in hospital who... well I don’t want to spoil it for you. You’ll get there ahead of the scene but it’s still lovely and emotionally tragic.

I love the world these gals live in too. The entire race of vampires now on the planet are female, apparently. All the male vampires were too stupid to not be caught and killed (there’s a lovely reference to Dracula right there) and the female vampires took care of the rest because they were dangerous in their stupidity. I like this concept. However, it also presents us with the two problems I have with the film.

One is... for a movie which is so into lesbian/bisexual vampirising and hedonistic living, there’s no actual overt nudity in the film and, though it’s certainly not necessary and doesn’t in any way spoil the experience as a whole, I think a couple of scenes of unbridled nakedness would have raised the picture up another level and given the characters a certain sense of casual adulthood as opposed to being, in some cases, just perpetual teens out for a good time.

The other problem I had with this was the fact that it doesn’t take long for things in this movie to fall apart big time and the girls are just trying (and mostly failing) to stay alive by the end of the picture. One of the characters does make a reference in deference to their habit of slaughtering people willy-nilly in which she states that, “we were never much good with clearing up after ourselves”, but this really is no excuse. These women have been surviving for an incredibly long time, especially Louise, so it’s a bit much to believe that a mere police raid on their hotel lair due to some sloppy, post-slaughter tidying up, is the beginning of the end for them. This doesn’t quite add up in my book when it comes to story logic.

However, this small error in judgement, and it’s only my opinion, in no way diminishes just how good this movie is. it’s so crisply shot with some nice, long and slow takes (this is definitely not MTV style editing here folks) with some smooth flowing tracking shots of some wonderful sets and locations which are beautifully lit. The hotel lobby wouldn’t look out of place in the aforementioned Daughters Of Darkness, for example, and the dinosaur park where the nightclub sequences near the start of the movie take place is just gorgeous.

There are little details about the characters as well which pay off if you’re paying close attention. It’s nice to see one of the girls watching Frits Lang’s Dr. Mabuse Der Spieler (reviewed here) for example and you get the sense that the character watching may even have been one of the stars, forever immortalised as a vampire. Well, maybe not forever but... well, if you watch the movie you’ll see. There’s seriously a lot of nice little character quirks going on in this film and some wonderful little death scenes too. One, which involves a page torn from a book is a nice little visual moment, for example.

In conclusion, a wonderful little movie, beautifully shot with some gorgeous colours, expert performances from the actors, a haunting score by a composer I’ve not heard of called Heiko Maile (criminally unreleased commercially, it seems, although the haunting main title song, Self Fulfilling Prophecy by Scala and Kolacny Brothers, is available on itunes for 99 pence) and tons of high fashion, vampire-cool posturing. If you’re are any kind of fan of vampire movies in general, then this is one you’re definitely going to want to catch up with at some point. A definite recommendation from me and don’t forget to check out filmforager’s review of the film here.