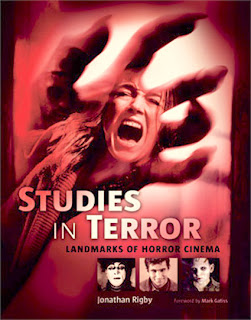 I don’t often review the books I read. Mostly because there’s always “the next film” to write about and sometimes I just don’t have time to do absolutely everything. However, I just wanted to give a little shout out to this book, Studies In Terror: Landmarks Of Horror Cinema by Jonathan Rigby because, although I have my usual reservations about this kind of tome, I did find it very helpful and had a few good times off of the back of it.

I did a seven day countdown to Halloween back in October with a different horror movie reviewed every night. Quite unusually, for me, I actually liked pretty much every movie I reviewed for that week and I’d seen none of them before (also a bit unusual). Three of those titles were watched and included from among a fistful of movies that I’d not heard of before reading this book... so if it hadn’t been for this invaluable volume, I wouldn’t have been able to include Pontypool (reviewed here), Outcast (reviewed here) and Splinter (reviewed here) in my Halloween week reviews.

Now this book does have some large gaps in that the author is more into “favourite moments” from his favourite horror films... as opposed to what many would regard as essential. The original Universal incarnations of Dracula and The Bride Of Frankenstein, for instance, aren’t even included. Horror purists are really going to be driven crazy by many such omissions like these. To be fair to the author, though, he does at least try to tackle these omissions in his opening salvo and his insistence that the book is a collection of “moments of terror” is, at least, a token response to the obvious one that you also have gialli or common or garden thrillers highlighted over some of the more ‘classic’, actual horror films he could have included.

He kinda won me over. This is an excellent book and whatever you may think of Mr. Rigby’s skills in the ‘list compiling’ department, he does have a very good eye for digging out some really great movie experiences which, so far, have all turned out to be well worth my time. I was also secretly pleased he was happy to include a couple of movies which I personally would consider classics of the genre, but which writers of such compendiums seem to be largely ignoring so far... namely Werewolf Of London and The Descent.

The design of the book is very pleasing to somebody like myself who likes a simple, functional structure to the reading material on offer. Each decade from the early 20th Century up until present is represented, with a little introduction on the decade in question. This is followed by a load of movies, each of which take up exactly two pages of description of his favourite moments of that movie, along with a small overview on what else was going on simultaneous to this movie (including any influences it may have had), an incomplete set of statistics of the film (director, some of the main actors, composer etc.) and then a tiny sampling of extracts from reviews of the film, almost all of which are cotemporary to the time in which the film was released. This last little section from each movie is something to particularly relish as it does include a lot of very bad, ill tempered reviews of movies which have outraged various reviewers... many of which have gone on to become the classics of today. Wonderful stuff.

Once I’d accepted the inclusion of such ‘totally non-horror” movies as Les Diaboliques and Psycho 3, I was able to allow myself to enjoy reading the work of someone who has especially good taste in movies and the way in which they get under your skin. Using the option of ‘buying stuff really cheap for a couple of quid each’ at Amazon, in combination with some of the films in this book, I ordered not only the three I mentioned above, but also The Skull, Anatomie, The Tenant and Left Bank, and am greatly looking forward to watching and reviewing those ones for you also.

All in all, a very different kind of book than I was expecting, and not just your run of the mill ‘book of lists’ that have passed for expensive paperweights in recent years. Once you can get past the worrisome and always problematic issue of the author’s twisted view of what defines a horror movie, you will find this book well worth your time and a much more helpful book than some others you may have resting eruditely on your shelves of late. One word of warning though... because of the nature of the main thrust of this book in finding the best, unsettling moments, this one does kind of weigh in as a massive book of spoilers. While I was grateful for the discovery of Pontypool, for example, I knew what was going to happen to one of the characters long before it actually does. This is a shame but it is a kind of double edged sword so, I guess its “caveat emptor” time as to whether you want to risk the trade off. I’m glad I did... and can only recommend this book heartily to any fans of horror movies out there.