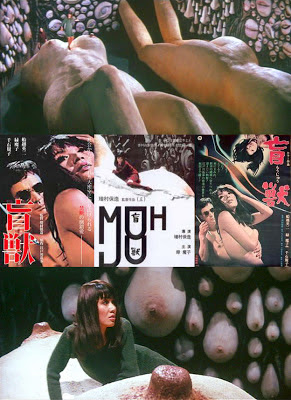 Sting In The Braille

Warning: I need to discuss this film properly... which means including the ending in my discussion. So definite spoilers here.

This is an odd little film which could have been really great if it didn’t stray too far the wrong way into territory that threatens to be controversial but which, instead, just highlights a certain naivety on the part of the writer. It is, however, worth watching because, although it doesn’t really cross over into die hard surrealism in its realisation of its themes, it is kinda interesting and, certainly, draws the viewer into a world which is wholly unique to the film.

It starts off with some quite racy, black and white S&M (as it was known in those days) flavoured still photographs of the central female protagonist Aki, as played by the lovely Mako Midori, which it turns out are part of an art gallery exhibit of shots of her. She is a model and, all through the film, her voice is heard as the narrator. When she goes to visit the gallery showing the controversial shots of her naked with chains and being stimulated by other women, she comes across a blind main exploring her sculptor quite enthusiastically with his hands. As she watches, fascinated, with the way he touches her ersatz naked body, she begins to feel a sexual connection to what he is doing which scares her and she rushes off.

After some time, when she arrives home from a photo shoot, she hires a masseuse and it turns out to be the same blind man who, it transpires, is our central antagonist (and also male protagonist, depending on how the viewer’s perception of him changes over the course of the movie), Michio (as played by Eiji Funakoshi). He chloroforms Aki and kidnaps her, with the help of his mother.

When Aki regains consciousness she is in darkness, for a while,  inside Michio’s giant studio. Giant is literally the word, too, as the landscape consists of walls made from Michio’s sculptors, which is his hobby and life’s work. Various walls and planes are made up of collections of eyes, ears, breasts, arms, legs, noses etc and in the centre, there are two giants sized torsos on their backs, where the characters in this movie spend most of their time.

Michio has kidnapped Aki to sculpt her from touch and will not release her until she co-operates. After trying to escape a few times, she does so and Michio continues his work of making art which is meant to be touched. However, after an escape attempt leaves Michio’s mother dead by his hand, Michio rapes Aki and has sex with her constantly and... here the narrative takes a turn.

After a while she falls in love with him and welcomes his caress.... and the two continue to make love all day and night long as their way of existence. Aki goes blind too, here eyesight atrophied by spending all her time in a darkened studio (actually, the film and set is lit with neutral greens and blues which makes for an interesting viewing experience in itself) and their sexual explorations continue until they both are sated and need more intensity. This continues with explorations of bondage and whips, then small steps into knife and blood play, followed by deep gouges with twisting knife wounds and eventually, to the point here Aki begs Michio to lop off her limbs... all in the name of sensual pleasure and the exploration of the senses. Michio stumbles his way to his tools, gets a big mallet and knife and obliges, before stabbing himself to death.

Now this is actually nothing new, of course, but maybe for late sixties cinema this was entering new territory. While the film, as I said, verges on surrealism... this is only a shallow surface surrealism which can be found in the set design and, possibly, in the fact that the tale is being narrated by somebody who is presumably dead... although the possibility of any spiritual or pseudo-religious ponderings do not seem to be what’s in the mind of the creative team here. There is visual metaphor to see the unseen removal of Aki’s limbs by having the correlating limbs of her sculptured figure drop to the studio floor with a heavy crash with each blow, but this is about as “loose” as reality is allowed to get in the film and, obviously, it comes right at the end. Also, I suspect the Japanese penchant for visual metaphor in their culture, especially cinema, renders the deliberate approach towards a surrealistic viewpoint redundant in the case of this particular movie.

The story of two people getting used to and jaded by the senses to the point when their harder explorations of these senses bring them the ecstasy of death is something I’ve already seen done before and, perhaps I should be angry that the director has irresponsibly assumed that a relationship which comprises, or indeed includes, a BDSM context, is something which two people would allow to keep going past their own limits to the point of serious injury or death. However, while it would be wrong for people to take this film with anything other than a pinch of salt and hopefully a realisation of the damage both to freedom of sexuality and the basic right to consensuality that is a must here, I have to say that this film mostly just comes off as a little naive in response to the areas within which its protagonists are purported to explore.

All that aside, though, it’s a really nicely composed  little movie on a technical level with some stunning camera set-ups, although I really am not sure about the acting. I’ve read that some people have found the performances in this riveting but, honestly, I found them just a little over the top and wide eyed to be honestly convinced that Aki would have such a sea change in attitude half way through. This wasn’t a set of credible performances for me but, that doesn’t really matter because, to be fair, the overall effect of the film is to drag you into the centre of it and not let you out until it’s done. This film has been compared to In The Realm Of The Senses and, although I haven’t seen that particular film, what I have seen of it leads me to believe that this could indeed be a good companion piece for it.

I can’t completely bring myself to recommend to anyone a film which so blatantly portrays the S&M content along such an ignorant and negative path (although the film doesn’t presume to make specific judgements, I am sure the majority of the audience would in response to the lack of specific conclusions) but, if you can get past this element, then on an artistic level the film is, well, not a masterpiece but certainly a visual triumph which any fan of cinema would want to see. Give it a go... if you’re not feeling too jaded.