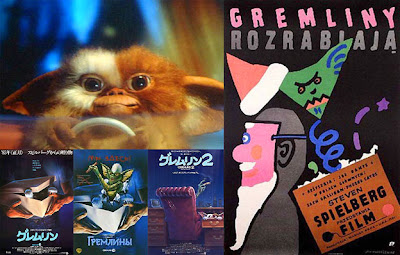 For my other Christmas double bill I chose the two Gremlins movies, the first of which is set at Christmas.

Gremlins
I remember all the hoopla surrounding this film when it came out, which was much more focused on the “Steven Spielberg presents...” part than any contribution by the wonderful director Joe Dante. There was an absolute obsession with the cute furry creatures in their “mogwai” stage and I remember all the kids used to have either a plush, furry mogwai or a rubber, flexi-gremlin figure. If you went to the seaside and looked at any crane machine, these things were filled with little mogwai. This film caught the public imagination and didn’t let go for a while and the first movie, at the time, deserved its success, I think.

Starting off as a little tongue-in-cheek urban myth from the Second World War, if I’m not mistaken, the idea of gremlins as the creatures who were always blamed for malfunctions in machinery in that period became very popular at the time. These days if something goes wrong with a piece of software we say it’s got a “bug” in it... if something was going wrong with something in those days it was a “gremlin”. This was lovingly personified in an old episode of The Twilight Zone (Nightmare at 20,000 Feet) where William Shatner gets hysterical watching a small “gremlin” taking apart the engine of the passenger plane he is travelling in and it was this story which was later remade for release the year before Gremlins in 1983 and used as one of the segments in Twilight Zone: The Movie. The production of the  movie presumably sparked the imagination of Spielberg enough to get Gremlins off the starting block and he hired Dante, who had directed a different segment of the Twilight Zone movie, for the job.

The film is a bit of a classic and, though I found it had dated quite a lot since the last time I’d watched it, I still think it’s a classic piece of movie making. I’m not going to summarise the movie here too much, suffice it to say that when free-lance inventor Randall Peltzer buys the mogwai for his son Billy for Christmas, the three “rules” that one must never break when looking after such a creature are quickly and accidentally broken, which leads to the birth of a fresh spawn of mogwai (from water) who then gestate and metamorphose, once they’ve eaten “after midnight” into creatures that are, way more than mischievous. Indeed, I remember there being some quite hard censorship objections to the film which made the national news at the time because, although it’s clearly intended for a young audience, it was slapped with a 15 rating due to some quite nasty sequences involving gremlin death (gremlin pulverised in a liquidator, gremlin shredded in a waste disposal unit, gremlin exploding in a microwave etc) which worried the hell out of parents and censors at the time.

And that’s the little trick of Gremlins, in that it takes the, now familiar, key signatures of Dante’s work in the lighthearted touch of an old Warner Brothers cartoon sensibility but then swiftly, about half way through, turns into a much more darker entertainment, much more akin to a horror movie, as the film's main human protagonist fights off a gremlin who is trying to chainsaw him to death, for example.

Still, if you’re of an age when you are not going to get freaked out by such stuff (I must have been 16 at the time I saw it on its original cinema release) then it was a great little movie and packs a lot of industry in-jokes in such as having people like composer Jerry Goldsmith appearing in a few shots, along with The Time Machine and the original Robby The Robot from Forbidden Planet... indeed, the much used Robby even does some lines from his debut appearance in this film if you listen carefully.

Talking of Goldsmith, the score is composed by him in his usual effective and entertaining style (he was a frequent collaborator with Dante and was able to capture just the kind of atmosphere that was required) and its fitting that he was called in to score this as he composed the music for Twilight Zone: The Movie which included a little melody, orchestrated for dominant fiddling, for the gremlin on the wing story which Goldsmith appropriately used as the basis for the main gremlin theme in this movie.

It’s still a great watch of a movie and is full of fun, moving sequences of unabated cuteness, quirky and dark horror and it has a beyond fun score. Definitely one to watch out for if you’ve never encountered it before.

However... then came Gremlins 2: The New Batch... and my view of that one remains exactly the same as the only ever time I saw it, when it was released in cinemas back in 1990.

Gremlins 2: The New Batch
Gremlins 2: The New Batch has more of everything in it, concentrated in a single more claustrophobic space of a tower block which is obviously inspired by the Trump tower, known as the Clamp tower. Indeed, there’s even a main character clearly modelled on Trump in the movie. So the main human protagonists from the first film, Billy and his romantic interest, are now working in this tower in the big city, where they once again encounter the original mogwai from the first movie, Gizmo, who is once again accidentally forced to spawn a mischievous and deadly infestation of gremlins which the humans must try to stop leaving the tower and reaching the streets of New York.

But where, say, a film like Die Hard worked better from limiting the setting, the second Gremlins movie just becomes hamstrung by the indulgence of the director who is allowed to let his toys out to play in earnest. There are the usual movie references (Christopher Lee playing a mad scientist who is, at one stage, seen carrying one of the original seed pods from the 1950s version of Invasion Of The Bodysnatchers) but somewhere in the midst of all this excess of cute gags designed purely for laughs, the film kinda forgets to make us feel anything or let us care for any characters.

Worse, it betrays the memory of the first film where characters you thought were killed by the Gremlins are brought back (aw, they were only slightly injured after all) and even the brutal but effective sequence where Phoebe Cates character Kate in the first film explains exactly why she hates Christmas... is spoofed and made light of in this movie in a sequence that leaves a bad taste of condescension in the mouth.

Even Goldsmith’s Gremlin Rag has been transformed by the composer into something that is a little more like a “pop-shortening” of the original theme and it’s far less effective than his score to the first movie... and certainly less fun.

All in all I generally like Joe Dante and think films like the original Gremlins, Matinee and Looney Tunes: Back In Action are all little masterpieces... but I think Gremlins 2: The New Batch is probably one of his all-time worst movies and it feels much less subtle and overplayed than the original classic.

At the end of the day, most fans of the first movie are going to want to see this one due to the memories of the first, but I really wouldn’t recommend this second, over-blown yet watered down confection to anybody. Stick with the original movie and give this second a wide berth.
Posted by NUTS4R2 at 14:26