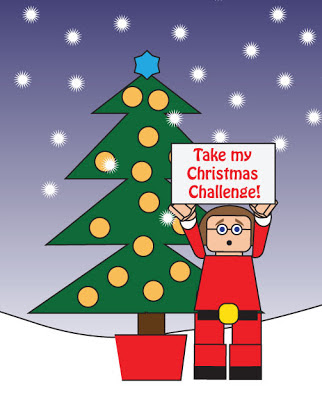 My “hopefully” fiendish Christmas Quizwoz (aka The Quizard Of Woz). Mostly film and TV questions but some books and stuff thrown in for good measure too. Absolutely no prizes, but if you send your answers here... nuts4r2@hotmail.com... I’ll list the people who got the most answers right... along with the actual answers very soon after the closing date (please remember to say how you want to be named in case you are a high scorer).

If you're gonna have a go, please get your answers to me before noon on New Years Eve, UK time.

Q1.
Which two directing K’s made contemporary movie versions of Shakespeare’s Hamlet, and what were the two films called?

Q2.
What is a common factor, which is fairly unique in films, of the 1952 version of The Prisoner Of Zenda, the 1991 version of Cape Fear and the 1998 version of Psycho?

Q3.
What do Bob Holness, Barry Nelson and Daniel Craig all have in common?

Q4.
Mechanismo and Dangerous Days were both early working titles for which movie?

Q5.
What do Robert Siodmak, Don Siegel and Andrey Tarkovsky have in common?

Q6.
In which movie did Keira Knightley and Natalie Portman first appear together?

Q7.
The two Sesame Street characters Bert and Ernie were named after characters from which seasonal film favourite?

Q8.
Keye Luke took over the role of which oriental detective in the last of a running series of films about the character, and which actor did he replace?

Q10.
To date, in Doctor Who, which of The Doctor’s companions has appeared, at one time or another, with the most incarnations of The Doctor?

Q11.
In television, perceived competition from Davy Jones in The Monkees at a similar time slot lead to the creation of which character for the second series and onwards of the original Star Trek?

Q12.
The two main protagonists from Linklater’s Before Sunrise and Before Sunset make an ambiguous cameo appearance in which animated movie?

Q14.
Ron Moody appeared as a character in the pilot episode of a TV show, but was replaced by Roddy McDowell in the actual series of what?

Q15.
In the Toho classic that had an alternate US title in one of its early releases as Godzilla VS The Thing... who/what was revealed to be The Thing?

Q16.
“Man Is The Warmest Place To Hide.” Which 80s movie had this tagline on the poster?

Q18.
The title of which Michael Crichton novel (and subsequent film adaptation) is an homage to a famous story by Arther Conan Doyle?

Q19.
Which Spaghetti Western is a remake of one of the Zatoichi (The Blind Swordsmen) films?

Q20.
Noel Neill replaced another actress from the second season onwards (1953 - 1958) on a TV show playing the same role which she’d formerly played in two Columbia serials in 1947 and 1950. What was the role?