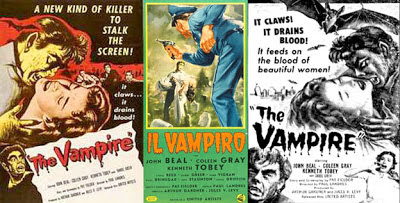 Warning: Spoilers oozing ostentatiously
from the fangs of this review...

Not to be confused with the 1935 movie, Mark Of The Vampire, nor the 1957 movie, um, The Vampire, this one is another great B-movie discovery, in as much as I was expecting it to be really dreary when actually it’s quite entertaining and a lot more technically interesting than I expected it to be.

When young, single parent Dr. Paul Beecher goes to save the life of a dying mad scie... er... doctor, following the opening teaser and credits of this movie, he fails to do so but not before said doctor has thrust upon him a pill jar with the somewhat confusing, or at least quite non specific, dying words... “The pills! The pills.......” Dr. Beecher thrusts them into his jacket pocket and the pills in question are soon forgotten. At least forgotten long enough for the doctor to ask his daughter to fetch his migraine pills from his jacket pocket later that same evening. Which she obviously confuses with the "other" pills which coincidentally happen to look exactly the same. After taking the first pill the doctor blacks out for a spell, overnight, but the next morning he finds one of his patients, who has a weak heart, has been atttacked by someone/thing during the night.

The good doctor travels to the bedside of his patient and, when he wakes her from her sleep after noticing two tiny puncture wounds on her throat, finds that she is so afraid of him that she has a heart attack and dies. Now I don’t know much about doctoring but that’s some lousy bedside manner.

Don’t you just love it!

This film is very much a product of it’s time because it blends 50s-science-gone-mad with a Jekyll and Hyde plot and then mixes in just a little of the vampire legend purely, it seems, to add a little elegance to the proceedings... although there’s nothing elegant about this particular vampire... but I’ll get to that in a minute. The Jekyll and Hyde format is the really relevant plot element here, it has to be said, because, asides from having some kind of weird B-movie connection to a viral condition extracted from vampire bats, the many legends and traits surounding the typical silver screen vampire are all absent here. It’s more about a reworking of the Jekyll theme but, in this case, with a reluctant doctor who has become addicted to a specific set of pills (and once again... they’re Vampire Pills, folks) but who hasn’t invented these things and who hasn’t brought down this thing on himself.

Okay... so it sounds really cheesy, and it probably is, but I really got a lot more out of this movie than I was expecting...

Right from the outset, for example, the shot set ups are very clean and interesting and there are some nice camera moves and angles used throughout the film as it progresses. During the pre-credits a young boy delivers an animal to the dying doctor, presumably as one of his hideous experiments which will give the world something it’ll really need... such as "vampire pills", for example. When he rushes off on his bike to fetch Dr. Beecher, the opening credits play out to a beautifully focussed, extended, single take moving shot of the boy riding his bicycle three quarters on to the camera. It works really well.

That being said, I did find the placement of some of the actors in certain scenes to be a little less inspired but for the most part the performances are a hell of a lot bettter than I’d expected, too. Kenneth Tobey, who’d already played the young, military hero from the original The Thing (aka The Thing From Another World), and who some long in the tooth readers may also remember from an old TV show called Whirlybirds (among many others... was this guy ever out of work?), is likeable and suitably intense in the role of the local, concerned and flirtatious sheriff. It’s John Beal as Dr. Beecher who really deserves the applause though... as his character slowly starts to worry and panic about the fact that he might be the mysterious vampire that’s chomping on everyone’s necks in town. Not to mention emoting his gnawing addiction to the vampire pills he doesn’t want to swallow but knows he must... or become a raving, animalistic creature of terror.

Oh yeah, and about that vampire make up. It’s terrible. Less like the normal kind of creature one associates with the “sophisiticated vampire” as portrayed on TV and in film. This is more like a man beast with big old ‘eyebrows of doom’ which make him look like an agitated Lou Ferringo on a bad make-up day. I actually found it quite a shame when the excellent John Beal had to go around like this. He’s almost unrecognisable as the original actor and... well... let’s just say that this is one of those B-movies where the monster make-up tends to let it down quite a bit.

Also... “note to movie makers”. If you’re going to cut to a close up of a dead girl showing the wounds in her neck where she got “vamped up”, be sure you don’t take it so close that you can see her pulse still beating in her throat. Possibly should have just cut to a still photo for this moment, methinks.

Okay, so before I leave you I’ll just point out one more great thing about this movie because, although it is a little laughable in a lot of places, it’s also quite a little gem in some ways.

One of those ways is Gerald Fried’s amazing score. Lots of brooding and then pounding “ostinato of impending death” kind of moments which really works well and takes the edge off of those moments when it maybe gets too unintentionally funny for the audience to be able to suspend disbelief for the required amount of time. It’s not bad as a standalone listen either and if you can get hold of the limited edition double CD put out from Film Score Monthly years ago, which includes this score and three other Fried scores from this era and genre (The Cabinet Of Caligari, I Bury The Living and The Return Of Dracula) then you may be in for a pleasant surprise if you’ve not sampled this composer before. Definintely one of my better blind buys at the time.

And that’s really all I’ve got to say on this one. If you can get past the bad monster make up then this movie is a must have for fans of 50s B-movie sci-fi horror. If that’s not your thing then maybe give this one a wide berth but I suspect a lot of my readers here might be up for this one. The film is on a USA Region 1 Midnite Movies edition disc double billed with The Return Of Dracula (reviewed here) and if these kinds of movies are your thing, then this edition is definitely worth picking up. Right, who’s necks?