Doctor Who - The Snowmen 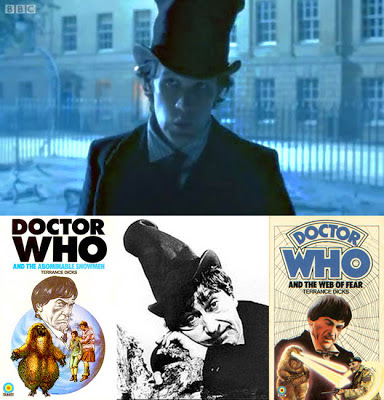 Warning: Oh yes. A positive web of fearsome spoilers here in this one.

Okay then. That was bloody good.

I’m so glad and, frankly, relieved that, after complaining about four of the last five episodes in the current series, this mid-season Christmas special turned out to be... well... a little bit special after all.

This is probably going to be a fairly short review because I’ve really not very much to complain about and everything to praise... except for one thing (oh c’mon... you knew I was going to complain about one thing, didn’t you?) and that is... why the heck is The Doctor being such a sulky, stick in the mud after losing “The Ponds”. I’m not sure you can really go and sulk in Victorian London for so long and change your basic character to one of so much “bah humbug” as that. And then to change it back in a flash... that’s pretty silly. I mean, okay, you can use the riddle of the double death in this season of a character (and possibly more... will Moffat stop at just two almost impossible deaths?) as impetus to bringing The Doctor out of his sulky rut... but if you ask me the gentleman was perhaps protesting too strongly anyway, in certain sequences.

So anyway, other than that, there’s so much for people to take away and ponder from this episode...

There was the return of the lesbian silurian Madame Vastra and her wife Jenny Flint, running around London with Strax the Sontaran (all three of whom first appeared in A Good Man Goes To War - reviewed here) and who I would still like to see more of. Then there was the brilliant new assistant who first appeared in Asylum Of The Daleks (reviewed here), the first episode of this season, and there to give rise, apparently, to the kind of nerdy timey wimey and, indeed, timey-whiney attitude that stray reviewers such as myself (especially myself) are apt to engage in when it comes to complaining speculation about the tying up of loose threads (often in a less than satisfactory manner, I might add) in the Moffat shows. But thats okay. It gives us something to keep us busy complaining... so that’s all good.

Then there was the great idea of intelligent snow that mirrors thought and is looking to create a more stable being to wreak havoc on our tiny planet... and it’s at that point very early on in the proceedings that I should have figured out who the real villain was, but it took a little while longer and I can kick myself a little really because, when I first saw the new shots of the doctor wearing the top hat I thought to myself it was very reminiscent of another long gone Doctor who I remember being drawn in a very similar fashion in reprints from various Doctor Who annuals when I was a kid.

Okay, so the theme for this episode, and perhaps this series is, if I’m not very much mistaken... and I might well be, let’s face it, I’m probably wrong almost as often as I’m right on this stuff... is my favourite Doctor, Patrick Troughton... the second Doctor. Honestly, the title The Snowmen was already reminiscent of the title of the story The Abominable Snowmen, after all, so it really shouldn’t have been that much of a leap for me.

Pennies began to drop only when The Doctor mentioned a good strategic attack plan would be the London tubes in 1967... which gives them time to set up shop just before Troughton’s second pop at this villain in the tubes of London in 1968. Then, when the GI initials on the card, that Richard E. Grant’s villainous character was giving out, were properly revealed as being The Great Intelligence... that was all the confirmation needed. The Great Intelligence was the villainous “thing” controlling the Yetis in the two Troughton adventures The Abominable Snowmen and The Web Of Fear. Woohoo... are we heading for our very own Yeti story at the culmination of this season? Are we heading towards a special edition of the programme where The Doctor and Clara will be CGI spliced directly into the action of whatever surviving footage there is of the Troughton episodes of The Web Of Fear in much the same way as the Deepspace Nine episode Trials And Tribbleations CGI spliced the DS9 crew back into the classic Star Trek episode The Trouble With Tribbles, all in time for The Doctor’s 50th anniversary celebrations in November of next year?

Well, probably not that last, I suspect. Wishful thinking, the CGI splicing bit because, frankly, this is the BBC not Paramount Pictures... it probably costs a bomb to do that kind of thing well. But, you know, if they do go down that path... you heard it guessed here first!

Okay... so there was all that in this episode... what else?

Well, everything else, actually.

A bit of magical wonder as Clara Oswald Oswyn trails The Doctor to his secret, cloud hopping TARDIS lair (oh, okay, two things I didn’t like then... the new TARDIS interior sucks, it has to be said, in comparison with the last two). A bit of the old run, jump, monologue about gobbledy-gook physics and then run around a bit more... which is always good for screen time in Doctor Who (and talking about going on about Doctor Who... can they please stop pushing those two words throughout the latest series please... okay, so that’s three things I didn’t like then). The dialogue was fantastic, with some brilliant high comedy in a three hander between The Doctor, Clara and Strax as the audience are introduced to the inherent properties of a “memory worm” in, probably, the most humorous way they could. The framing was clean and the editing pacey and coherent (coherent is good and not always something which can be counted on these days, to be honest) and the music, elegant and melodically Victorian, was very impressive... with Murray Gold’s Eleventh Doctor sub-theme only being pushed about three times in the episode, saved for the occasions when The Doctor was doing something extremely... well... Doctor-like. Which is what good leitmotif should do, I guess. There was also a nice but of musical parody when The Doctor was pretending to be Sherlock Holmes where Gold wrote and orchestrated a cue in a nod to the music being used currently on Moffat’s other succesful TV show, Sherlock... so that was a nice bit of business.

Okay, so I’m not going ot labour the point here... this episode was a marked change in tone and pace (by which I mean it wasn’t deadly dull like a lot of the episodes this series) and overall, this and the usual promise of puzzling things to come, which I’ve fallen for yet again (even though Moffat usually lets me down big time with his end games) is enough to keep this viewer on board for the rest of the series, for sure.

Really strong episode. Well worth your time and especially if you’re a fan of the Troughton era... now if they can just bring Jamie and Victoria or Zoe back for the finale, then I will be fairly happy. Great episode... well worth a watch. Can’t wait to watch again on DVD.