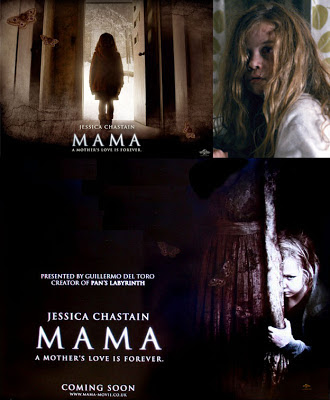 Mama is a movie written by Andrés Muschietti, Barbara Muschietti and Neil Cross. A Spanish/Canadian production shot in English, I’m guessing it’s inspired by a three minute short the same director did a few years back, of the same title (although I haven’t actually seen the short myself). It’s also just about as good a modern era ghost story/horror film as you’re likely to see these days.

The film starts off in tragedy as a man who has just rampaged and murdered his wife, takes his two very young daughters far away into some snow covered woods to kill both them and, presumably, himself. They stumble into a deserted cabin and then... something happens to the man.

After 5 years of spending all his money on looking for the man and his two daughters, the man’s brother Lucas (played by the same actor, Nikolaj Coster-Waldau) finds the two young girls who have, by now, gone almost totally feral. However, if you were following the opening titles sequence of children’s drawings with the attention you should have been paying, you’ll know there’s more to the story than that. As Lucas and his sexy ass, rock-chick galfriend Annabel (Jessica Chastain) strike a deal with a therapist working with the children to win custody of the children on the condition that they move into a very specific house the therapist chooses, things start to get decidedly spooky and, oh heck, drop dead scary as the film ticks away at a very even pace, designed to chip away at any resistance you have to the regular scares of the horror movie environment.

While this movie does have plenty of “jump shock” moments in it, it’s the slow, lurking sense of dread that keeps your delicate, viewers psyche on the edge of its fear precipice. The storyline is pretty much a retread of dozens of other ghost tales from the past but, fortunately for all involved (and especially fortunate for the jaded, modern horror movie audience), the film is stylishly put together and, although there’s a lot of CGI involved, it’s much more creatively used and is actually quite good for a change. When the ghost is finally, properly seen, in one of it’s many unique manifestations, the director has no qualms about showing it off properly and the special effects are much more reminiscent of the dark CGI fantasy work featured in the films of Guillermo del Toro, who is credited as executive producer. I’d say that I would recognise his hallmark stamp a little on the film but, then again, I’m just not too confident in exactly how much direct contact and impact on the final product the executive producer on these things has these days... so I don’t think it’s necessarily his doing.

Whoever’s fault it is, though, it’s all a good thing for the film and the way certain parts of the story are visually expressed by the “DNA” of the title creature are a great help in moving the story along too... and not just used as an “illustrative element”. I don’t want to explain that visual element too much, however, because I’m trying to keep this review pretty spoiler free.

One of the other things that keeps the film from ever slipping into the realm of the dull or the humdrum is the four or five notable performances in the film, especially those of the two sisters who really sell it right from the start. This is a real collaborative effort and a great outpouring of combined creative energy which covers all the production aspects of the film, including some great sound design and a nice little score I’ll need to keep an ear out for too.

It all makes for a film which will continue to play out in your mind for a day or two and that’s one thing I am grateful for. The other thing I’m equally grateful for is my inadvertent delay in writing this review because it let the film do its work in my head and I suddenly had a bit of an epiphany on the bus coming home tonight, because I’d let the film take possession of my soul and haunt me when I was least expecting it...

Essentially, there's a neat little twist towards the end of this movie and, normally, just my pre-knowledge of that fact (which I did have, actually) is enough to allow me to figure it out within the first 5 or 10 minutes of a film. This time, however, I hadn’t even perceived that there was a twist when I actually saw it... I just let the hypnotically beautiful visuals wash over me and missed it completely, I guess. There was something the director took time to carefully highlight a few times before the end of the film (aka visually bash me over the head with) but, unusually for me, I just didn’t pick up on it at all and, whereas that should have ensured I was even more surprised at the finale, all it meant was I just didn’t even perceive that there was anything more to the ending than what I saw on the surface.

In this particular instance, it was probably me just being stupid but all I will say to those of you who have not gone out to see this one yet, is that you should really watch those opening credits very closely... and if you do you will be rewarded. I’m now definitely picking up the blu-ray of this thing when it comes out because I want to watch it again and go in knowing what I know about the ending now... it will be a much more rewarding experience because of it, I suspect.

So there you go... mostly traditional ghost story but with a slight twist, well written, beautiful CGI on the “Mama ghost creature” who is a character in her own right, a cool dream/nightmare sequence (I didn’t mention this before but the Mama back story dream sequence is amazingly well presented), brilliant performances from the actors and actresses involved, a sexy rock chic (okay, so I might be a bit biased on that count) and some truly stunning visuals.

Oh... and it’s scary, which is something maybe a lot more modern horror movies should try to remember to be these days. If you’re a fan of ghostly apparitions with a beautiful, dark fantasy world element, then Mama is right up your street... and if you’re not careful she may just haunt you on a bus a few days later.