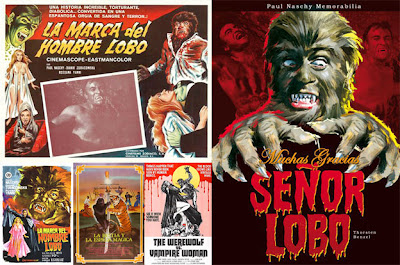 This marvellous tome was given to me by “a very good friend” recently for my birthday... because she knew just how much I wanted to read it. Now, while the book isn’t quite what I was expecting it to be, I was so struck by the design and beauty of this limited edition that I really wasn’t overly worried and, as it happens, this proved an absolutely amazing read, in addition to the heady experience of looking over the thousands of beautiful posters, lobby cards, locandinas and foto busta reproductions which make up 99% of the book. It really is one of the three or four most beautiful books I’ve ever owned... right up there with Tim Lucas’ All The Colours Of The Dark (his epic work on director Mario Bava... and I mean epic) and my Taschen book, The Pedro Almodovar Archives (reviewed here).

Now, when I first caught sight of this wonder on the internet, I was labouring under the false impresssion that this book, which has all the text in two languages (one of which is English), was concerned with talking about the films of Paul Naschy... who was perhaps most famous for his Waldemar Daninsky wolfman character which he played on and off for a number of decades. Well this is not strictly true, although, it certainly is one of the most valuable resources on the films of Paul Naschy there is (possibly the most indispensable actually). I don’t think you would find as fine a collection of posters and lobby cards etc as comprehensive as this printed anywhere else. However, the sharper eyed among you may have noticed the subtitle of the book is actually “Paul Naschy Memorabilia” and while the book features all these quite rare and opulent examples of various promotional materials on a film by film basis, it turns out that it is these artefacts from the films themselves, and not the actual films, that are the source of discussion here.

The book is put together by a private collector of Paul Naschy items and, while there is obviously some technical background on the origins of each movie, the main thrust of the information is all to do with the history of each movie as seen by it’s release patterns and paper trail, so to speak.

Curiously, the book only goes up to the 1987 Naschy movie El Aullido Del Diablo (aka Howl Of The Devil, reviewed here), which co-starred the extraordinary Caroline Munro... and then covers some of the other films in a short appendix which also has some amazing poster artwork in it (I ordered a cheap copy of Mystery On Monster Island on DVD after finishing this book because of that appendix). So what would be a typical chapter here would be some bumph about the movie, followed by the curiosities manifest in the different styles of advertising campaign materials in different countries - things like a company logo being printed on the bottom right of a poster identical to another except for the absence of that logo or the fact that one country’s run of lobby cards was printed on a slightly thicker stock but printed offset litho instead of some other process. Some of the most amusing differences from territory to territory are the way in which some countries censor nudity... some will allow it, others will put little stars over ladies’ nipples and yet another went to quite elaborate lengths to “pen and ink” ladies underwear onto some of the actresses. All very strange but interesting.

Now, I’m a graphic designer for print, so I naturally found most of this stuff really fascinating anyway, but the real icing on the cake, and the strength of this book, is that the writer is able to then show you all these things illustrated in full colour with a wonderful (old, decaying book) background which is printed under the text and pictures on every page, presumably chosen to give the photographs of this rare, archival material a bit of 'lift' off the page in contrast. It’s really wonderful stuff and, even if there had been no accompanying text with each section, it would still be one of the most essential purchases going... not just for longstanding fans of Paul Naschy, but for anyone interested in knowing the ins and outs of the way films are marketed in different areas.

This is, untypically, one of my shortest reviews, but that’s because I really have nothing bad to say about this particular volume. The myriad illustrations of brightly coloured movie advertising confections coupled with the sheer enthusiasm and passion of the writer, who has obviously spent many decades putting together this collection of rare and sometimes rescued items, are more than enough to ensure this is a book I shall return to for reference and, well, to just lose myself in the pictures, time and time again. If you are a fan of either Paul Naschy, horror films or movie advertising in particular, I urge you to snap up one of the last copies of this book before it passes you by. An absolutely thrilling work of reference which is an absolutely essential purchase for lovers of film.

And another big thank you to my “extra special friend” who got me the book in the first place.

For some of my Paul Naschy movie reviews, check these links below...

Fury Of The Wolfman
http://nuts4r2.blogspot.co.uk/2010/09/like-werewolf-scorned.html

The Beast And The Magic Sword
http://nuts4r2.blogspot.co.uk/2010/06/werewolf-vs-samurai.html