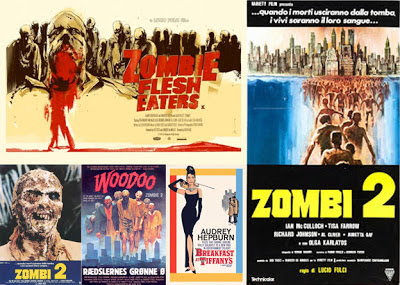 When I finally caught up with seeing Blake Edwards 1961 romantic comedy Breakfast At Tiffany’s a number of years ago, my first impression of the film was, “Wow! This is just like Zombie Flesh Eaters.” I’ll come back to that thought for you in a minute.

Lucio Fulci has always been a bit of a hit and miss director for me, although I have started coming around to his work more in recent years (this stuff was almost impossible to get uncut and in its correct aspect ratio before the dawn of the multiregion DVD) and I think some of his films, such as the giallo Lizard In A Woman’s Skin (reviewed here) are among the finest of the genre.

When I first saw Zombie Flesh Eaters, as it is quaintly and luridly known here in the UK, it was with the reputation of being a once banned video nasty which a lot of the kids at school had already seen on uncut pirate video in their very early teens. I caught up with it almost two decades later when it was shown on a cable channel but... it still had the notoriously censored “wooden splinter slowly penetrates eyeball” scene sliced out of it by our less than beloved censors. I’ve said this before, a long time ago, but I think it bears repeating here... the removal of what is ultimately a fairly cheesy technical and practical effect actually serves to render the scene a lot stronger because your imagination tends to fill in the blank and it takes on a certain power as a scene without it. Nevertheless, there’s no way I was going to be left having watched only a censored version of the movie so I immediately bought the American DVD edition which was uncut, and my appreciation for the movie grew over the years.

I’m now on my third home video print of the film, Arrow’s new Region Free Blu Ray edition, which my cousin got me in a nice “steelbook double disc” edition for Christmas. There is, ironically, a ‘seamless branching’ error on the first disc, containing the film, which means the initial purchase of this “uncut zombie classic” will actually be missing the first 6 seconds of the post-credits establishing shot. Luckily, Arrow have now come clean about this and there is an address where you can send the first disc back to them and they will, hopefully, send you a replacement disc when the second pressing is done (was still waiting for mine to come back when I started writing this review but, hey! It’s here now with 6 seconds fully restored).

Contrary to popular belief, this movie was not “initially” made to cash in on the Dario Argento cut of George Romero’s second zombie feature Dawn Of The Dead (also known as Zombi) in its Italian release. The script was already being well worked on and looked at before that film hit cinemas. However, the players in the Italian film industry are never ones to let the opportunity for a ride on a successful band wagon get away from them so Zombie Flesh Eaters was released after Romero’s film with the title, in Italy, of Zombi 2... in the hopes that people would think it was a sequel (the irony being, of course, that Dawn Of The Dead was already, in itself, a sequel to Romero’s groundbreaking Night Of The Living Dead). In the US I believe it was just released as Zombie and over here it ran afoul of the Video Nasties list when it was released to early home video as Zombie Flesh Eaters. A small case could be put forward, if one wanted to bother to try to tenuously link this movie to Romero’s film, that this movie “could” be seen as a prequel to Romero’s Dead films, since the movie closes with hordes of zombies invading New York over the Brooklyn Bridge (presumably stolen shots because I believe there was some trouble when Fulci’s production didn’t bother to get a license to shoot any footage in the US) but it’s a frail link at best and I don’t think Romero would approve of the mere idea of voodoo being the cause of the zombies in his movies.

So, getting back to my opening statement... looking at this film again after a good few years reminds me straight away why I feel that Fulci’s Zombie Flesh Eaters and Edwards’ Breakfast at Tiffany’s are like two peas in a pod. It’s all to do with the way the shots are framed and designed. Everything in this movie is composed around vertical lines which often serve to truncate the frame into sections for the placement of people and objects within a shot... and this is exactly what I remember the Blake Edwards film doing too. Fulci seems hell bent on finding vertical splitters for a good deal of the film, heck he’ll even split shots with highlighted “hero” palm trees in the jungle scenes, or ensure that the jeep which our heroes ride in has one of those two piece windscreens so that he can compose people in this fashion. Other times, when it’s just two people talking in a room, for example, he’ll use texture and colour change on the wallpaper behind them to artificially create this kind of blocked in space and patiently drop his actors into different sections. It’s a great triumph of cinematography (which is more than most pictures of this kind of subject matter might have gotten treated to in terms of design) but it also serves to give the film a certain sense of subconscious claustrophobia to it... as everyone seems to be closeted away in their own separate space.

The film has Tisa Farrow (Mia’s sister) and the lovely Auretta Gay but its two principle assets are the English actors Richard Johnson (yeah, the cool dude who played Bulldog Drummond in the sixties and who played a major role in the original Robet Wise version of The Haunting) and Ian McCulloch (who was in stuff like The Survivors and who went on to star in a couple of other Italian horror-exploitation movies including the ludicrous and eminently watchable Contagion). Johnson and McCulloch really lend credence to the plot and laughable dialogue in this movie by investing everything they have to say and do with a certain amount of conviction and weight.

Of course, one of the movie’s standout and most celebrated scenes starts off with Auretta Gay showing off a couple of her principle assets with her topless scuba dive routine (which is nice, I admit). This leads into an extraordinary scene where she comes face to face with a shark. Things get intense (and nice to look at) as she tries to evade the shark and goes to hide behind a bit or underwater coral... and then you get the ‘hand on the shoulder’ moment and she is in battle with... an underwater zombie. Yes! She manages to evade both the zombie and the shark to get back on her boat but this leaves us with a shark versus zombie scene, where the zombie bites the shark and comes out the clear winner. Yeah, that’s right. This film has a Zombie VS Shark scene. How can you not want to watch a film that has that? How cool is this?

The rest of the film after this scene is not an anti-climax as you’d think either, with two great gory set pieces being the famous house invasion/eye gouging scene and the ancient graveyard scene with the famous iconic ‘zombie with maggots in its eye’ that usually makes the cover of most releases of the film (recently referenced in the charming zombie remake of Romeo and Juliet, Warm Bodies, reviewed here). The sense of claustrophobia and intensity increases as the film goes on (aided by those fantastic shot designs) and the ending is pretty good too, with the film's two survivors (I’m not telling you which two) facing a less than certain future in their boat with a living dead friend threatening to batter his way up from below and nowhere for them to run to.

Zombie Flesh Eaters may seem, these days, to be a bit of a cliché in terms of genre classics to keep an eye out for (quite literally), but it still packs a wallop and though I’d have liked to have seen the Ian McCulloch commentary track from the old Anchor Bay release making the cut on the new Blu Ray edition (or at least a new commentary track, maybe), Arrow have done a good job with this release (seamless branching error aside) and some of the extras on here, while still being repetitive in terms of what has come from various releases in the past, are well worth your time... as are the little, cute animations this company likes to create for some of the featurettes on their titles. If you’ve not seen this movie before and, especially, if you’re a native of the UK and haven’t seen it uncut before, now’s your chance to catch it in as good an edition as your likely to get... just remember to check the opening, pre-credits shot out and send it back if you’ve got one of the discs with an error on it.
Posted by NUTS4R2 at 20:26