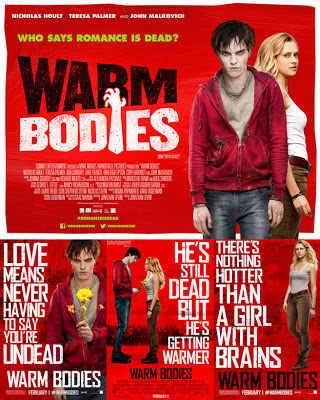 You know, I saw absolutely no publicity on this film at all until a couple of days before it started playing at my local cinema, courtesy of same cinema’s i-phone app, and even then it was just because I was checking to see what time another movie was going to be playing. And this is why great movies like this one here are doomed to smaller box office (and often don’t get a general theatrical release at all) while the Batmans and X-Mens of this world grab all the screen time.

Warm Bodies is a new zombie film which, like almost all modern zombie films, takes its basic plot logic from George A. Romero’s revitalisation of the genre in his 1968 film Night Of The Living Dead. With this movie though, it’s more like Nights Of The Loving Dead as this is basically a remake of Shakespeare’s Romeo and Juliette, but relocated to a zombie setting. I didn’t know this when I went to see the movie but if you haven’t figured it out by the time you get to the balcony scene then you might as well hear it from me.

And I have to say, it works really well.

The movie is mostly told from the viewpoint of “R”, a sluggish zombie whose inner dialogue as he shuffles about his daily routine helps set up the audience by running through all the usual Romero zombie ground rules while at the same time introducing a new sub-section of zombies, the “boneys” who are pretty much so far gone in terms of decay, that they are, for all intents and purposes, walking skeletons. Even though R complains about the slow shuffling of his daily routine, the writer/director does try to have his cake and eat it on this one, as there are also a load of really fast, running zombies, including the boneys, who kind of fly in the face of the cinematic convention we’re lead to believe this film is being informed by and, although there are good reasons for this as a biological progression as the movie runs its course, the phenomenon seems to be too bedded in even near the start of the movie for it to make much sense within the genre conventions set up in the opening sequences.

That being said, that’s about the only criticism I have of this movie. It’s a neat little love story and when R falls in love with a human “hunter/gatherer”, Julie, after eating her boyfriend, he smuggles her back to his airplane home at an airport and looks after her, gathering food for her and romancing her with his collection of vinyl records, which he prefers to downloads and CDs. There’s also a nice little gag when Julie holds up the cover of a DVD edition of Lucio Fulci’s Zombi (aka Zombi 2 and Zombie Flesh Eaters, reviewed on this blog soon, in its new blu ray edition) and compares the maggot infested features of the “iconic” zombie from that film with those of the relatively normal looking “R”. And there’s even a major plot point which takes the Dan O’ Bannon scripted spoof Return Of The Living Dead as its “rulebook source” (in fact, wasn’t one of the sequels to that, which I’ve not seen. also a version of Romeo And Juliet?). That last presumably comes from the original novel on which this film is based, which I haven't read myself, as yet.

I don’t want to spoil too much of this movie but when Julie returns back to her community of surviving humans, lead by her father (played by John Malkovich), she is unaware that the act of "R" and her "bonding" has brought a carthartic reaction among the less far gone of the zombies, including "R" himself, which has kickstarted their hearts and started a self healing process as the undead in question slowly start turning back into something like humans again. Love, it seems, really is the drug, at least when it comes to discovering a cure for the undead. Of course, all this means that the boneys are now also hunting zombies (they key off of heartbeats) and pretty soon two zombie factions, the boneys and the walking dead but getting less deader, are converging at the walls of the last surviving refuge of humans and "R" and Julie find themselves stuck between a rock and a hard place.... or at least "R" finds himself stuck between a bullet in the brain from John Malkovich and being eaten by boneys.

I didn’t know this is the same writer/director who made a brilliant (against all the odds, considering the genre) slasher movie about seven years ago called All The Boys Love Mandy Lane (reviewed here) and I have to say he’s definitely one to watch out for. Again, the tragic ending of Shakespeare’s original is played out here but I’m not actually spoiling anything for you here because, even if you’ve figured out that the rules of the zombie genre can somehow change how that ending can work, there’s a bit more surprise about how the filmmakers go about doing this than I expected and, since the obvious template is never in question, I think it’s fair to say I’m really not giving much away here.

This zombie film is bright, original (well okay, maybe not original but certainly well thought through and realised), has absolutely brilliant performances from all involved and is, ultimately, quite heart warming. It even managed to jump-scare me a couple of times, which is no mean feat for a zombie movie, which is a genre more about body count fodder than genuine scares, for the most part. I can only recommend this film to anyone and it’s not just zombie fans who will take something away from this... fans of romantic movies for lovers should have no real problems with this movie and I found it an absolute joy. If you want a movie to see on Valentine’s Day this year, and you don’t mind a bit of blood and gore mixed in with your romance, then this is definitely the movie to go and see on February 14th. Definitely a DVD purchase when this gets a release.

It also makes me wonder when we’ll see a seventh George A. Romero movie hit the cinema as it’s certainly a shot in the arm for the genre and deserves no small measure of success and influence on the money holders' collective purse strings. Wherefore art thou Romero?