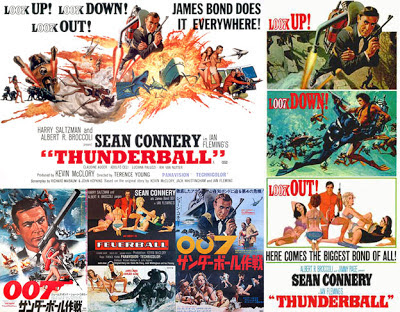 He’s tall... and he’s dark,
And like a shark,
He looks for trouble.
That’s why the zero’s double,
Mr. Kiss Kiss Bang Bang.

And those, as you may or may not know, are the first lines in the song Mr. Kiss Kiss Bang Bang, one of the greatest and most powerful Bond songs ever written... and it was originally supposed to be the opening title song to Thunderball. But I’ll get to the music later.

Thunderball is the fourth Bond film and the third and final film in the series for director Terence Young, who practically reinvented the Bond character for the big screen and helped Sean Connery pull it off in the first two movies which he directed in the sequence, Dr. No and From Russia With Love. It has some interesting little things to look out for but, again, before I go into that, let me give you just a taste of the film’s checkered history.

Thunderball was developed as a script by Ian Fleming to be the first James Bond film. A collaboration which included writing components from his various producing partners, two of whom were also rights holders and caused a lot of trouble for EON on a number  of occasions in the courtroom. The two more famous collaborators, Kevin McLory and Jack Whittingham, are even given collaborating credits in the title page within the novel that Ian Fleming turned his screenplay adventure into once the movie obviously wasn’t going to happen. EON wanted to make this their first film but had trouble getting the rights from McLory and co, at the time... so they made Dr. No instead. Ian Fleming’s novel was then published in 1961 and the movie version of Dr. No came out in 1962.

By the time EON wanted another crack at Thunderball, McLory and the gang joined forces for producing the movie... which was now after Fleming’s untimely death, sometime during the production of Goldfinger. However, Fleming had granted rights for McLory to make films based on the characters and ideas in this book, and that’s exactly what he did in the early 1980s with the Sean Connery Bond vehicle Never Say Never Again... which is pretty much a remake of Thunderball... although it also included characters from early drafts of the script which didn’t make it into the final screenplay from the 1965 movie. There were various court battles over the years and the last one over the rights means that EON now has soul ownership of all the Bond movies ever made (including the 1967 version of Casino Royale and, I suspect, the 1950s TV version too). I think similar legal proceedings were happening a long time before this and were the cause of delays in shooting another Bond movie after License To Kill, and which unfortunately cut short Timothy Dalton’s brief but effective turn as Bond.

The Thunderball movie from 1965 is a, mostly, simplistic but (again, mostly) effective Bond movie. I say mostly because the plot idea is over with fairly quickly and everything from then on becomes a “hunt” for missing atomic bombs (the Thunderball’s of the title, presumably). It’s also a bit draggy in places because a lot of the action takes place under water and, frankly, there’s a lot of time wasted due to various underwater establishing shots slowing down the pace of the piece... contextually, though, I’m guessing this was more of a novelty back in 1965 and you certainly didn’t hear me complaining when I saw it as part of a Bond double bill at the cinema around about 1973/74 when I was 5 or 6 years old. I absolutely loved it and that underwater battle stayed with me forever.

So, yeah, now I look back on it... a bit leaden in places but still a solid Bond entry with quite a few items of note in it...

Okay... so this was the first Bond film to be shot in a long, thin 2.35:1 aspect ratio (probably Cinemascope or Panavision... but that kind of ratio anyway). The aspect ratio would change over the films from one kind of size to another, but this marks the first time that the compositions of a frame in a Bond movie could be played about with in this specific shape. This also gave the films producers an excuse (if they really thought they needed one) to rectify something they maybe should have done at the beginning of the series. By which I mean...

The opening gun barrel sequence had to be re-shot to accommodate the new aspect ratio that Terence Young was shooting in. So instead of seeing stuntman Bob Simmons walk on and shoot into the camera, like you do in Dr. No, From Russia With Love and Goldfinger, you actually see Sean Connery perform gun-barrel duties for the first time in the films... and he does it quite differently. Down almost on one knee if I recall correctly?

The pre-credits sequence opens with another in a line of little gags where the producers try to alarm you into thinking Bond is dead, a theme which had started in director Young’s previous Bond movie From Russia With Love. This one focuses on the JB initials on a coffin at a funeral, before Bond and the woman he’s working with fill the audience in on the fact that it’s not Bond’s funeral. These pre-credits are also of note because it’s the last time you will see the famous Aston Martin DB5 from Goldfinger actually showing off some of it’s gadgetry in a working environment (although it had kind of a cameo, sans gadgets, in Goldeneye) until you get to last year’s Skyfall... which finally got the Aston Martin out as more than just a tool for visually ticking a check box and turned it into an important Bond prop again for a small, nostalgic section of that movie. After Bond’s daring escape by jet pack (which is actually not a special effect in the long shots you see and which was actually flown on that day by, I think, the inventor of the machine) we get to see the famous bullet-proof back windshield, made famous by then from the Corgi toy, and some water squirters which help Bond and his girl (an actress who returned as one of the card players in the Daniel Craig version of Casino Royale decades later) escape SPECTRE’s operatives before going into the Tom Jones performed title song. Johnny Cash sent his own Thunderball song to the producers in an attempt to secure him the honours but it was rejected, although I believe it finally turned up for public consumption on YouTube a couple of years ago.

It’s also, hands down, got the most gorgeous Bond girls in any of the Bond films (excepting the astonishing Caroline Munro in The Spy Who Loved Me, obviously), including a more significant role for Martine Beswick, one of the girls featured in the gypsy wrestling scene in From Russia With Love.

There seem to be various versions of the prints of the movie too, with different bits of scoring and different lines of dialogue and takes used, depending on which version you see. It’s also one of the Bonds which is the most heavily cut on TV... the torture scene I remembered as a kid, seeing it at the cinema, was always eradicated completely on television and for years I thought I’d just made that scene up in my head until I got to see it again on various home video releases. On some prints the next Bond movie mentioned on the end titles is On Her Majesty’s Secret Service... although the producers changed their mind and made You Only Live Twice as the next one instead.

All in all it’s not a bad film... with my main problem being the contrast of fast, tightly edited scenes juxtaposed with shots of the ocean which are just plain boring.

The score, however, is wonderful but...

He’s suave, and he’s smooth,
And he can soothe,
You like vanilla.
The gentleman’s a killer,
Mr. Kiss Kiss Bang Bang.

Another verse from one of the great Bond songs, Mr. Kiss Kiss Bang Bang, and Dionne Warwick’s original recording, which is great, does synch perfectly with the opening credits for which it was written once again, by the winning team of Barry and Bricusse. They didn’t think Thunderball would mean anything for a song lyric and the producers agreed and then this title song was recorded. Then United Artists said the song must have the film’s title in it so they could get recognition on the radio, so Barry then turned to Don Black for a new title song which was performed by Tom Jones... which, to be fair, is also a powerful, killer ballad worthy of many a Bond film... it’s just not as good as the original song (something similar happened with David Arnold’s Tomorrow Never Dies, performed by K. D Lang, which had to be retitled Surrender and placed on the end credits of that film when Sheryl Crow recorded her song for it... Sheryl’s song is great, until you hear the original, which is just a powerhouse of perfection).

But the thing is... most of the score, and it’s a brilliant score, that Barry wrote for Thunderball is based on variations of Mr. Kiss Kiss Bang Bang... so Shirley Bassey was then called in to sing a shorter version of Mr. Kiss Kiss Bang Bang for the end credits of Thunderball... and that wasn’t used either. So Barry wrote a few Thunderball variations and plugged those into the score in a few places, so the Tom Jones song wouldn’t feel tagged on at the last minute (which it was) and the result is a powerful score... based mainly on the tune to Mr. Kiss Kiss Bang Bang (and again, David Arnold’s powerful score for Tomorrow Never Dies is all based on the melody from the song which ended up being retitled to Surrender). There’s some lovely, slow stuff for harps and vibraphone in this score too, to musically enhance the feeling of being underwater.

And that’s about all I’ve got to say on this one... some great and brutal (more brutal then you get to see on TV) underwater action sequences, truly beautiful women, kick ass music and the usual Bond humour all come together in this superbly acted, brilliantly designed and, occasionally, draggy Bond movie. Not one to miss, though, that’s for sure.

Dr. No
From Russia With Love
Goldfinger
Thunderball
You Only Live Twice
On Her Majesty’s Secret Service
Diamonds Are Forever
Live And Let Die
The Man With The Golden Gun
The Spy Who Loved Me
Moonraker
For Your Eyes Only
Octopussy
A View To A Kill
The LIving Daylights
Licence To Kill
GoldenEye
Tomorrow Never Dies
The World Is Not Enough
Die Another Day
Casino Royale
Quantum Of Solace
Skyfall
S.P.E.C.T.R.E
Posted by NUTS4R2 at 20:00