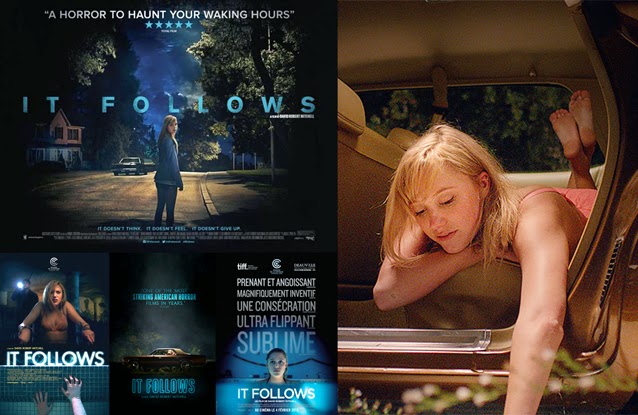 Okay then. What we have here is a movie which has been warmly welcomed by afficionados of the horror genre, from its tour of various one off and preview screenings on the festival circuit and the usual venues this kind of movie rears its head at before getting a general release or distribution deal... and it deserves its warm welcome in spades. It’s also been called fresh and original and, there, I think, I’d have to disagree although I will say that, while anything but original, I don’t think it’s supposed to be. I’m sure the writer/director would be the first to point out the postmodernistic references he’s wearing so warmly on his fear tinted sleeve but, even though this film takes no prizes for new ideas... it does do what it aims to do extremely well and, frankly, with a lot of affection towards the genres and styles it’s eclectically gathering together in its warm, parodic embrace.

So lets unmask a little of its historical legacy here and say that, like the title of this review suggests, this is yet another version of the old “pass the curse on” story popularised by writer M. R. James in his short story Casting The Runes. Of course, there have been numerous versions of this story at the cinema and on TV over the years and my readers will probably best remember both the ones that were freely adapted from this tale such as Night Of The Demon (aka Curse Of The Demon 1957 - reviewed here), Casting The Runes (1979 - reviewed here) and probably the modern variants which were, like this one, using the story as a starting point such as Ringu (aka Ring 1998) or just not being very open about their sources, such as the excellent Drag Me To Hell (2009 and with a mini review here).

The basic plot of the original story is that a man puts a curse on a man who will be escorted from this mortal coil by a demon unless he lifts the curse by passing it back somehow within a certain amount of time. In the Japanese movie Ringu (loosely based on Koji Suzuki’s novel, which still very much owes a debt to M. R. James' original short) the curse takes the form of a virus caught by watching a cursed video tape and the way you pass the curse on to another is to copy the movie (thus perpetrating the act of widening the scope of the virus) and then showing that duplicate to another person. In It Follows, writer/director David Robert Mitchell strips out the elaborate ‘cure all’ concept and complications behind said solution that Ringu added to the mix and boils it down to this: you have to have sex with someone to pass the curse on to them. If that person then dies, the demon, if that’s what IT is in It Follows, will then kill the next person back up the line and follow the chain back... so if you are a victim you have to not only pass it on, but convince the next person to pass it on and so on.

Another thing that Mitchell cleverly does here is not bother to explain or enlighten as to the origins of the shape-shifting, relentless and ultimately unstoppable demon in this story. And, similarly, the teenage characters in this one refreshingly make no attempt to try and trace back the history of the curse and to stop it in its tracks. Which is actually fine because, as amply demonstrated with this very smart and self aware genre movie, modern audiences really don’t need to know the origins of a character in a story to be able to reap the benefits of the way that character - hero, villain or thing - interacts with the immediate environment... as long as it does interact in the most entertaining way possible. They just need to know what the rules of engagement are, so to speak, and just leave it at that. Which is something, I have to say, that the makers of various superhero and comic book movie adaptations in the last decade or two still haven’t managed to cotton onto yet... although it’s something horror movie makers have known for quite some time (you’d think they’d share the secret with the comic book people at some point, no?). In this film, the teenage protagonists are going for the short route... lure the thing in and then try kill it. Whether they have any measure of success at that is something I will certainly not spoil for you here.

Now It Follows, it has to be said, gets a lot of things right in its all too brief running time and I’d have to say, in terms of the genre, it’s just about a near perfect example of this kind of movie that you’re likely to get. I think this one is going to be talked about by people and written about in academic studies on sex, gender politics and horror movies, for decades to come... and I’m happy to say that one of the things that the film absolutely gets right is the teenage characters. I’m 47 years old and I have to say, the teenagers in this movie weren’t in any way scripted to annoy the buggery out of me (like a good deal of teenage horror movies are these days... just compare this to the awful Ouija - reviewed here) and I found that I could actually identify with them. Now, part of that may be because the characters aren’t fleshed out to any great detail but the dialogue seems fairly adult and the various actors and actresses cast in the roles, especially the main, cursed protagonist Jay, played very low key and convincingly by Maika Monroe, all knock it out of the park in terms of their performances. This is a smart movie populated by smart actresses and actors, so this is all very good.

The other great thing it’s got going for it is a sense of reverence and respect for the good old mid-1970s to mid-1980s teenage horror flick, and you see it in every frame of the film. Now, I didn’t like a lot of the American horror flicks from around that time (most people my age would have first caught them on dodgy VHS tapes rented out from the local off-licence) but this has a lot in common with the best of them and it seems like the whole movie has been shot through some kind of special lens which gives it a sort of built-in filtered nostalgia for people my age. And I really appreciated that.

It’s not afraid to be silent and reflective, for example. There are lots of quiet patches in this movie where people are just looking or, more often than not, the camera is making voyeuristic passes at the surrounding scenery while the characters are doing their thing off screen. This is epitomised in a shot where two of the main characters go to find out the true identity of the man who passed the curse on to Jay. The two go into an office reception area at a university but the camera stops following them before they reach their destination and, instead, starts doing slow, 360 degree pans around the general vicinity... which is the kind of thing you would probably get a lot more of in European cinema than standard US film-making, at least contemporary US film-making, it seems to me. Of course, what the director is also doing is building tension and milking the suspense by constantly checking out the periphery of the characters... once the audience knows to look out for something, never the same figure twice, the director can start playing with the voyeuristic angle and start creeping out the audience by showing things happening in the background to raise the hairs on the back of the neck before the creature actually, legitimately, arrives... which is what all good horror movies do to a certain extent, of course.

The other thing that helps considerably in this movie is the soundtrack by a group called Disasterpeace, which is also very much feeding off a late 1970s American horror movie vibe. If you think back to scores like Phantasm and, more pointedly, John Carpenter’s great scores to Halloween and The Fog, where rhythms and jarring, jangling effects on repeat mode resembling Bernard Herrmann’s famous Psycho musical stings on acid would key in and inform the ears and heartbeats of the audience, elevating the suspense and fear factor up to eleven, then you’ll get an idea of what this score is like. It’s not just modern, horror movie sound design embracing dissonance. In some sequences it’s quite melodic and its definitely “the real deal” as far as this humble audience member is concerned. And, again to the director’s credit, he doesn’t bury the score in the mix like most modern directors do with their product... he knows exactly what his composers and musicians have delivered to him here and he lets it breathe... pushing it right into the foreground and floating it above the sound effects for a lot of the movie. Such a shame, then, that you can only currently purchase the score digitally as I would really like to get a proper CD soundtrack of this one... it’s a really great score.

And it’s a really great movie.

Horror afficionados of a certain age should get a lot out of this film. Sure it’s filled with clichés but what modern horror movie isn’t... in fact, those kind of key moments are absolutely essential, a lot of the time, to making a genre piece like this work and Mitchell certainly seems to recognise this. The point being, that the rules and tropes of the horror movie are executed absolutely perfectly in this one... so younger audiences should get a good hit off of this movie too. And, of course, since we still know nothing about the creature who is pursing the human chain of sexual encounters, we still have the possibility of sequels sharing that mythology and expanding on it in future versions of a franchise... so that should keep the Hollywood bean counters happy on this one and I wouldn’t be surprised if I am writing the review up on here for the sequel in a couple of years’ time. Either way, this one’s a bit of a masterpiece and I urge anyone who likes a decent horror movie, especially those who have a certain affection for the stylistic leanings of 1970s movies, to give It Follows a look soon. I doubt you’ll regret it.