Battle For The Planet Of The Apes 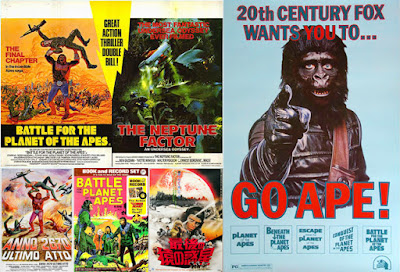 Gorillas In Their Midst

Battle For The Planet Of The Apes
USA 1973
Directed by J. Lee Thompson
20TH Century Fox
Blu Ray Zone B

Warning: Slight spoilers but, with this particular movie, you might not really worry about that.

Wow, this is a terrible movie. The swan song of the original Apes movies (although it was followed by two TV different shows - one live action and one cartoon), it’s such a shame that the same director who turned in such a wonderful job on the previous film, Conquest Of The Planet Of The Apes (reviewed here), followed it up with such a hollow shell of a movie.  To be fair to Thompson, from what I understand, he was forced to sign on as director before the script of this one was completed... maybe if he’d had seen how the final thing read before he signed then, who knows, he may not have decided to return to the franchise.

This film is the one I mentioned in my review of the first movie in the series here. I saw it at a very young age on a double bill with a movie called The Neptune Factor and, frankly, as a kid it somehow left an impression. At least the one specific scene where all the apes appear dead before Caeser yells “Fight like Apes!” and they all miraculously stand up and kill all the human mutants did... but it wasn’t more than a decade, I think, before I saw it again on television and realised just how bad this one is in comparison with the other films in the series... it even makes Beneath The Planet Of The Apes (reviewed here) look kinda good. I was hoping to see a little more in it this time around, watching the new Blu Ray set but... no... this film is just as dreadful as it always was, I’m afraid.

It starts off a bit hopeful in terms of the “have the studio wised up to their previous continuity errors” factor with a prologue, the first of two bookend scenes, set in the very far future... a bookend scene featuring John Huston as The Lawgiver, a character referred to by Dr. Zaius and others in previous movies. He then starts telling the story of the events of this film and the movie makers wisely don’t put a specific time on the things that take place in the main body of the story. That could have worked, too, if it wasn’t for the fact that Caeser and Lisa, played once again by Roddy McDowell and Natalie Trundy, don’t really seemed to have aged much.

The film, it can be deduced, is set about 12 years after the events of the previous film and, in the interim, we have a post-war Earth where the apes and humans are living, relatively, peacefully together. However, this must make Austin Stoker, playing the brother of Mcdonald in the previous film (the original actor refused to return for this movie and, really, who can blame him?), a very young kid brother to the original character and so, when he and another new character, a smart Orangutan called Virgil, agree to accompany Caeser to the old, bombed out and irradiated city where the ‘other’ McDonald worked in the last film, it makes you wonder how Stoker’s character knows his way around the facilities so well.

As it happens, the journey to find tapes of Caeser’s mother and father is just a plot device to alert the radiation mutated humans living beneath the city to the presence of the apes and humans... so they can mount an army against them. It’s not specifically said but it’s definitely implied (and verified with a ‘lost scene’ involving the origins of the worship of a nuclear bomb) that these people are the ancestors of the future mutant race we learned about in Beneath The Planet Of The Apes. Also, during this scene, the audio tapes of Caeser’s explanation about the rise of the apes, that really dreadful one that made no sense in the otherwise fantastic Escape From The Planet Of The Apes (reviewed here), is severely and conveniently edited to omit the contradictions raised by Conquest Of The Planet Of The Apes... although the producers still seem to have forgotten that even this new, truncated version also massively contradicts everything we know of the future ape culture we learn of in the very first movie. So it’s pretty bad news whichever way you look at it.

In this film we have two villains... the human mutant villain who leads an attack on the village of the apes and also the gorilla, Aldo, played by veteran actor Claude Akins. We have a whole subplot where Aldo tries to enslave and, if he had his way, kill all the humans living with the apes and he also kills Caeser and Lisa’s son Cornelius, named after Caeser’s father who was also played by McDowell in the franchise. Everybody has a big fight with the mutants and then there’s a another fight between Caeser and Aldo and then... that’s all folks. We jump to the epilogue bookend where human and ape children in the far, far future are being taught side by side... showing that the events in the last few films have split the timeline off into a different set of future events. Yeah, whatever. I’m less than impressed by this one. You can tell, can’t you?

The thing which disappoints so much with Battle For The Planet Of The Apes is not the fact that the violence was deliberately toned down to nothing so kids could see it... I’ve got absolutely no problem with that if it’s appropriate to the story. It’s not even the fact that the producers were already eyeing the demise of the film series to make way for a dumbed down TV show of the franchise. My real problem is that it already feels like it could be an episode of that show. It’s like a shoot ‘em up, cowboys and indians movie with the apes and humans as two factions of cowboys teaming up against the invading indians as represented by the mutants. There’s nothing truly remarkable or notable in this film that makes it stand out in any way, like every other ape film previous to this one did (even the second one with that quite harsh ending). It all feels so run of the mill and even on a visual level, bearing in mind it has the same director to the previous entry, it lacks a lot and scenes end and transition like they are just stopping and starting around advertising breaks... it’s a bit of a mess. The only time the visual element of the film becomes interesting is in the brief interlude in the bombed out city when Caeser, McDonald and Virgil are being chased by mutants in long, sewer-like tunnels... but it’s just an interlude to throw in a plot element and it doesn’t stay this interesting for very long.

Just to add insult to injury, we have the return of Leonard Rosenman on the score and it’s not in any way resembling what you would normally get, in terms of orchestration, in a Planet Of The Apes movie... it’s just a bit, in modern parlance... meh. Except of course for when Rosenman keeps repeating those blasted tone pyramids at regular intervals... then it just gets really irritating (for more info on my response to Rosenman’s technical bag of tricks, read my review of The Car here). It’s just not, in any way, an interesting or striking movie and, given the mostly high standards and twisty plots of the previous four entries in the series... well it’s just not a fitting end to the original apes series, as far as I’m concerned. And unforgiveably again, for an apes movie, it also has a pretty weak ending. This one’s nothing to write home about and leaves a bitter taste in the mouth, it has to be said. See this one at your peril.