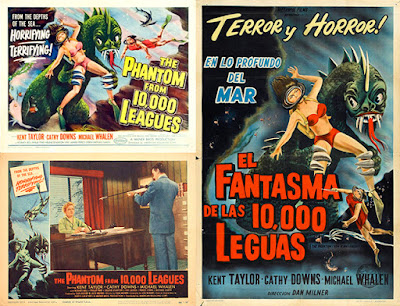 Warning: This has spoilers I guess but... it's not that kind of movie.

I’m sure my regular readers all know that I enjoy a pretty bad B-movie as much as any A list picture... so I felt pretty sure I was going to have some fun with this one. Well, maybe I did a little but, I think I’d have to stress that in terms of letters of the alphabet denoting the quality of a movie (something which isn’t strictly true of B movies at all, in fact) then I’d have to say that The Phantom From 10,000 Leagues is pretty much a Z movie.

The first big mistake of the film is to have a guy rowing out to sea and diving below the surface. We know we are definitely in an underwater part of the movie at this point as composer Ronald Stein’s music suddenly goes into the old Hollywood cliché of using harps on the score as soon as our quick to be dead diver penetrates the surface... which isn’t a bad thing actually. It’s a musical crutch that a lot of famous film composers have deferred to over the years. However, rather than hold back on what shape or form our terrifying monster will take, director Milner hits us with a sighting straight away... and it looks just terrible.

Seriously people. Any credibility the film might have retained past the first couple of minutes is immediately harpooned in the foot as the monster appears and wrestles with his human opponent. You remember those little old rubber finger-topper puppets of monster’s heads with the popping eyes and arms which would wiggle up and down when you moved your finger? This thing looks just like that but with absolutely zero flexibility (it just a rigid mess) and it looks like a giant version of one of those puppets has been plonked on top of a hastily “monsterised” diving suit and, yes, sometimes you can see the arms of the guy in the suit as he grabs people in his vicinity. This is the worst, sorriest excuse for a monster I’ve yet seen in a movie of this nature and, believe me, I’ve seen some real humdingers in my time.

So anyway, the guy washes face-down on the shore and we come across several people who discover his corpse, one after the other, including Professor King played by Michael Whalen and a less than enthusiastic... or even interested in much of anything throughout the film by the looks of him... government agent called William, played by Rodney Bell. Also our main male protagonist Dr. Ted Stevens, played by Kent Taylor, aided and abetted by an astonishing 1950s B-movie widows peak style hair cut makes his appearance here. We take Taylor’s word that both this corpse, and others found later face-down in more or less the same spot, have bad radiation burns to them. Hmmm... couldn’t see any evidence of that myself but, well, all I can say is it’s lucky they all were dumped face down so the make-up department didn’t have to spend time and money on the unusually specific, front sided burns these victims of the undersea beast were left with.

Actually, this first, post death sequence is all very interesting because, although all the acting in this sequence and pretty much all the movie for that matter, is the epitome of the term wooden, there is potentially a certain slow burn atmosphere in this sequence, as it plays out at a very leisurely pace. Unfortunately, of course, that atmosphere is completely killed before it’s even begun by having an opening scene which revealed that the monster is not a thing of terror, best left to man’s darkest nightmares but, instead... an abominably cobbled together, soulless puppet that looks about as threatening as a packet of chewing gum. So they kinda lost me on atmosphere before they even got to it on this one, I’m afraid.

Actually, the slowness of the pacing, which can work quite well in horror films which don’t have monsters that resemble something made out of papier mache with a guy in it as their main fear factor, is something which is kept going throughout most of the movie. There’s no real drama in this film... just very slow walking from one scene to the next with not much thought to bothering to say the lines in a way that would make them sound even vaguely interesting. For example... the professor studies a tortoise on the beach for a while... then we see a bad guy who’s spying on him for money, George, intently watching the Professor studying his tortoise from the safety of some handy, beach side plant growth. This goes on for a while.

So not much happens in terms of stimulating the audience’s mind except for, maybe, putting George’s contact to a foreign power Wanda, played by Helene Stanton in a bathing suit at one point and the delivery of some truly awful lines in the script such as Professor King, who is responsible for the whole underwater creature malarkey in the first place, talking about his secretary Ethel in such terms as... “A sneaking, prying female.” Yep, he’s not holding back at all when it comes to Ethel in this story. They even have his daughter Lois, played by Cathy Downs, use the old “would you mind helping me with this zipper” routine when it comes time to further establish that she is the romantic interest to Kent Taylors oceanographer here. We know he’s a red hot scientist because his famous scientific text books are quoted by one of the other characters... “Biological Effects Of Radiation On Marine Life” and “Nature’s Own Death Ray”. Yep, they sure sound like text books that would be on the reading list of any proud student of science if you ask me.

Yes. The writers have really gone to town in this one, cleverly enhancing the psychological depths of their characters by giving them lines that underpin their subtle affection of each other... like bad guy George’s appreciation of ex-girlfriend and link to the mysterious foreign powers who yank his chain, Wanda. "I didn't know then that they could put beauty and poison so cleverly together  into one package." he says, and we believe him. The writers also are good at establishing the motivations of their characters and filling in their background with subtle, poetic words like Professor King’s aside to his daughter... “You know, science is a devouring mistress. She devours all who seek to fathom her mysteries." Yes... I think we get the picture.

With all these terrible lines flying around, it’s easy to miss that the plot of the film really revolves around an underwater shaft of plutonium powered light which foreign powers want as a weapon and with the titular monster being, somehow, a kind of guardian of that strange and, frankly, incredulously vague phenomenon. Things get out of hand when Kent is revealed as being on a secret government mission, independent of the less than wildly enthusiastic William’s own sluggish investigation of the case, instigated by stories of a “phantom killer” roaming the area. As opposed to stories of a pop eyed, rigid, unthreatening puppet roaming the area, I guess. The two join forces and after being almost poisoned when bad guy George puts pills in their diving equipment... pills that don’t even dissolve and which can be quickly retrieved from the breathing tubes (no don’t ask me, I honestly don’t think any research went into the writing of this movie at all)... our two intrepid and mostly lethargic heroes go look for the monster themselves, narrowly escaping the man in the monster suit’s naked arms poking out of the costume as he tries to... I dunno... “huddle” William to death, somehow.

Meanwhile, bad guy George kills Professor King’s busy body secretary, shooting her from his hiding place in the bushes with his harpoon gun. She runs straight down the beach to the camera, does a kind of surprised exclamation of swiftly striking death... which is about a believable as telling a dog to roll over... and reveals the harpoon sticking squarely out of her back, as though shot from behind... where the empty beach is. What? This makes no sense at all. George is lurking in the bushes somewhere way over to her right, shoots her and, from that angle of trajectory, she gets a harpoon squarely in the back? C’mon guys. With sight lines like these, maybe the filmmakers should have been called in on the investigation of the John F. Kennedy assassination because... this stuff makes no sense whatsoever.

And then we have the end of the film where Professor King destroys what he’s has created and then, because he is busy wrestling with The Phantom From 10,000 Leagues, accidentally blows himself up with his time bomb, as well as the creature and, presumably, the shaft of unspecified plutonium light which destroyed an entire ship a little while earlier, just because it sailed over it. His daughter is naturally upset... well, a bit upset, I think... it’s kinda hard to tell. She looks a bit sad, I guess, but she has the arms of the dashing Ted to fall back in, with his widows peak and scientific know how... presumably the man who unwittingly hastened the death of Lois’ father in the first place, with his pondering looks, inquisitive nature and that ostentatious hairstyle that really ought to have had a cast credit of its own.

And that’s about it.

Ronald Stein’s musical score is sparse and, for this kind of movie, extremely subtle. A stand alone release was issued commercially for a week or two, before it was withdrawn due to legal issues, on the 5 disc set of 11 Stein Soundtracks called Mad, Mod and Macabre... which I will happily recommend to anyone who is able to obtain a copy. There are some interesting scores on that one and, in the case of this film at least, they are certainly better as a stand alone listen than having to endure this tosh for repeat watchings. I would recommend The Phantom From 10,000 Leagues to only those who have seen all “the good” B-movies and are running dry of black and white monster movies to watch... and only then if you have a lot of movie stamina. Mostly a dull affair which delivers gold if you are one of those people who can be appreciative of the levels of incompetency and unintentional comedy to be found in films of this ilk. There are a lot of better ones out there which can tick the same boxes and be a much more fun watch, however.