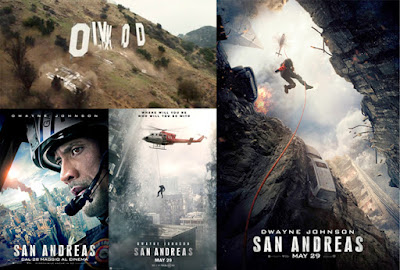 I’m sure I probably mentioned this before, last year, in my review of Into The Storm (reviewed here) but I’m not much of a person for disaster movies. I saw some of the John Williams scored classics when I was a kid... such as Earthquake, The Poseidon Adventure and The Towering Inferno (the building of which features in a scene in the film I’m reviewing here now)... and so I am trying to see more of these things because the specific kind of mass destruction which isn’t instigated by hordes of invading alien armies is something I’ve never really paid much attention to in the cinematic landscape.

I was in two minds whether to go and see this movie or not but the reviews saying this was the dumbest thing on screens in a long time kinda sealed the deal for me... I was hoping for, at the very least, an entertaining review. And I have to say that, surprising me in the process, I actually had a better time at the movies with San Andreas than I had the night before when I saw Jurassic World (reviewed here). Sure the science is completely buggered up (as it is with the dinosaur films, obviously) and it’s full of characters doing insanely stupid things (just like that dino movie) but I guess, even though it’s a festival of disaster movie clichés stuck together with some pretty blatantly silly and familiar script points to give it some kind of story arc, I was just expecting a lot less of this film than I was of the higher concept Jurassic Park sequel... so without my expectations raised above a point any higher than hilariously bad, I actually saw... yeah, kind of a mess of a movie, to be sure... but a really fun mess with a nice heart to it plus some nice performances midst the terrible dialogue.

Okay, so the plot involves Dwayne (The Rock) Johnson as Ray, who is handily, considering the subject of this thing, some kind of rescue helicopter pilot who specialises in getting people out of near death situations. This is set up in the first ten minutes of the film with a daring escapade where Ray and his team go to rescue a woman who has been ‘quaked’ in her car so that she is stuck inside said vehicle, perched vertically on the side of a cliff. As Ray’s helicopter views the situation, it’s clear from the constant creaking and slight movements of the car that the down draft from the rotor blades are making the vehicle even more unstable. So Ray does what any good, gung ho rescue guy does in a summer blockbuster kind of movie... he takes the helicopter even closer... because, you know, we need the suspense of the vehicle slipping as his team try and rescue the lady while her predicament becomes less and less stable. Hmmm. Anyway, when one of Ray’s crew gets himself into just as much trouble as the person they are trying to rescue, we get to see Ray become a one man International Rescue and save the day with his bravery and derring do. Hey, it worked for me and I’m really not knocking Dwayne Johnson here... I think The Rock is a solid and watchable personality and he gives a credible performance saying even the cheesiest of lines in some films. He always takes it all very seriously and he always delivers his best. It also helps a lot that he actually looks like he could do some of the ludicrously dangerous things he gets into in the movies. So, yeah, dumb character but... well played and he still has my admiration for rescuing the credibility in some of the roles he finds himself in.

So, anyway, Ray is on his way to see his daughter Blake (played by Alexandra Daddario who is someone with a figure who, trust me, you really need to see in an earthquake movie... for reasons that may become obvious to some of my readers) and his wife Emma, played by the lovely Carla Gugino. Emma is divorcing Ray because of certain emotional communication problems Mr. Rock’s character has. However due to the various upcoming quakes predicted by scientist Lawrence, played by the always amazing Paul Giamatti, mother goes off to see a completely strange and irritating non-character played by... of all people... the lovely Kylie Minogue, while her daughter hangs out with new Dad Number 2, architect Daniel Riddick, played by “the real Reed Richards” himself, Mr. Ioan Gruffudd... the films token human bad guy who, it has to be said, doesn’t have too much time to make the transition from reasonable husband material to less than trustworthy, not very nice person before getting himself killed by having a big, heavy object landing on him.

And that’s one of the main problems with this film actually. The characters are all set up in a way that they seem to just be paying a token service to famous character clichés of movies of the past without actually getting a chance to really inhabit the role before the story function of their character’s plot device is fulfilled and we’re onto the next thing. So when Blake is rescued by two English brothers, one of whom is her new love interest, the film focuses on the daughter and her two new found fiends surviving and trying to get to higher ground in the hopes that her dad will find them... seeing as he’s Mr/ Rescue and all. This is cross cut with the other story arc in which we see Ray rescue his wife from the roof of a crumbling building and then having a bit of a disaster punctuated road movie journey to find their daughter... via helicopter, plane, truck and boat... while at the same time rekindling their own romance due to Ray suddenly feeling he’s able to express his emotions about the daughter they had who died years ago... just in time to use that set up as an ironic, “oh my gosh my other daughter is going to die and I failed to save her too” scene which turns out... in the end... exactly the way you know it’s going to turn out.

So... no surprises here and the stupidity of the people and science in some scenes is, to be fair, quite hard to swallow. However, that being said, there’s also some really nice stuff in here.

For instance, the characters may all be stereotypes but the performers are all doing their best and, although the actors in question aren’t quite able to render their characters anymore 3D than what’s been written on the page for them, they are all doing a really good job in at least keeping them likeable (or unlikable if that is the intention). So there’s that. Added to this, the things these people have to go through in this movie says a lot about the quality of the cast. It seems that a lot of the acting team were doing a fair amount of their own stunts in this one and you do see it on the screen in a lot of the shots. I remember sitting watching an underwater scene near the end of the movie thinking... wow, these people are really putting themselves through this for their craft. I suspect that certain sections of the production of this probably come well under the category of “gruelling film shoot” and so more power to the team of actors in this one... especially The Rock and Alexandra Daddario.

There’s some nice camera work in this movie, too. One brief shot from above a wrecked city looking down through the clouds took my breath away and I wish they’d have just let that one play out for a little longer than the couple of seconds needed for it to fulfil its function as a transitional establishing shot. Also, in regards to the photography, special effects and editing all working together in harmony... job well done. There is a lot of disaster strewn chaos and stuff happening through a lot of the scenes as earthquake after semi-unexpected earthquake assail our heroes but, and this is quite an amazing feat, it’s all choreographed in such a manner that you can see everything that is happening without getting confused and, because of the way it is shot, everything leads into something else in a logical fashion without causing you to lose your bearings amid all the madness. So, really, congratulations to all involved in this production.

One last thing... Andrew Lockington’s score for this one deserves a special mention. Now, I didn’t get to hear a heck of a lot of it, for sure, because the sound effects and design are pretty overpowering (which is one of the reasons why I’ve ordered a copy of the CD... so I can explore it way from the film) but there was definitely something interesting going on here and there were a couple of moments where the sound design and musical score kinda met each other, which really stood out for me. There’s a whole lot of rumbling, crashing and so on in this film’s audio track and, one of the key things they seem to be doing here is to put a lot of creaking in to indicate structural damage which is about to kick off again... as a way of ramping up tension. However, there were certain times in the movie where things were a little bit quieter... and this is where Lockington uses big drumrolls which kind of sound like a musical way of indicating that same instability. There were points where I couldn’t tell where the rumbling was starting and ending as the score took over. In fact, I began to get uneasy when I heard the drum rolls in case it meant something else was going to come crashing down on the main protagonists any moment. So, again, job well done on that and I’m looking forward to hearing the score unencumbered by the movie.

And that’s about it for San Andreas. The dialogue is lousy and there’s a visual moment right at the end of the movie, when the dust has settled, so to speak, which is really unbearably cheesy and it involves the American flag. It’s a terrible, terrible, over the top moment but, I guess that’s in keeping with the nature of the film and so I can kind of forgive it. Now, I’m aware that this film shares a lot of things which I was less than happy about in the new Jurassic World movie but, I’ll say it again here... I wasn’t expecting anything too high concept on this one so I really didn’t stumble out of this one disappointed. It may not be the best disaster movie around but it certainly had some nice things about it that other, more accepted movies of this nature could have done with and, at the end of the day, what with all the clichés attacking the audience left, right and centre, it had its heart in the right place. Not exactly the best movie your going to see here but if you like to see big structures toppling and lots of running about... well, you could spend your money on a lot worse at the cinema right now.
Posted by NUTS4R2 at 19:08