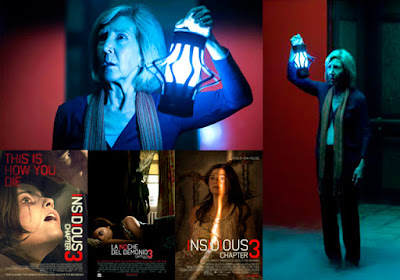 Insidious Elf,
One of the Family

My personal reactions to the Insidious films have been documented on this blog as each movie has been released. Regular readers may remember that I really didn’t think a whole lot of the first Insidious movie (reviewed here), dismissing it as mostly being a remake of the old Little Girl Lost episode of the original series of The Twilight Zone, filtered by way of Tobe Hooper and Steven Spielberg’s big budget reworking of elements of that story, Poltergeist, in 1982. Well put together but nothing we hadn’t seen done a fair few times before and with a disappointing last quarter of an hour or so which plunged it into teen slasher horror of the worst kind. Why I bothered seeing the sequel to this one is purely because I was curious as to how the ending of that movie could be used as a way in to the second. When I saw Insidious 2 (reviewed here) I found it to be a lot more interesting because of where the story had been left and a much stronger entry in the series.

Also, and I’m trying not to be spoilery for either that movie or this third part here, one of the more interesting characters in that second film was in a place right at the end where a sequel including this character in the circumstances she finds herself in at the end of that film would be most interesting and certainly something you wouldn’t normally see in a modern movie for a main character in a story.

As it happens, I kinda half got my wish but was initially somewhat sceptical when I found out that the third movie is, in fact, a prequel and, also, it wasn’t directed by James Wan, director of the first two films (and also the magnificent modern horror classic The Conjuring - reviewed here). However, having now seen it, I am actually grateful on a couple of counts that we’ve gone back in time a little for this one. Also, seeing that one of the producers is Oren Peli, whose Paranormal Activities franchise also time leaped back for the third movie (reviewed here) and strengthened the future films by doing so, meant that I’m not against the idea. This film might well be used for taking the franchise in a more coordinated direction in the future, I suspect. It’s also being directed by the writer of all three installments, his debut in this function, Leigh Whannel. Whannel also has a recurring role in all three films... but I’ll get to that soon enough.

So what we have here is a completely different set of characters and it involves a young girl, Quinn Brenner played by actress Stefanie Scott, who is trying to help hold everyone together in a small family unit comprising of her brother (played by Tate Berney) and her father Sean, played by Dermot Mulroney, after the death of her mother. She is quite distressed by her mother’s death (as anyone would be) and she still thinks she feels her presence trying to make contact. Desperately needing to talk to her departed parent, she seeks out the psychic investigator/medium from the first two films, Elise Rainier played by veteran actress (of 180 movies at time of writing) Lin Shaye. Now, the film is set only two years before the events in the first movie but, here, Elise has given up offering her unique services to people because of a dark phantom who tries to kill her every time she does. This is not what you would expect from the character only a short number of years before we initially met her in the first chapter and, as she slowly gets involved with trying to stop the demon who is terrorising young Quinn in a series of the usual, exploitative scare tactics inflicted on audiences in these kinds of spectacles, we are slowly revealed to the elements of her back story that initially got her there in the first place.

And this is why the film gets interesting and, frankly, does what all good genre cinema does... influencing mainstream thinking by going through the back door, hopefully. In this film, Elise is pretty much the main protagonist or, at the very least, as much of a main protagonist as Quinn Brenner, getting at least equal, probably more actually, screen time. It’s a strong, female role in a genre which has always promoted strong female roles, even as far back as some of the early 'Hammer Horrors' and it goes so much further beyond just the general whittling away of characters until you’re left with the one, final girl who becomes the strong survivor by default (a pattern even followed by Sigourney Weaver’s much celebrated character in the first Alien movie, of course). Now, on it’s own as a strong element of "gender in your genre", that’s all well and good and is probably a cause for congratulation... but that’s not the sole reason why I think this film is just a little more ready to indulge in some, almost subversive, shenanigans and why I hope the effect of this film might be able to have some slow but sure widespread influence, not just on the horror genre in general but in, hopefully, mainstream cinematic culture.

The thing is... I hope Lin Shaye doesn’t mind me saying that she’s no spring chicken. She’s 72 years old in fact. The role she is playing and how it develops and builds over the course of this film is kind of, by the end game, a psychic female action hero. When terrified by a demon in an other wordly zone (The Further), for instance, she breaks it’s grip with a head butt to the face and a bring it on kind of attitude which causes it to back down. She then proceeds to find her inner strength with a display of psychic carnage in this other plane and, mostly, wreaks havoc on her ghostly enemies like a modern, female Dr. Strange. How many other movies out there at the moment, or in a very long time for that matter, have 72 year old lady action hero’s kicking the villain’s butts? This is terrific stuff and unheard of for mainstream cinema these days... so I’m hoping that this will gradually be an influence on other horror movies, little by little, until it slips into main blockbuster cinematic syntax by a process of casual familiarity.

It’s okay to have very old, female heroes, folks... and guess what the average age of the target audience that a horror movie like the ones in the Insidious franchise are being aimed at is? Well, I don’t know but I’m pretty sure these things are being made for late teens/early twenties audiences primarily to be able to get the money back... so there’s that. Low budget horror movies usually turn a profit and this is the kind of genre where you can sneakily make this kind of change first... so something to think about there and I’m pleased with the writer for doing this.

Of course, another thing the horror genre does, by its very nature and due to an easy recognition of the visual language of the horror film, is to try and concentrate your attention away from where the scare is coming but, in a lot of cases and including this film, that also means turning the camera to places where the action is not happening and concentrating on different areas of the shot to give your mind a build up to the scare. Now, when you think about it, allowing other things in a frame to dominate over the actual action that’s going on in the rest of the shot is more of a European way of shooting a movie than something that would normally be accepted in a mainstream American piece. It’s a specific way of doing things and it’s no better or worse than any other kind of strategic visual aesthetic but I find it intriguing where the one kind of US mainstream cinema where that is encouraged is in the horror genre. I’m not saying it’s in any way a deliberate nod to a less native approach to shooting movies (and it wouldn’t have been seen to be either, up until around the late 1970s in US movie production)... it’s more just a symptom of the approach to being creative with some overly familiar genre rules at this point in the game... but it’s certainly something else which separates what you can get happening in a low budget horror movie at this time which wouldn’t be acceptable in a lot of other current commercial product.

The other nice thing about this film is the return, in the last third of the movie, of Tucker and Specs, played by Angus Simpson and the writer/director of this movie, Leigh Whannell - the two nerdy psychic investigators with their blog, 'Spectral Sightings'. It’s here we see them meet Elise for the first time and, due to events in this film, forge an alliance that will see them through to the team they have become in the first two movies and, hopefully, the quite unique team they will be in any subsequent chapters. There are some nice touches in here and, although I found some of the transition jumps in this movie a bit out of kilter with what I would have expected (and I don’t think that this was necessarily done on purpose but possibly from a lack of shots designed to be edited into a workable transition?), I think Whannell does a competent job as a director. It's maybe not quite up to the same standard as the second movie, to be sure, but it’s certainly a whole lot better than the first installment and, coupled with another winning score for the series by Joseph Bishara, with more melody being allowed to bleed into the atonality in this set of compositions than usual, then you have a pretty solid time at your local cinema if supernatural chills are your kinda thing. Still happy to go and see what they do with a fourth one on the strength of this and, frankly, the inclusion of a 72 year old lady action hero is something to be celebrated, no matter what genre it’s happening in. So maybe check this one out if horror movies are your kind of thing and, due to the chronological setting of this one, you don’t even really need to have seen the first two movies to give this one a shot. Enjoy.
Posted by NUTS4R2 at 18:55