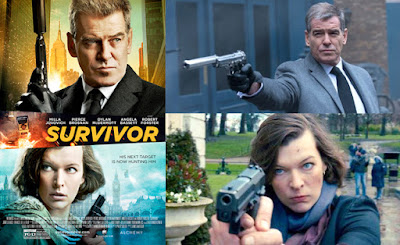 Okay, so Survivor is a film I knew nothing about going in other than what I saw in a trailer at the cinema the week before. That much being that it had Pierce Brosnan and Mila Jovovich in it, two very competent actors, playing a deadly game of cat and mouse with the pre-requisite mix of explosions plus running, jumping and shooting that seems to be part and parcel of all modern cinema these days. Fine, no complaints, I like the two leads and so I figured I’d give it a go.

As I watched the movie, it slowly began to dawn on me that this was the same film that I’d heard Brosnan was making about a hit man which was originally going to be called The Watchmaker. Now let’s face it, The Watchmaker is a way better title than the assuredly bland Survivor and how many films are they going to release with this title in the history of the cinema anyway?

So, anyway, this is the story of an American security agent, Kate Abbott (played by Jovovich), who has been relocated to London’s American Embassy to handle security on passport control and, when she gets wind that something is afoot, including a corrupt element on the staff, she is targeted for assassination by someone who calls in Brosnan’s watchmaker character... a highly paid assassin who is also doing another job for the same boss with a tryout in London for a terrorist attack in New York, set for a slightly later date.

And, of course, since Kate has a narrow escape when several colleagues die in an attempt on her life, not to mention being caught with a smoking pistol on the corrupt official who has not been actually revealed to her bosses yet, she has to stay alive while being hunted by both her own people and Brosnan’s ruthless assassin... while finding out what it’s all about and averting the terrorist act Brosnan will try to get away with at the end of the film. Standard set up and a pretty standard action movie, to be fair, but with a nice level of performance from all of the cast, including veterans like Robert Forster and, um, Frances De La Tour (funny how she’s started popping up in everything again these days).

So it’s kind of like a Jason Bourne film but with maybe a bit less intelligence on the part of the main heroine... for some reason she’s been written to not be that much ahead of the game which, I guess, makes things easier for the scripting to keep getting her into hot water with the killer but makes her a slightly less credible security figure in some ways... not Jovovich’s fault though, who does an excellent job. As does Brosnan playing a basic riff on the “hard man” side of his old James Bond character, only with less charm and more ruthlessness than audiences might associate this actor with... although it’s always been something he’s brought to the table in his performances in these kinds of action roles, to be honest.

The direction is very ‘work a day’ with nothing too flashy and a variety of different styles of shooting scenes that bring to mind no immediate signature. Sometimes he’ll go with long swooping shots, other times he’ll go with static shots with various cuts and still other times he’ll switch to hand held camera when it makes sense to do that dramatically or as an echo of the pacing and mental state of the main characters being shown on screen. There’s some nice framing in certain scenes and less obvious, less aesthetically pleasing frame designs in others.

For instance, the bulk of the action takes place in the heart of London, on streets I know fairly well, and there was a nice piece of framing where Milla Jovovich is walking through Chinatown and the director has taken the shot from a point of view where the vertical posts are all cluttered together and truncating the screen in a whole bunch of sections. This then transitions to a different character coming out of a flat where the fences on the right hand side of the screen echo the verticals thrown up by the previous shot. Then, the main part of where those verticals lead is again echoed as a single vertical splitter in the cut back to the previous character, by now at a different location.

So yeah, there’s some nice stuff going on in certain scenes but, for the most part, it’s a fairly straight, run of the mill action fest and... it’s no worse than a lot of the ones out lately and certainly has some good performances in it, as I said earlier. However, it seems to be set around the Christmas and New Year period and, what with the title change too, I’m guessing this film has had a somewhat delayed release... possibly due to a lack of confidence in it by the producers, I would guess. There would have been no need to worry though.. it holds its own pretty well and I think it would have been better if the studio would have gotten behind it a little more with the marketing, in all fairness. I wasn't aware of any real push on this and it was a surprise release for me.

One thing which they may be worried about is the baggage that Brosnan brings with him to the role. To be fair, both Brosnan and Jovovich have proven very capable of heading up their own franchises (Jovovich has the Resident Evil series) but I can see how the producers might be wary of having the former James Bond playing a villainous role. As it happens, Brosnan is absolutely fine playing against type but there was one moment, I have to admit, where I think his past role got in there to haunt him... although it’s absolutely not his fault, it was written that way. The thing is, Brosnan goes all the way through the film showing that he’s a) a ruthless killing machine who would end your life rather than leave a witness and b) that he’s not a superman and he does, in fact, fail to kill his prey many times throughout the movie... and it’s not for want of trying. Which is all very well and good except for one little scene involving a stairwell where, I have to say, Brosnan’s character pulls off a stunt which is much more worthy of his earlier, super spy roles and... while nice to watch... I think seems totally out of character for the role and I have to wonder if that particular sequence would have been tooled like that if it had been anyone other than Brosnan doing it. A slight mis-step there, I feel, but a forgivable one seeing as the rest of the film brings it back down to earth in terms of the action sequences fairly well.

Another good thing about this movie is the score by Ilan Eshkeri. He’s not a composer I’m that familiar with and I’m not the biggest fan of electronic, synthesiser scores either... which is what this one is. That being said, this is one of the more effective scores I’ve heard of that nature and it never seems inappropriate to the various on screen antics of the characters, helping to fuel some of the action scenes for sure... giving them a little extra as the baseline and percussion elements kick into overdrive. Such a pity this particular score doesn’t seem to have had a soundtrack release as I would definitely have liked to pick up a CD of this at some point. I’m beginning to come round to the electronic score as a viable alternative to orchestra a little more in later years, I have to say.

And that’s about all I’ve got to say about Survivor. There’s some really clunky dialogue in here, especially at the end of the movie, but the performances are strong, the action is well staged and the editing doesn’t get so confusing that you don’t know what’s going on... which is half the battle these days, it seems to me. Definitely should be a hit with those of you who like action spy thrillers and certainly not the worst work either Brosnan or Jovovich have done. By no means is it a terrible time at the cinema so, if you find yourself at a loose end anytime soon, this movie could be one to go on your “to watch” list, I reckon.
Posted by NUTS4R2 at 19:19