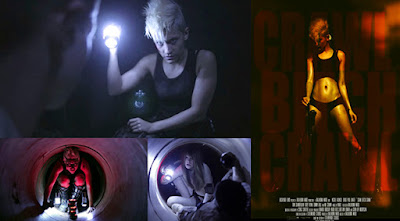 Crawl Or Die is a low budget movie which seems to have got a lot of traction amongst my twitter followers over the last year or so. Indeed, it’s only because I look in on Twitter from time to time that I knew this film even existed in the first place so, when it had its first showing on The Horror Channel recently, I got someone to record it for me. It’s a film I knew absolutely nothing about other than the title and the fact that a lot of people liked it.

Now, I’m not sure if I should have maybe read a bit about it before venturing in because I was a bit lost during the opening sequence of the movie, I have to say. I’d like to say that it’s because the writer/director Oklahoma Ward decided to start on an action sequence and then fill you in a little on the story in flashback after this... and to be fair, that’s exactly what he does. However, and this is really my only negative criticism of the movie, I think it’s more that I found things hard to follow in this opening sequence because it’s so darkly lit and seems to jump around confusingly. It may be because I was watching it in less than great conditions at the time, however, so that might not be a fault of the film.

Once we get the idea that a group of ‘action men and women’ are trying to escape from some kind of creature, we are then filled in on the plot, to a certain extent. The last fertile woman on the planet (known as ‘The Package’ and played by Torey Byrne) , uniquely free from infection by a virus of some kind, is being escorted to a spaceship to get her off the planet and heading to the mythical Earth 2. This, of course, implies that the movie is set on Earth but, since this is a projected trilogy of films, or so I’m told, I wouldn’t be surprised if it turns out that our own planet is Earth 2. Her specialised security escort is assigned with the task but they run into trouble and they are pursued by a big, insect like creature as they flee underground and find themselves navigating an increasingly smaller and claustrophobic tunnel system as they are pursued by the beast. They literally have to crawl or die in some sequences and we are left with the intelligence of the film’s resourceful protagonist, Tank, played by Nicole Alonso, to help the group survive and get the package to her rendezvous as best she can.

Now, the first thing which hit me about this film, even in the confusing (possibly deliberately so... due to budgetary constraints?) opening sequence, is that the acting and dialogue is extremely naturalistic. And by naturalistic I mean that the things people do and especially say don’t feel like they’ve been written. Now that may be just the result of having an excellent ensemble cast who perform brilliantly, and they certainly do, but I wouldn’t be surprised if there was a fair amount of improvisation in the dialogue here too. Certainly, you don’t have any trouble in believing that any of the actors are anything other than who they are pretending to be and...well... that’s to everyone’s credit.

Because of the locations used and the lack of showing an outside environment to any real extent, the film doesn’t really suffer from the smaller budget. It’s a bit of a double edged sword because I would certainly liked to have found out just exactly what the creature is that was pursuing them and, you know, why it was out there in the first place... but the director seems to make the movie work really well, despite possible shortcomings like this and he’s obviously a talent who will rise very fast if he can deliver similar films on a shoe string.

The cast is pretty amazing, as I’ve said, but special mention goes to Nicole Alonso as Tank, a character who I can only assume from both her name and her visual style, must be an homage to Jamie Hewlett and Alan Martin’s iconic comic book character Tank Girl. She is especially expressive during the course of the movie as she grunts and groans at the strain of having to crawl or force herself through various small places that must have been a fairly gruelling shoot in terms of the physicality of the role. I suspect she probably felt really silly being asked to do the same kinds of things over and over for take after take and it’s a real tribute to her hard work that she never once loses credibility in the part...

Which is pretty impressive when you realise that 90% or thereabouts of the film (no, I’m guessing but I bet I’m not far off) is pretty much free from dialogue. Instead we are left with the visuals, the sound design and the occasional piece of well placed scoring to help create the illusion of a fairly competently made science fiction movie which, by all accounts, is already garnering a solid reputation. In a way, it’s a movie which almost trades on the best parts of silent film acting and, like I said, Ward has managed to piece himself together a cast that are able to call on those kinds of skills to deliver the kind of film he wanted to make.

Also, and this kinda makes the experience worthwhile, there’s a bit in the movie about three quarters of the way through which I really didn’t see coming. It’s a surprise because it defies the expectations of the initial set up to the movie and, well, longtime readers of this blog will know that it’s incredibly hard for a movie maker to actually surprise me these days. So I’m particularly impressed by this and am happy that the writer/director played against the expectations created by the opening sections of his story.

And that’s about it. As I said, I watched this from an off air recording of the film’s premiere on The Horror Channel (the first thing I’ve watched from there) and, about ten minutes or so into the film, I found out the one, truly horrific thing about The Horror Channel that really ensures this TV station lives up to its name. There were adverts put in during the running time. Yeah, that’s right. Commercial breaks. It’s really lucky I was watching a recording of the airing and able to completely skip the stupid adverts... otherwise I would have had to stop watching the film altogether. I won’t put up with commercials or sponsors and, the way things are going on this planet just lately, I would urge everybody to give up on watching adverts completely. If they’re going to force feed that rubbish down your throat then seriously, do yourselves a favour, watch your shows later and jettison the adverts... they destroy the experience and, in my humble opinion, the abomination of the commercial break should be banned forever.

Anyway, because it was a recording I was watching, I was able to complete my viewing of the movie relatively uninterrupted and I’m glad I did. While slow moving the movie never really threatens to get dull and at some point the morbid fascination of watching people crawling down tunnels with no real dialogue becomes almost compelling. Crawl Or Die is not a classic movie by any means but certainly an interesting one and in todays market that’s not a bad thing to be. I quite enjoyed the experience and would like to see more of Oklahoma Ward and Nicole Alonso in the future... hopefully with a larger budget at the director’s command. One to watch out for, I think.
Posted by NUTS4R2 at 17:44