Doctor Who - The Green Death: The Special Edition 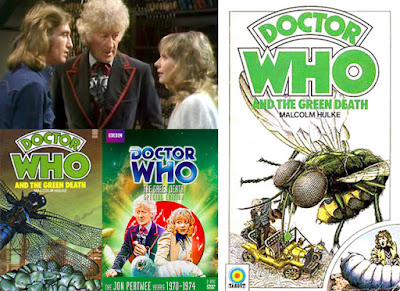 For The Larvae The Professor

Warning: Slight spoilers in this one.

I last saw The Green Death when it was first broadcast in 1973. I would have been five years old and I remember the giant maggots, which are a big feature of the episode, being a talking point around the house and a thing which would invoke both fear and playful memories of big, wiggly things coming to get ya! I wasn’t expecting it to be half as good as I remembered when watching it now on this special edition version of the DVD but... well... it surprised me in more than one way.

I’ve noticed over the past few years that the Doctor Who stories featuring Jon Pertwee don’t seem to age as badly as the ones starring Tom Baker, Peter Davison, Colin Baker and Sylvester McCoy... I don’t know why it is and the special effects are still quite shoddy, though not as shoddy as the ones utilised in the programme during the 1980s and 1990s... I can say with some confidence. The stories and, certainly, the dialogue and scripts, are all pretty top notch and tackle issues in exactly the same way that all of the best science fiction does... head on and by exaggerating certain elements to be able to explore the issue to a degree it would be less able to do without a science fiction context.

In this one, the big issue is ecology and the environment. It centres on a computer who has taken over the employees of a global oil company which is dumping toxic waste... it’s seeping into a local coalmine in Wales. Brigadier Lethbridge-Stewart (Nicholas Courtney) and the always brilliant Jo Grant (Katy Manning) go to investigate the deaths of people who come into physical contact the sludge, infecting them with a virus which turns them into a cheap 1970s TV effect... glowing green before claiming their lives. Jo declines going with The Doctor on a quick jaunt to the planet Metebelis 3, where he acquires a blue crystal which will cause him trouble later in the history of the show, because she believes the environmental work being done by Professor Jones and his group of ‘Eco Hippies’, combatting the global company who is responsible for the toxic sludge and the giant sized maggots who are breeding and infesting the coal mine, is more important... good for her. It also heralds the fact that this will be Katy Manning’s last TV adventure as Jo Grant until her brief return to the role in a two part story, The Death Of The Doctor, opposite Elisabeth Sladen and Matt Smith in The Sarah Jane Adventures almost 40 years later (and reviewed by me here).

Now, although Jo Grant was always a well admired character by me, when I was a toddler, my recent rewatches of a few of the old Jon Pertwee stories have made me realise that her character wasn’t all that well fleshed out or given that much interesting dialogue. Here, however, it’s clear that by this point she is really being written in a more useful manner and the focus on her and the dialogue/scenes she is given are all absolutely marvellous. And, of course, Katy Manning really makes the most of it, displaying great chemistry with all her co-workers, including Stewart Bevan as Professor Clifford Jones (she was engaged to him in real life, at the time, although I understand that didn’t last too long) who she goes off with to get married and travel down the amazon at the end of the last episode here.

Now the show is not without its weak moments...

There’s a loose end of a character when one of the principal actors had to drop out of the show due to ill health. The special effects are quite good in some places (the miniature work of explosions is good although the white action figure driving the model of The Doctor’s car Bessie in one shot is hilarious) but utterly abominable in others when it comes to the blue-screen work. Whenever any of the characters goes down the lift shaft in the coal mine, for example, they are quite clearly standing against a superimposed piece of back projection footage. Similarly, although there’s a lot of location work in a fair bit of it, there are a fair few terrible shots when the people at UNIT are walking or standing around a studio, superimposed against a backdrop of the open country. Now I’ve got no idea why this was needed and all I can think of was there wasn’t enough time to get all the shots required and, instead of going back out on location to reshoot, the decision was made to go with a studio solution. In all honesty, it really is quite noticeable and surely hurts the scenes when this is done.

However, everything else in this story seems right on the money and it even involves some scenes of Jon Pertwee returning to his comedy roots as he dons two ridiculous disguises to penetrate the security at Global Chemicals... one is a “funny milkman” personae and the other is the old “dressing up in women’s clothing” routine where he impersonates a cleaning lady. This is all quite amusing, if a bit clunky, but I can’t imagine what young fans of the show might make of all this dressing up shenanigans these days, to be honest. That being said, the costumes Pertwee wears as The Doctor are, as usual, absolutely brilliant and I just wish I could get the crushed leather jackets and the frilly shirts that he got access to on these things... I’d be wearing them all the time.

Not too much else to say on this one. The score by Dudley Simpson is lively and typical of the show in that era, the giant maggots are actually fairly well done but when one of the larvae hatches, the resulting, dragonfly like creature is quite badly handled. However, when The Doctor steps off the TARDIS on Metebelis 3 and a tentacle suddenly whips out from the front of the screen and goes straight around his neck... I have to say that it was so effectively done that it actually made me jump. Something these kinds of shows don’t really do to me that often... at least not since I was a kid, at any rate. The end is quite poignant too and I’d be lying if I didn’t say the last scenes with Pertwee and Manning didn’t bring a tear to the eye. Overall, I’m really impressed that The Green Death has held up as well as it has and I think it’s certainly one of the best Pertwee stories and also, I would say, one of the best of the stories in the history of the show. Now I just have to figure out which Pertwee story to acquire next.
Posted by NUTS4R2 at 19:22