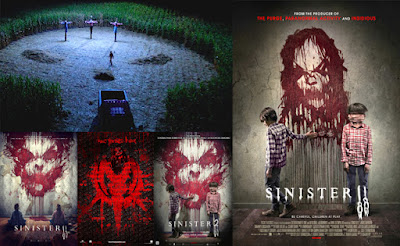 Warning: Very slight spoilers on this one... I suppose.

You know, for a movie series which highlights a supernatural entity who sows terror by getting people to document brutal deaths and using the aesthetic properties of a specific medium such as film, music, radio etc to do it... and then hold that exact same thing up to the audience as a form of entertainment, reflecting the very method the sinister perpetrator of these films uses to perpetuate his own mythology in a post-modern, ironic manner... is really something that I should probably find very appealing, interesting and comforting within the context of a modern horror movie.

Alas, the Sinister films, it seems to me, take this promising premise and then just throw it away, ham-fistedly, in an attempt to chase a specific kind of horror audience which probably hasn’t existed in truly profitable numbers since maybe the late seventies or early eighties drive-ins. I honestly was hoping for more from the second part of this franchise but... this film delivers something far less palatable and, while it does still have a few nice things in it... I really would have been cursing the studio for turning out this film following the last one...at least if I’d have had more of a liking for the first movie which, luckily, I really don’t.

When I reviewed the first Sinister movie here, I pointed out that the only truly good things in it were the performances (including one by the always outstanding Ethan Hawke), Christopher Young’s score and a very surreal scene of ghost kids running around a house. These were pretty much the only things of any interest the first movie had going for it so... well... you might well ask why I bothered seeing the second one. And the answer to that, dear reader, is because I really didn’t think much of... Insidious.

I reviewed the first Insidious movie here and it really wasn’t anything to write home about. However, when I ended up seeing Insidious 2 (reviewed here) and Insidious Chapter 3 (reviewed here) I found both the sequels to be much more interesting movies than their original counterpart and so... I was kinda hoping the same effect would kick in with the Sinister franchise but... yeah, it seems not.

Sinister 2 doesn’t really have a lot going for it, it has to be said.

Like movies such as Jurassic Park (reviewed here) and Wild At Heart, Sinister 2 moves you straight into a traumatic event taking place. This opens with supernatural occurrences being visited on the audience straight away with both a ‘film’ of people being burned alive on crosses... followed by one of the film’s main child protagonists hanging out with a set of ghost kids. Unlike both Jurassic Park or Wild At Heart, however,  it doesn’t frighten you or set you up to feel really afraid of the possibility of certain things happening... it just makes everything feel a lot less creepy because there is no slow burn lurking terror to help along the ‘scary bits’... and the timing of those kinds of scenes and the way they are handled in this movie just makes them... well... they’re just not effective, you see them all coming and you certainly won’t be frightened of them. All the best scares in this movie were in the trailer and... they’re really not any scarier within the context of the movie as a whole.

Another thing is that the majority of the characters are just not in any way sympathetic... I’ll get to the ones who are in a minute. The two kids are not someone you’re really invested in saving from the possibility of their horrible fate and the abusive father figure in this film is really just setting you up so it’s okay by you if he dies a gruesome death... even if the end result of that particular scene completely contradicts the opening of the movie. Yeah... so there’s no logic in this movie anymore because they jettison it in the final act. Really, there were very few characters who I wanted to see survive this movie anyway and since, as it turns out, they’re going to show us that things we’ve already seen really weren’t as were presented and then alter how the events turned out then, by that point, I really don’t care anymore.

Thirdly, the murders committed by the various children in this are brutal to the point of just making for a really mean spirited film. I really don’t enjoy seeing the documentation of atrocities such as the ones on display here and it smacks of just being gruesome for the sake of it... rather than feeding into what could have been a great, supernatural movie.They even use the old medieval torture of having a live rat gnaw its way through someone’s body to escape a heated prison trick... except they do it to five people in one hit here and this, along with a couple of the other murder variants in this story, make the movie really uncomfortable to watch and, though that’s probably the point, the irony of the central premise becomes lost because it’s really no fun to see this stuff shot and presented the way it is here. This is meant to horrify and it does... but that very literal interpretation of what a horror movie should be doing really does harm/cancel out the supernatural dread which the film is, obviously, also trying... and frankly, failing... to create for the audience.

Fourthly... they’ve tried to expand on the eerie ghost kids sequence in the first movie way too much and ultimately, the whole scariness of that is shot down right from the word go, here. It’s like half the movie is trying to be a less effective version of that scene and, really, it doesn’t work even once... especially at the end where we get the POV scenes of characters who can’t actually see the kids reacting to what are presumably, to them, poltergeist like disturbances. This obviously completely erodes any logic of having the main antagonists having to use living people to do their killing in the first place. Seriously... what is the point?

I said there were a couple of good things in this too. Well the unnamed deputy character played by James Ransone who was so good in the first film returns in a much larger, main protagonist role as the equally unnamed ex-deputy character from the first film... and he, for some reason, has some great lines and seems incredibly well fleshed out compared to everyone else in the movie... even though we still don’t know anything much about him. His scene with a character called Dr. Stromberg, played by Tate Ellington, which links things more back to the first film, is the standout scene here... mixing genuine spookiness with some great one liners, relying very much on Ransone’s comic timing. And most of the way through the film... you will be rooting for him until the dreary miasma of general nastiness dulls everything down, leaving this particular audience member weary and uncaring.

Similarly, the main female lead played by Shannyn Sossamon, is equally interesting and works really well with Ransone’s character. She’s not quite as well written as him and, at the end, when she really does metamorphose from being a strong, resilient character to a full bodied damsel in distress... well, I kinda gave up on her too, to be honest.

Tomandandy’s score to the movie is serviceable, highlights a certain creeping dread and does what all good modern combinations of atonal stinger and ‘lurking in the realms of sound design’ horror scores do... but it’s trying to imbibe the movie with a certain amount of terror which, alas, the film just really doesn’t have in abundance. I’d listen to it away from the movie... and probably will if it comes out on CD as opposed to a stupid electronic download... but it really seems to be trying to score a film the director and producers wanted to make, as opposed to the one they ended up with. At least it feels like that to me.

So that’s that, I think. Unless any future sequels... and given the box office take on this so far that’s possibly in doubt now... are actually great works of art, then this is the last time I’ll ever have to watch Sinister 2 and, really, I’m not unhappy about that. If you go to see horror films to see demented goriness which makes no sense and which pales in effect due to the way its presented... then this is for you. If, however, you go to horror films to see how the director can both use and bend the rules of the horror film to evoke an emotional response in the viewer and to see if anything new or interesting can be brought to the table... well... Sinister 2 is definitely something you can miss out on. The only sinister thing about this one is how they could manage to make a sequel worse than the first movie.