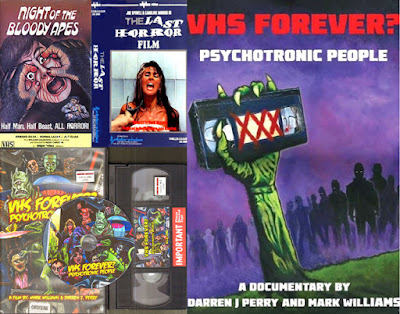 So I’d heard about this relatively new documentary film from the tail end of last year via Twitter, got kinda interested in it and then promptly forgot about it, what with all the other digitalised celluloid attractions on offer these days. However, when I realised I’d only been to three film fairs this year, instead of the 13 or so a year I was knocking back a few short years ago (due to varying reasons, mostly budgetary), I realised that I should maybe get myself down to the latest Camden Film Fair and see what was going on... mostly because I’d been hoping to catch up with the stall of the Camden Fair’s organiser at this year’s London Film And Comic Con (reviewed here) and, like a fair few other dealers, he’d not bothered with that one this time around.

Anyway, when I got there I visited a stall run by Tony & Donna Clarke of the Psychotronic Video Store (www.psychotronicstore.com) who were selling a fair few treasures, including the beautiful limited edition (only 300 copies folks) Lucio Fulci playing cards I’d bought a few weeks before and, among the many gems available, was this movie. So I thought, yeah, I still wanted to catch up to this and, once I’d been around all the stalls at the show, I went back to make the purchase. I was further surprised when one of the directors of the movie, Mark Williams, was there to sign copies for people... which was great.

Now, I’ve seen a few of these small, independent low budget documentaries over the last few years, my favourites being the two epic docs on Video Nasties (reviewed by me here and here) and this is probably one of the lowest budgeted I’ve seen. The IMDB entry for VHS Forever lists it as costing approximately £1000 to make and, I have to say, for the small amount of money it cost, the writers/directors have come up with a very entertaining and fairly informative, depending on how much of this stuff you already know, little homage to the early days of VHS collecting.

Now it would probably be remiss of me not to point out that this particular documentary film is about a very specific aspect of early VHS collecting in this country and, sadly for me, it’s an aspect of the scene I missed out on as a teenager because I was more interested in World Cinema at the time than many of the movies covered here, although watching this film has made me realise I might have a couple of cardboard sleeved rarities sitting on a shelf somewhere which may bear further investigation. There’s not much of anything about the early days of UK collecting when the budget arm of the sell through market was established and tapes were coming down in price, for example. You won’t find The Video Collection label and their early hits like Bringing Up Baby and Invasion Of The Bodysnatchers being praised and lionised on here. But you do get another view of the world of the pre-certification, video nasty style horror market and the first hand stories of the people who used to buy these. This makes it very much a companion piece to the two Video Nasty documentaries I mentioned earlier and, although it won’t mean a heck of a lot to a certain section of the VHS buying market, to me this is essential viewing.

The film covers a little bit about the infamous banned list and the stories of the victimisation of the people who used to buy and sell these tapes and, once again, highlights how out of step the UK was, and still is, with the rest of the planet in regards to trying to conform and control what an individual should be allowed to watch on his or her TV set. Another thing which makes it valuable to me is the kind of people the crew interviews for this movie. Along with well known and well loved names like Norman J. Warren, Lloyd Kaufman, Caroline Munro and Kim Newman, they’ve also got some of those less well sung experts like Nigel Burrel who, perhaps, should be better known amongst lovers of film than they are right now. There were a fair few people talking, also, who have taken my money over the last few decades at shows like the Camden and Westminster Film Fairs and it was kinda nice to see them and, also, rewind them to catch what they said again when I realised the locations they were being shot in meant I had been concentrating more on the background to see if I saw either myself or one of my friends wandering around rather than paying attention to what was actually being said.

The film is not going to give you a thoroughly detailed account of the persecution and horror that people were up against at the time... I remember a lot of the kids in my old school playground used to swap copies of tapes that would have given Mary Whitehouse an absolute fit if she’d have known how easy these things were to get a hold of for teenagers or younger, some of which still wouldn’t be allowed in this country or many other countries due to various laws... but the film does give a lot of interesting stories and reminiscences by a few of the hardcore collectors of the time that are vastly entertaining and well worth the £10 I paid for this DVD. This includes stories about visiting the original Psychotronic Video store in Camden in the 1980s and its infamous ‘back room’, where certain highly prized and riskier titles might be purchased in illegal trade.

It also talks to some of the illustrators at the time who were responsible for the fantastic artwork on the sleeves of some of these things and, furthermore, interviews some of the modern poster and sleeve artists who were inspired by them... I now know why we still get the odd, fantastic exploitation sleeve like the one used for Hobo With A Shotgun, for instance (reviewed here). So, yeah, one of the things which sticks in my mind about this film... and it’s something I think I was half aware of before but this certainly drums it home... is that the lurid artwork of the sleeves themselves were as easily responsible, if not more so, for making some of these dubious pleasures targets of an increasingly watchful yet uncomprehending government body. And, yeah, I think it’s good that the filmmakers here have included the graphic design element of the original tapes and it also leads to two scenes where one of my favourite people of all time, the always lovely Caroline Munro, talks about the artwork on a couple of the VHS sleeves of movies she’s been in, namely Dracula AD 1972 and The Last Horror Show.

Now, one of the most noticeable aspects of this film is that the quality is questionable and this might possibly put some people off... however, it should also be pretty obvious to a lot of people who spent a fair amount of the 1980s watching VHS transfers that the footage has been deliberately shot like this, possibly even downgraded, to look a little fuzzy like an old VHS recording. It’s also shot in a 4:3 aspect ratio to emulate the horrible pan and scan look which was a feature of many of those early cassette tapes... and one of the reasons why I stopped buying this stuff until they started releasing widescreen editions. However, it works pretty well here regarding the subject matter and the kinds of people who are going to want this account of years gone by in their library are probably not going to have a problem with it... it’s certainly endearing.

All in all, I’d say this movie isn’t going to exactly appeal to a great amount of people but for individuals like myself, who were around during these days and remember having to go and approach dodgy looking people on the streets of Camden Town if we even wanted to be in with a chance of acquiring withdrawn movies like Kubrick’s A Clockwork Orange... then there are a lot of memories, stories and judgement calls about those days which are quite appealing. Also, it’s edited pretty well and some of the transitions between segments of interviews leading onto other comments by people are intelligently done and their juxtaposition gives all the sides of the story on certain issues without clinging to a specific agenda... which is a good approach to take if you are trying to give an overall picture and capture a specific zeitgeist without trying to gloss over the inherent problems which were made manifest by this area of ‘the VHS scene’.

VHS Forever - Psychotronic People is a charming look at a time which people from younger generations won’t know much about but which is still relevant to the current issues of censorship and film trading going on now... I can’t remember how long ago since I last had to wait outside the Electric Ballroom until the police had finished raiding the Camden Film Fair and confiscating materials... but it can only have ben a couple of years ago at most and some of the questionable (and therefore often the most fun) things you can get at these kind of film oriented events are really not that different to what was going on 30 or so years ago. So this is definitely a film which a specific section of modern cineastes of a certain kind are going to want to get their teeth into, methinks. At any rate, it’s something I’m very pleased I bought and probably a movie I’ll be dipping into again and again for reference purposes over the coming years. So put this one on your list if this specific kind of home video subculture is something you either remember from the time or have an interest in... you should have a fun time with it.

VHS Forever - Psychotronic People is a limited edition but, at time of writing, it’s still available to purchase here... http://psychotronicstore.com/index.php?main_page=product_info&cPath=5_29&products_id=3385

There is also a facebook group for the film, if that’s your kind o’ thing, here https://www.facebook.com/groups/784032254947602/ and the main website page for the film is here www.vhsforeverthemovie.com
Posted by NUTS4R2 at 19:00