The Death of “Superman Lives”: What Happened? 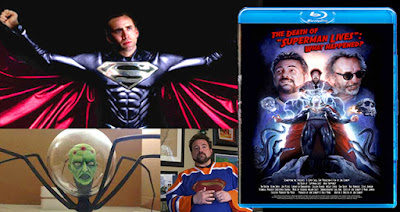 You know, I’ve been a big fan of Kevin Smith since first seeing and admiring Clerks, a few years after its initial cinema run, and one of the most entertaining stories I ever heard him tell was the routine where he goes through his side of what happened when he was hired to rewrite a draft of the screenplay to the movie Superman Lives... or Superman Reborn as it was when he was first brought on board. It’s an amusing story and, basically, Kevin Smith showed how a messed up few people started bringing on ridiculous sounding ideas and when Tim Burton came on board the project, Smith was told to depart.

I’ve always wanted to know more of what went on behind the scenes though and now, thanks to this crowd funded documentary by Jon Schnepp, we can get at least a little more of a glimpse of not only the stupidity and bad decisions which brought this movie down but also a look at some of the hard work the very talented people who were hired to conceptualise this preposterous venture did for the cause.

I remember reading about the pre-production of the Superman Lives movie when it was happening back in the early 1990s. Bringing on Nicholas Cage seemed a bit strange in terms of casting the film at the time (although I now believe he could do something credible, at least) and the designs of the costume which were leaking, backing up the idea that the studio were going to dump the famous look of the Man of Steel, wasn’t doing much to turn me on to the project, to say the least. I was kinda glad when it fell through at the time although, I have to say, the subsequent Superman movies we’ve had in its wake, especially the last one, have been less than what they could have been.

For this documentary, Schnepp has interviews with several of the key players involved including, of course, the aforementioned Kevin Smith... along with Tim Burton and Jon Peters. I’m really puzzled as to why Peters agreed to do this because, although he seems to be going through the motions, in some places, of defending himself against Kevin Smith’s portrayal of him and his part in this fiasco, it seems to me he comes off really badly. Peters says some things here and you kinda want to take him at face value but then, when you realise that what he is saying in some instances seems to contradict little details of what the facts are... and then you stack it up next to stuff a lot of other people say about Peters, well... if it comes to the question of Peters VS Smith, I think I personally believe Smith but, luckily, we have this documentary so you can make up your own mind.

Now Smith’s involvement ended very early on but we have some of the other writers highlighted in this film and also the conceptual designs and paintings done for this production. Some of it looks great and some of it looks, ill informed. It doesn’t take long before you realise the production had a mountain of really great talent working on this thing that were, somehow, not really handled in a way that would work for the studio. And you also have Tim Burton who comes off as quite an interesting guy on this. It’s obvious that he doesn’t value Kevin Smith's contribution still... and I was so on for this documentary to have Smith and Burton in the same room together and burying the hatchet because, it seems in terms of their attitude to the production, they have a lot of common ground. Alas, it’s not something Schnepp was able to pull off in this one but it seems clear to me, from Burton’s choice of words in some scenes that... yeah... he’s not the greatest fan of Peters either. I may be wrong but... see what you think.

The documentary is really nicely put together and includes a lot of test footage of Cage trying on various Superman suits and it also addresses the issue of the “regeneration suit” which was misconstrued by a lot of people interested in Superman Lives when it was seen at the time. Using live action and animated scenarios put in to ape some of the scenes which never were, Schnepp manages to work with the material he’s got of people describing their involvement in the project but still makes it relatively entertaining and interesting for even the casual observer. The scoring got to me a little bit and I think it was either dialled to prominently in the final mix or maybe was a little inappropriate and distracting in places... but overall the film is a nice piece of work and, certainly, something people interested in this story definitely need to see. I don’t rate the movie as highly as a similar project, Jodorowsky’s Dune (reviewed by me here) but that’s quite possibly because the stories told in this one were never gonna be as crazy as what was going on with the Jodorosky project... but it is a definite one not to miss if you are interested in the production of movies and just how badly they can go wrong.

Ultimately, the message I took away from this documentary is that, although I never even wanted to see the finished project, there was a great tragedy here on the film's cancellation because a lot of work had gone into this from a lot of people and, even if the movie had been made and received badly, it would have at least been a very interesting failure... for sure. Certainly, with all these years gone by and with the sense of perspective watching The Death Of Superman Lives: What Happened? has given me in regards to the fate of this film, it’s one I can imagine might have been better left running its course. At the same time, I can totally understand why Warner Brothers pulled the plug on it a number of years into the project.  But, whether you would have been a fan of the finished movie or not, this account of why it didn’t happen and, as interestingly, how bits of it did happen for a while, is certainly something most fans of movies and superheroes are going to want to take a look at. The film is available for download and in physical form from this website here... http://tdoslwh.myshopify.com/
Posted by NUTS4R2 at 12:05