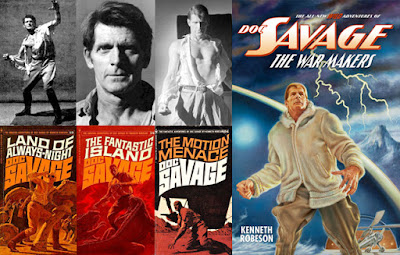 Doc Savage - The War Makers
by Will Murray as Kenneth Robeson
From an outline by Ryerson Johnson
Altus Press
ISBN: 978-1618271495

And here we all are again.

Will Murray, the modern version of the old Street & Smith house name of Kenneth Robeson, carries on where Lester Dent left off with another of “The All New Wild Adventures of Doc Savage” and, although I’ve found a couple of his more recent novels a little questionable in terms of ‘authenticity’, this one continues in the style of one of his regular, solid reads. The War Makers is the usual Murray Doc Savage tale... that is to say, it moves along at a cracking pace, entertains, enthralls and is altogether appropriate, just like the majority of these new adventures, to the style and content of the original Doc Savage stories.

Now, I kind of knew this before, although I never really bothered to research it but, of the original 181 novels published between 1933 and 1949 there were a few, and I’m not sure how many and if the count is even in double figures, that Lester Dent was too busy to write himself. At these times the magazine called in a couple of other writers... although I understand that Dent still had an input (and possibly approval) into the majority of the few he didn’t write himself. One of these writers was, apparently, a man called Ryerson Johnson. He wrote three of the published Doc Savage adventures under the Kenneth Robeson name back then: Land Of Always-Night, The Fantastic Island and The Motion Menace. While he was still alive, he apparently struck up a friendship with modern Doc scribe Will Murray. So what Murray has done with this tale is to use one of Johnson’s story outlines, which was rejected from the original run of novels way back when, and has used that to write the story which is here called The War Makers. Which is interesting as, not only is it a partial sequel in terms of one of the key elements of The Motion Menace, he’s also turned it into a sequel to one of his recent adventures... of course, I’m not going to tell you which one because a) I don’t want to spoil it and b) it’s a stand alone adventure which doesn’t need any knowledge of the other two to be able to understand it.

So what we have here is one of the more simply plotted of the recent Doc Savage adventures... which really isn’t a bad thing. It’s quite linear but takes in more locations and gives The Man Of Bronze, four of The Amazing Five and his cousin, Pat Savage, more than a lethal handful to deal with in terms of challenges and adventures. Saying that, although the premise is quite simple and may seem, to modern audiences, to hang onto an idea which is a little 'old hat'... I might remind that same audience that, although the ‘menace’ of this novel comes from a very old science fiction concept, it’s still based on technology we’ve still not quite harnessed as yet... so it’s very much showing Doc and his world as somewhat ahead of modern times, let alone the decade in which this story is set (which I think must be the late 1930s/early 1940s?).

The novel starts off exactly as you’d expect a Doc Savage novel written nearly 80 years ago to open... with a brilliant hook that suggests the impossible, offers the promise of suspense and is then promptly explained in terms which give it a little more credibility without taking away the sense of the fantastic yarn ahead. This one starts off like this...

“It was a red rubber ball that started the chain of events that shook America from coast to coast. An ordinary ball of vulcanized rubber purchased in a five-and-dime store and given to a boy of eight for his birthday.”

It immediately reminded me of a Doc Savage novel I’d read a decade or two ago where it started off with a sailor eating an apple and, by eating that apple, he causes the death of all his shipmates. An astonishing statement followed up by logic, of a sorts, which kept you turning the pages... it was always a thing you’d get in the original tales and, as usual, Murray delivers that element in spades.

Saying that, I noticed that he’s maybe getting a little more poetic with some of his prose. Doc’s unconscious trilling sound, for example, is something the various 'Robesons' usually make a point of highlighting and I noticed that Murray’s latest does that and a good deal more...

Not that I didn’t enjoy it, myself and certainly it didn’t feel out of place... just a little more visceral and removed in its imagery, somewhat. Nothing wrong with that, though, and it’s always nice when you know the author is having just as much fun writing these things as the audience is reading it.

The adventure brings all the chills and spills that a Doc Savage tale should bring to the table and has the odd, eyebrow raising twist to it which always pushes it just to the edge of credibility... while still being able to maintain a scientific grounding, or at least the pretence of one, in the proceedings. In this one, for example, there is a lethal deathtrap awaiting Doc and his crew which is simply a load of rattlesnakes left in the grounds of a building for them. Which sounds mundane enough until you are told that they can’t be heard because they’ve had their rattles biologically removed in order to sneak up on their prey and take them by surprise. I don’t know if it’s possible to do that or not in real life but it sounds just about plausible enough that my brain will let it slide which, given the nature of much of the scientific chicanery that makes up the basic ingredients of the Doc Savage stories (and this one is no different in that respect), is about right for the tone of these. I’m sure Murray must know this stuff and, when he’s weaving a fiction as potent as this, who am I to disbelieve him.

There’s also a nice lot of references for long term Doc Savage fans and I think this is something that Murray’s been doing for a while... where he’ll mention past adventures and asterisk them with the title of the original story he’s talking about. This is something the old Bantam reprints used to do in the 1960s and 1970s. Another nice tie-in to the Bantam reprints, of course, are the covers which are in the style, somewhat, of the old James Bama painted covers. What I didn’t realise until this time around however, is that the artist on this edition, Joe DeVito, actually used one of Bama’s old, unused photo references of his model Steve Holland, who modelled for the majority of those old Bantam covers. Steve Holland was, of course, the man who played Flash Gordon in the awful, USA/German TV show in 1954/55... a show which seems to me to be about as far removed from Alex Raymond’s original concept of Flash Gordon as you can get (and not a patch on the 1930s theatrical serials starring Buster Crabbe). So much so, in fact, that Holland is still probably best recognised as being the painted face of Doc Savage to this day.

My only passing criticism of this one is an off the cuff remark by one of Doc Savage’s aids about one of the characters being a “modern day Mata Hari”. Now, Mata Hari would have been only 20 - 30 years dead before the events portrayed in this novel so... I’m not so sure someone would say that something 20 - 30 years before would have a “modern day” equivalent. That’s no time at all... or is it that I’m just being an old person now and assume, like me, that everyone else sees the last few decades rushing past at the rate of maybe an hour or two? Yeah, probably that, actually. It’s more a criticism of me than it is Murray, I suspect. My problem, not his.

Either way, though, Doc Savage: The War Makers is one hell of a ride for fans of The Man Of Bronze. More linear and stripped down in terms of plotting but with the usual flair and blistering prose that make the majority of Murray’s Doc Savage tales absolutely brilliant reads and a very worthy, solid set of novels to sequel the originals with. If you are a Doc Savage fan, or even if you’ve never taken a ride with The Man Of Bronze before, then this one is a terrific read and a true page turner. Miss it at your peril.
Posted by NUTS4R2 at 19:20