The Saint Takes Over 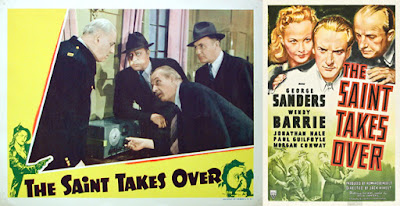 And, once again, I’m back into the process I started a couple of years ago on this blog, that of rewatching all of The Saint movies. This one is called The Saint Takes Over and is the first one, as far as I can make out, not having the direct writing influence of the character’s creator and scribe, Leslie Charteris. The previous movie was also not based on a Charteris novel but it did have his involvement in developing the script... which was a surprise to me considering the gimmicky nature of the previous outing, The Saint’s Double Trouble (reviewed by me here).

Now it always makes me scratch my head when the makers of films based on the books of a prolific writer such as Charteris (there are so many Saint novels out there) choose to do their own thing with the writing rather than call on any number of a wealth of already great books involving the character but, there you go... maybe they got away with paying Charteris less for the use of the character rather than base it on one of the novels, who knows? What I do know for sure is that there’s no real drop in quality in this one.... although the Simon Templar character seems to be much more honest and playing up to the “modern Robin Hood” reputation he has earned in the fictional universe in which he exists. Perhaps to temper Templar’s lack of true criminal deeds in this one, George Sanders manages to play him, with the help of some well written dialogue, as still existing as that character with no drop in credibility at not “rubbing anyone out” or “thieving money”. Indeed, the one slight untruth he wishes to bring into play as a fiction created for the police is even exposed by the person he’s trying to protect in a scene right near the end of the film... but I don’t want to give away too many spoilers on this one.

The film opens, and I think this must be the first time in any of The Saint movies, with an animated version of Simon Templar’s famous stick figure at the beginning of a more standard credits sequence... accompanied when this animation is active, by the whistled version of the title character’s signature melody, composed by either the film’s “music director” Roy Webb or Charteris himself... depending on who’s story you believe (for more on this dilemma, see some of my other reviews of the earlier Saint films). I don’t know if an animated figure features in any of the later films in this series (I will know soon but I can’t remember from the last time I saw them all, decades ago) but I do remember they used to use stick figure animations on the end titles of the Ian Ogilvy TV series The Return Of The Saint... which also made use of that famous, musical jingle as an ingredient of its theme tune.

After the credits we see Sanders playing The Saint using his Sebastian Tombs identity and behaving in a less than welcome, forward manner on a cruise ship (which is something Sanders could always get away with in that he was pretty much typecast as “a cad” as an actor). The brunt of his affection, Ruth Summers, is played by Wendy Barrie, who also played the leading lady in a couple of the other George Sanders movies about the character. Bizarrely, she played a completely different character in each of these movies and it wasn’t until she followed Sanders into The Falcon series of movies, the following year, that she got to play a repeat character opposite Sander’s hero. The Saint saves her from a couple of card sharks and also gets to paraphrase the famous Dorothy Parker quote “Men don’t make passes at girls who wear glasses” with the line “Don’t go to bridge classes with men who wear glasses” here. This made me chuckle and I guess that must mean one of the film's two screenplay writers, Lynn Root or Frank Fenton, must have been a fan or, remembering the circles Parker moved in at the time, possibly knew her at one point.

We also learn in this sequence that the New York Police Inspector Fernack, played so wonderfully again by Jonathan Hale, has been suspended from activity by the police. In fact, he’s been framed by a collective, criminal ring of mobsters who planted $50,000 in his safe. Soon enough, both Templar and, in a quite obvious twist which I won’t comment on too much here because it deals with something which some people might still consider to be a ‘reveal’, Ruth Summers, plus the wonderful Paul Guilfoyle as new series regular Clarence “Pearly” Gates... are all working, one way or another (by the end of the movie), to clear Inspector Fernack’s name. This is proving difficult because, each time Templar and Fernack try to isolate one of the key witnesses to testify about the frame up, they end up dead and in such a way that it looks like Fernack has rubbed them out himself.

That’s about as much as I’m going to say about the plot of this one because it is fairly simplistic but there’s more than enough to make up for it in the way of sparkling dialogue and the way it’s shot.

The film is full of loaded comedy shenanigans with Sanders and Hale bouncing lines off each other... with Fernack once more finding himself working with Templar when he really should be handing him in to the police as a key suspect. It’s fun to see him at a loss, too, when he complains at the start of the film that, now he’s been suspended, it feels funny not to be going into work. Fernack’s wife hands him the washing up from their breakfast and says, “Thats what you think is it? That's your mistake Henry. Youre just going to find out what real work is." Which is a nice, comic moment with a certain amount of truth I’m sure a lot of housewives and househusbands would clearly identify with.

The way the movie is shot is not overly creative but it’s certainly not nearly as dull as it could be. Asides from the great noir style lighting making full use of hard to see sets and landscapes, shadows and silhouettes, as was standard practice in the days of cinema when the directors weren’t afraid of leaving the lights off in scenes, there are also some nice touches which director Jack Hively gives the film to lift it out a bit where other, less conscientious directors, may well have left it a more mediocre concoction. He tends to use a lot of moving camera, for example, and in a scene where a character has to read from a paper, he has the character and his associate walk around the room to read from the paper, the camera following them to raise the level of subconscious interest in the visual style and thus aid concentration of the otherwise dull trotting out of plot points.

There’s also a nice bit of visual shorthand where two of the many villains of the film, although one turns out to be an ally by the end of the picture, are introduced by two big photos in a newspaper with a headline explaining their story function... backed up by some dramatic, sinister music which tells you right away that there is villainy afoot and the film makers would like you to associate that villainy with these two, for the time being. This is, obviously, a tried and tested formula for these kinds of movies and, although it’s slipped out of use... presumably for it’s quick fix, clichéd familiarity... it certainly contributes to the director’s overall speedy pacing of this movie... which is a valuable asset when you consider that these things were just a little over an hour in running time, presumably released as B-features, and you really did have to move quickly to try and cram everything in.

There’s also an interesting bit of ‘almost’ product placement here. At one point, Pearly Gates is reading a newspaper and it’s made very clear he’s reading the Dick Tracy cartoon strip in the paper. Later on, the same character is reading one of the actual issues of the era’s Dick Tracy comics. Now I did some quick research, through the usual channels, and it seems that although there had already been three successful Dick Tracy serials, put out by Republic in the 1930s, it wasn’t until 1945 that the first of four stand alone films came out, released by RKO who also made this movie. I don’t know why it took another five years before a feature movie was made of the Dick Tracy character but the two references in this movie makes me wonder if they weren’t maybe already courting the rights to the character at this point. If anybody knows if that was the case or whether these two references were purely in the spirit of contemporary pop culture references, then please leave the info in the comments section below this review.

And that’s all I’ve really got to say about The Saint Takes Over. George Sanders and Jonathan Hale are both absolutely brilliant in this and ably supported by the kind of top notch character actors and actresses you would expect in this Golden Age of Hollywood movie making. Another thoroughly entertaining entry in the series and both Sanders and Wendy Barrie would return for just one more picture in The Saint series of films before jumping ship with the similar series of films about The Falcon character (yeah, don’t worry, they’re all on the pile to watch and review once I’m done with The Saint). If you like The Saint movies then this is definitely a corker and it certainly captures the spirit of the novels, barring those slight but skillfully hidden concessions towards the central character (possibly due to censorship issues and the Hayes code?) and fans of The Saint should definitely enjoy this one.
Posted by NUTS4R2 at 12:09