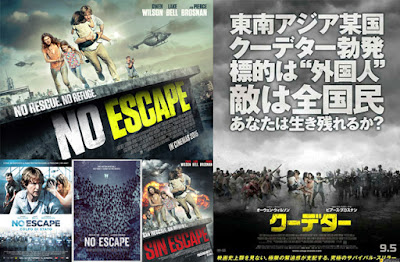 When I got kinda interested No Escape via the trailers for it at the cinema a month or so ago, I had no idea that this was the director whose last two movies, both horror films, I’d rated so highly - Devil (reviewed here) and As Above So Below (reviewed here). The reason I wanted to see this is because I’ve never been a big fan of Owen Wilson when he’s been involved with out and out comedy but I’ve always really enjoyed his performances in films where he's toned it down into a straighter or quirkier role, such as a fair few Wes Anderson movies like The Life Aquatic with Steve Zissou or his great turn in Woody Allen’s excellent Midnight In Paris (reviewed here). So I wanted to see what he could do in a straighter role and, to be honest, in a somewhat harrowing looking film about people under sustained threat.

And harrowing is right.

It’s not as disturbing as a lot of movies out there but, from something which has been pumped out of the Hollywood machine, I’d have to say that the film is pretty intense and ‘full on’ a lot of the time. Wilson, it has to be said, acquits himself wonderfully, carrying on playing his nice guy personae and staying with it as he and the family he has with him - a wife and two daughters - find themselves having to vacate their hotel and fleeing for their lives one day after moving to the Middle East for a new job... after the whole region rebels against Americans and are killing all foreigners on site... men, women and children... often in most brutal ways.

Another reason I wanted to see this was because Pierce Brosnan also has a good role in this and he’s playing somewhat against type. It’s a real eye opener for those of you who still close their eyes and see Brosnan as either of his suave Remington Steele or James Bond counterparts and, although the character does kind of go through to a certain kind of reveal you are expecting later on in the film, he really brings together a completely different kind of flavouring to the character than you would expect him to bring to the table here. This is Brosnan like you’ve not quite seen him before and he does a really great job here.

Now the story is, to be honest, filled with absolutely all of the clichés you would expect from it... there really are no surprises here and each twist and turn and roll of the dice that Owen Wilson and his family take to escape almost certain death or torture goes exactly like you think it would, even in terms of the sound design doing what you expect it too for some sequences. However, in this case it really doesn’t matter because the director’s constantly roaming camera, coupled with some very skilled editing and an ability to ramp up and sustain the tension and align your sympathies with the characters, despite the chaos you are being shown, is absolutely fantastically well done. It’s like looking at a well oiled machine of a movie which, in this case, means there are some moments in here you will find almost unbearable to watch for fear of what will happen to the people you have come to empathise with.

The actresses playing the two young daughters are pretty good too but the real standout of the show for me here was an actress I’d not seen in anything else before. Her name is Lake Bell and she plays Wilson’s wife and mother of their two daughters and, I think it’s probably fair to say that it’s a role you might at first overlook as being the clichéd stereotype it mostly is... but hold on, there’s more to it than that. While Bell plays a frightened mother, she mixes and balances that with the fact that, if you take a step back and look at the way the movie plays out... she’s actually one of the strongest characters I’ve seen in a while in a Hollywood movie and, although you might overlook it because Owen Wilson has a fair few scenes on his own, she’s actually the one holding things together and she sees a lot more action than Wilson... actually helping to save him from almost certain death in two sequences, which leaves her one up on him in the action stakes, I believe. She comes off really strong in this, mixing a kind of soft femininity with a deep survival instinct which kicks in and ensures she kicks backsides when she needs to, in order to keep her family surviving. It’s actually quite a feat and much credit to the writers for approaching her this way... and big cheers for Bell who plays it so well that she really sells it and, in many ways, becomes the least cardboard of the characters on screen.

So, yeah, all that and an interesting score by Marco Beltrami and Buck Sanders which, while getting buried in a few places, is full of interesting orchestration and really helps unsettle the audience in certain scenes, where the visuals alone might not necessarily kick up the tension to what it is when you hear the score against it. The movie has also got a nice little epilogue which, without giving too much away, kind of strengthens the less overt message which the whole film has been telling you all along... this is about a mother protecting her children and she is the part of the family who brings and maintains life.

The one thing which did make me sit up and take note at certain points is the enormous amount of montage sequences, both before and after the inhabitants of the region start going after American blood. Sometimes they cue you in on the current mood of the population and other times they help keep the tension going but the director seems to use a lot of them. The most interesting thing about the montage sections, though, is that they’re really not there to save time. The sections are rarely shorthand for hours passing because they are sampling through such small amounts of time... it just seems to be a way that this director seems to like to work. Although they did pop me out of the experience a few times, they don’t kill the atmosphere at all and they just about work when these sections come up throughout the course of the film. Perhaps a bit heavy handed but it’s not the kind of movie I would have expected this director to take on anyway so perhaps his background in horror has given him this approach as a solution to shooting kinds of things before. So... yeah, if it works for him then why not? I’m pretty sure he, like most people I should think, will learn more about what techniques are and aren’t working for him with every film he makes. Some directors really couldn’t have pulled this movie off and made it as suspenseful as he does, I’m sure... he’s delivered a well made product for the Hollywoodland factory, and he deserves a lot of recognition for this.

And that’s about it, I think. Short review for this one, I know, but there’s not a heck of a lot to say about No Escape other than it’s action packed, unbearably intense in places and has some great performances from the three leads to help pull you in to the point where you’re anxious about the characters every time they just take a few steps out into the open. I wouldn’t exactly class it as essential viewing by any means but, for what it is, you are in for a bit of a ride if you choose to go and see this thing at a cinema, where this kind of movie works best. I’d certainly recommend it if action, suspense and upholding family values are your thing... just be aware that, although it’s not all that graphic, it is quite suggestively brutal in certain scenes. And well done to Owen Wilson for choosing to be in a film of this nature... he does a really great job in it. And talking of Owen Wilson... isn’t it about time that MGM and EON Productions realised that the straw-headed Texan character of Felix Leiter in Ian Fleming’s James Bond books bears an uncanny resemblance in type and build to this actor? What about it people?