Doctor Who - The Witch's Familiar 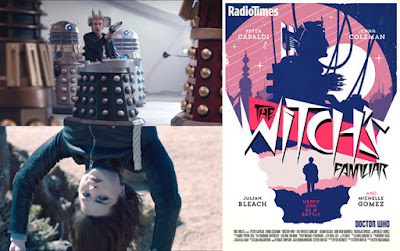 Warning: Yeah, yeah. Still spoilers in this one.

Okay so... I haven’t got a heck of a lot to say about this second episode of the latest series. There’s good and there’s bad but... really nothing to refute the astonishingly good work set up last week and I’m sure most people will be fairly happy with this one.

The episode doesn’t quite pick up from the cliff hanger ending of last week’s installment... instead pushing it firmly into the background until it can be similarly revisited to bring back exactly the same kind of dramatic flourish towards the end of this show, slightly weakened in that we now understand more what is really at stake and with the people behind the camera, presumably, hoping the audience has really short memories. This tactic seems to work out okay and I can’t make up my mind whether it was edited into the end of last weeks show, when they already had a viable cliffhanger of the seeming death of Clara, in order to balance up the running time or whether the story really was structured this way. Not too sure and it really doesn’t matter in the grand scheme of things, I guess. In modern day film precedents it’s the equivalent of the end of the second of Matt Damon’s Jason Bourne movies actually being placed chronologically towards the end of the third movie. Which can sometimes make things interesting.

In terms of the bad stuff I mentioned in this episode... bad being a euphemism for stuff I don’t personally like... there were two things which really bothered me here. One is Missy... who was really consistently well acted and well written throughout the episode except... the madness part of her character which I lamented at the end of the last series and which didn’t really bubble up to the surface last week, is back in a few scenes. I really don’t need to see her dancing around for no apparent reason with the Daleks... it just makes her seem overly dramatic for the sake of it. Still, I’m sure people will be into it. The other thing which bothers me is the apparent loss of The Doctor’s sonic screwdriver and its replacement with a set of sunglasses. Now, hold on. There’s a few things wrong with this decision... if, indeed, it’s not just a decision being used to tease the audience and stir up viewer reaction with the pay off being a new look screwdriver at the end of the year or next year... which can then be reproduced as a toy to generate more cash.

They’ve tried this idea before. The sonic screwdriver has been a staple of the show since it was first introduced in the mid-1960s in various Patrick Troughton episodes, beginning with Fury From The Deep. Jon Pertwee’s redesigned one was a very popular contraption and I could never work out, as a child, why they didn’t make a toy of it in the 1970s. Had to make my own. The device was scrapped in the 1980s, destroyed by a Terilieptil in the Peter Davison story The Visitation, if my memory isn’t failing me. I think the idea was that the screwdriver had become an almost omnipotent device to get the writers of the show out of any situation and... yeah, maybe they had a point. Or, you know, maybe the writers could just have been a little more clever with their writing... there’s always that option open to them, I guess.

The thing is, though... the screwdriver is as iconic an ingredient of Doctor Who as the TARDIS looking like a Police Box and the theme tune. Get rid of that and you lose one of the key recognition factors of a show which sometimes really needs that if the key cast member turn over is as high as it’s been, by design, over the years. The Americans presumably realised this too because the sonic screwdriver reappeared in the Doctor Who TV movie with Paul McGann and has been reunited with The Doctor, in one design or another, ever since. Until now... where they’ve replaced it with a pair of sunglasses.

There’s absolutely no need to do this and there’s especially no need if you’re going to take away what is, effectively, The Doctor’s magic wand and replace it with something completely different which does the same thing. This smacks of either tinkering needlessly with the things that work or, as I said earlier, aggressive fan baiting... so I shall watch the online reaction to this elimination of a key element with great interest as the weeks go by.

So that’s the bad stuff. The good stuff? Mostly everything else.

Not much here in terms of postmodernistic referencing to the past this week but there are some really great scenes between Davros and The Doctor which, if I’m not mistaken (but, hey, I probably am), are trying to hit exactly the same kind of emotional beats as the famous Batman/Joker ‘character analysis and shared joke scene’ which closes Alan Moore’s much loved Batman one-shot, The Killing Joke. Still, whatever its inspiration, it works pretty effectively and the added 'twist' that Davros is up to no good all along may seem pretty obvious, as does The Doctor’s knowledge of this... but it doesn’t make it any less effective and both Peter Capaldi and Julian Bleach do a fantastic job here.

As do Jenna Louise Coleman as Clara and Michelle Gomez as Missy... barring my caveat above. The comical chemistry between the two is pretty good and it’s quite well written. Not brilliant in some ways because you do always know what’s coming - Missy pushing Clara down a hole to test the length of the drop is beyond telegraphed in the dialogue, for instance - but this doesnt stop it being funny and the two seem to have an interesting dynamic between them.

As far as everything else in the story... it was sturdy. Nothing very “wow” but, again, nothing which let the side down in terms of the set up episode, as I was expecting it too... so pleasantly surprised there. This looks like an odd season we’ve got in store for us and I wonder just where show runner Steven Moffat wants to take us this time around. We’ve got to lose Clara at some point and, hopefully, restore Danny Pink to her to lend credibility to the Orson Pink timeline but... whether Clara will actually leave or whether she transforms into someone/something else, maybe a Dalek in Asylum Of The Daleks (reviewed here), is anybody’s guess. I also wonder about Missy (The Master) and the “tune out and you’ll miss it” comment that The Doctor gave a specific ring to her daughter... presumably a relation of The Doctor’s if he and Missy are... um... brothers. Time will tell, I guess.

And that’s as much as I can say about this one. Nice solid episode which didn’t have the wow factor of the opening episode but which concluded things in a way that it didn’t leave a bad taste in the mouth. Not a contender for a great episode as the first part was but... not a bad one either.