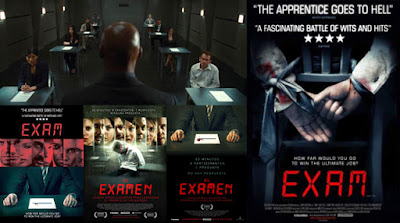 I’ve been wanting to catch up with Exam ever since my dad accidentally channel hopped onto an interview with Colin Salmon about it at the time of its cinema release. In the brief minute I saw before the next station was triggered on the remote controller’s cycling thumbs, Salmon (an actor I’ve always admired and thought should be heading up his own Hollywood action franchise) seemed really enthusiastic about this one and I could tell it was a movie with an intriguing enough set up that I would, at the very least, be interested in it until the end. However, I was unable to find any cinemas near me showing this at all and it kinda passed me by... but I didn’t quite forget about it.

Then, just recently, I was in my local Computer Exchange in Enfield Town and I came across a copy of the movie on Blu Ray for £2.50. I couldn’t wait to watch it. I’m really glad I got the opportunity because Exam is a pretty cool film, it turns out.

The set up is really interesting. Apart from a few very close up shots introducing each character over the opening credits, the whole film takes place in just a single set of one big room. Eight candidates are led into the room and each of them represents one of eight different racial, cultural or gender stereotypes. They are sat in two rows of desks and there is an armed security guard at the door. Colin Salmon enters. These are the final candidates for a job and this is the Exam which will whittle them down to one. Salmon tells them all ‘the rules’ and all the ways in which they can be disqualified and escorted out the door by the security guard, such as spoiling their paper or talking to said security guard. He then leaves, after setting a timer for 80 minutes... the film then proceeding in real time as the candidates turn their exam papers over and find them all... blank.

So that’s a neat set up, right? And that’s it as far as the candidates are concerned but, as an audience, you also have some other things to consider and figure out because, as the dialogue and rivalry continues, you begin to get a better picture of just what the world is like outside of that exam room. As it progresses, and without spoiling it too much, you begin to realise that the world outside is beginning to go through something fairly apocalyptic in nature and so there’s that to throw into the mix. There’s also the nature of the job the candidates have all applied for (or were head hunted for, in one case) and as the film continues you begin to discern that the events in the outside world which you never actually see... the whole film really does take place just in this one room... are in some way directly connected to the corporation which is looking to fill a fairly key position.

I love low budget movies and admire the fact that this one takes place all in one set. Smaller budgets somehow have a knack of bringing about more creativity to solve problems which other productions can just throw money at and it’s also where actors can best showcase their work and personalities, it seems to me. And this movie is no exception to that general rule. It’s a beautifully shot thing with the frame design using the lines and shapes of the interior of the room and highlighting the way different performers relate to each other in different planes and states of focus within that setting. It’s not something you’re going to get bored with in a hurry.

It’s also not something you’re going to find flagging in terms of performance either. All the actors in this are doing a great job and really, for the most part, getting a chance to shine and play off one another in some intense confrontations in that confined area. It’s some great work being done here, even by the ever silent security guard and, as things play out, it’s sometimes hard to figure out who are the good people and who are the villains in this little scenario... which is a good thing too. These are not black and white situations the people put themselves into in this movie... different aspects of their personalities come to light at different times and you have to admire, not just the performances, but the way the thing has been written. It’s obviously not dissimilar in intensity to other movies which take place with a group of actors in a confined space (I might mention Cube in this instance) but, as always, it’s powerful stuff and the writing really puts these performers in a headspace where they can all do some great work.

Also, the end almost took me a little by surprise, for once, in that my own personal response to Colin Salmon’s briefing at the start, turned out to be the right response but, because of the way it’s dressed up and muddied as the movie progresses, I’d eliminated it as the correct solution long before the ending came up. However, rather than be disappointed by this turn of events, I had to say well done to the writers and performers because it’s stylishly pulled off and, more importantly, leads to a very positive and morally uplifting conclusion to the movie... which is really not the tone I was expecting this film to be left in... a message of hope. You will probably find yourself happy with the final outcome and the candidate who gets the job, once you’re made aware of just what that job will entail and the mystery of just what the heck is going on is thrown into the light after the ‘exam’ is finished.

So... good job to all involved I would say. Exam was criminally neglected on its release... I’m assuming it must have played at some cinemas somewhere... and is very much a movie that deserves better recognition than it seems to have at the moment. A true modern classic with a lot to offer for the discerning cineaste... or even those regular, slobby movie watchers like myself. So definitely give this one some of your time, I would say. If you shop around at a few places right now you should be able to pick it up quite inexpensively and, if you do, believe me... it’s a bargain. Great little movie.
Posted by NUTS4R2 at 19:32