Doctor Who - Face The Raven 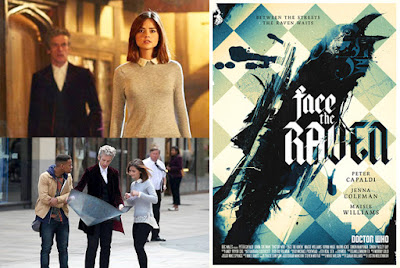 Warning: The big spoiler in here which you probably
already figured out was coming this week anyway.

Jovian Wade returns in this episode, reprising his role of Rigsy who we saw in last year’s Doctor Who story Flatline (reviewed here). He calls The Doctor on the TARDIS because he has woken up with a day’s memory loss and a tattoo on the back of his neck which is counting down. So The Doctor and Clara are on the case and after breaking the news to Rigsy, less than gently, that the tattoo is counting down in minutes until his death, the three look for the cause of this strange phenomenon and soon find a cul-de-sac street, hiding in plain site, into which it’s almost impossible to stumble on by accident. But Rigsy has been here before and sentenced to death by the person running the street, which is a safe haven for alien life forms seeking sanctuary.

Enter Ashildr, the girl who can’t die after The Doctor brought her back to life a number of weeks ago in the episode The Girl Who Died (reviewed here) and who continues to wreak a kind of havoc after the events of The Woman Who Lived (reviewed here), once more played by Maisie Williams. She is running the show and put Rigsy under a death sentence and it’s up to The Doctor, Clara and the victim to prove his innocence before the chronolock she has placed on Rigsy can lead a quantum shade, in the form of a raven, to take Rigsy’s life. However, the rules of this particular death sentence can be transferred to another host and Clara, unknown to The Doctor, transfers the death sentence to herself because she believes herself to be under Ashildr’s protection.

And all that might have worked too if the whole thing hadn’t been a ruse by Ashildr to trap The Doctor with a teleport band to keep her community safe from an enemy that has bargained for access to The Doctor. So by the end of the tale we have one dead companion, Clara, and a very angry and bitter Doctor who is teleported into, presumably, the hands of his unknown enemy. Meanwhile Rigsy, who was a graffiti artist if you can remember back to the events of last year’s Flatline, paints an homage to Clara on the exterior of the abandoned TARDIS.

Yeah, well this isn’t a terrible episode but it is a weak one. Certainly, though, a big improvement on last week’s which was, as far as I’m concerned, the only story which didn’t hold up, so far, in this current series. It was a bit flat in terms of texture and drama, perhaps, but certainly more deserving of being in this season, which has been one of the best since Tennant left the show (as much as I liked Matt Smith’s Doctor... the writing was all over the place).

There were certainly some very nice things about the episode. Clara has been getting more and more reckless and more and more entrenched in taking risks in The Doctor’s world, pretty much since the death of Danny Pink (which they really need to reverse if they’re going to make the timeline’s from last series make sense... or they’ve got a problem, as far as I can see) and this is further reenforced here to give us the idea that Clara will take unnecessary risks. And, of course, choosing to take on the chronolock is one risk too far. So all that was, and has been over the weeks, a nice touch with a good pay off. Also, the way in which the street was hidden in plain sight and the explanation of how you would seek out something like that was, although the episode was admittedly written by Sarah Dollard, something which was very reminiscent of what show runner Steven Moffat might have written, so you wonder how much he informed the writing on this one. I guess Dollard did a bang up job of keeping continuity with the style of what the show has become over the past few years... so that’s all good.

Now then, judging from my twitter timeline, there seemed to be a certain amount of surprise about her death (hang on, I’ll get to that death in a minute) of Clara Oswald. I thought everyone had figured out something like this was going to have to happen in order to make the last two episodes work dramatically in the way they need to... so I found the final scenes of Clara a bit of a disappointment, truth be told. Overly long and melodramatic for something which the audience, or most of us, was fully expecting. That could have been handled in a much more sudden and shocking manner, I thought.

That being said, and here we get to it, I have a hard time believing, as many people do, that this is the last we see of Clara Oswald this season. Admittedly, it is her final series but... I think she’ll be back for the last episode. Something makes it almost inevitable. And I really hope that when they bring Clara back for a little bit, they do so in a way that frees her and Danny Pink to continue on and have children who make the whole Orson Pink timeline possible... or I’m going to be a bit angry at the sloppy writing again. Also, people should try and remember that this isn’t the first time we’ve seen Clara Oswald killed. “Run, clever boy... and remember.” Remember that phrase, spoken from her lips the first two times her character died in Asylum Of The Daleks (reviewed here) and The Snowmen (reviewed here)? And remember how she jumped into The Doctor’s unearthed timeline on Trenzalore and proceeded to save his life anonymously and continuously... or put him on the right path in places...  throughout his many past lives in The Name Of The Doctor (reviewed here). I don’t think we’re quite done with Clara just yet... almost but, not quite. I don’t trust this death so much, after all the previous times.

Perhaps what fans should be more concerned with is who it is who has manipulated The Doctor to be trapped like this. Almost certainly The Timelords and Gallifrey will be returning in a week or two... and I am hoping against hope that Missy and The Daleks won’t be. That’s not a bet I’d take, though. I guess we’ll get to see where the 13 incarnations of The Doctor hid Gallifrey too (in the episode The Day Of The Doctor reviewed here)... I always assumed inside the TARDIS but maybe it’s in the ‘confession disc’ that The Doctor has been forced to hand over to Ashildr. Or maybe Clara, Missy, River Song, Timothy Dalton or even John Sim are in there somehow... don’t know, haven’t figured that one out yet. Either way... we shall see what we shall see. I don’t think we’ll find out for a couple of weeks, unless they reveal it right at the end of the next episode.

Meanwhile, Face The Raven was an okay chapter in the continuing saga. One of the weakest of the new series but it’s been a pretty good ride so far this year... I just hope the finale in two weeks time lives up to people’s expectations of the show. Meanwhile, next week we shall see what is supposed to be a completely solo episode starring only Peter Capaldi and the strange place where he has been teleported to... possibly in a bit of an introverted fashion. And you should be able to read my review a day or two after.
Posted by NUTS4R2 at 11:40