Doctor Who - The Zygon Invasion 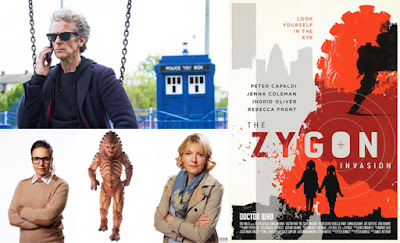 Well alright then, this is probably the weakest in terms of ideas and intrigue in the current series of Doctor Who so far this season but, even so, I have to say that this was a pretty fun and highly entertaining romp.

Now, the problem with doing stories of this nature, involving the underused, possibly about to be overused, titular creatures, in only their third appearance since their debut opposite Tom  Baker in the 1970s... is that they’re probably underused for a reason. That reason being that you’re always going to get a version of a story which bares at least some resemblance to the science fiction classic, Jack Finney’s Invasion Of The Bodysnatchers, in one form or another.

So, unfortunately, no matter how twisty and turny things get in these kinds of stories, you never really particularly care about what strange antics any of the usual friendly faces are getting up to becaue you know that any moment one of them could turn out to be a Zygon disguising itself as your ally. This makes for dull viewing in terms of getting hooked on the storyline because, frankly, the writers have always got a safety net to revert to if one of your favourite characters get killed... one such character in this instance, of course, being the character of Osgood.

Now, we already saw Osgood killed by Missy in the conclusion of last year’s series, Death In Heaven (reviewed by me here) and at the time I said there’s always the chance that the dead Osgood could be a Zygon. That, of course, is because of the absolutely massive plot thread left loose and dangling from the 50th anniversary special from a couple of years ago, The Day Of The Doctor (reviewed by me here), which also included a half heartedly unresolved Zygon story as a sub-plot and which also featured the very first appearance of Peter Capaldi as The Doctor, as it happened, in a brief cameo of the future incarnation of the character. Producer Steven Moffatt has obviously decided to go back to the story and resolve one of the two dangling plot threads and, as it happens, I’m pretty sure the other thread from that special episode will also be revisited sometime this series too... although possibly not in this story. We even had a little recap of The Day Of The Doctor at the start of this episode to remind us how things had been left, to an extent.

All that being said, however, the more into this episode I got, the more I believed it was the human version of Osgood who got killed back in Death In Heaven... although I’m not really sure anymore and I’ve kinda stopped caring because the writers can now just play the ‘I’m a Zygon’ card whenever they want. And, I have to say, they do play it quite a lot in this episode.

Doesn’t matter though because there are some nice character moments in here and the episode moves along at quite a pace. There’s some great acting from all involved and the dialogue of the way the characters interact is... yeah, it’s quite impressive. There’s absolutely nothing to tax your brain in this one but the writers still manage to make it interesting, in spite of the tired old doubles plot... done so well in four movie versions of Invasion Of The Bodysnatchers and, alas, a little less well but perfectly competently here. There are also some interesting musical moments from composer Murray Gold including an action orchestrated version of The Doctor’s A Good Man sub theme and a strangley poppy version of Clara’s theme which... I’m not sure about, to be honest.

We have a fast paced and, very much, a globe hopping episode here with the story cross-cutting between The Doctor (or possibly his double) in one location, Clara (certainly her double) in London and Kate Stewart, the Brigadier’s daughter, in a third location. And it’s all very exciting and dynamic enough to keep one distracted from the inadequacies of the plot. There’s some bad stuff too, of course...

Three big things for me that let the episode down as much as its reliance on the shape shifting abilities of the Zygons were the reappearance, once again, of The Doctor’s sonic sunglasses, yet another guitar playing scene with The Doctor plucking away at his instrument (not again, kill me now) and, unfortunately, a cliffhanger ending which really doesn’t have much sting or audience investment because... hey... how do we know that the character we’ve been following as The Doctor wasn’t a Zygon for the majority of the episode anyway. They’ve already said there are good Zygons and a splinter group, so how do we know the only people in danger at the end of the story we care about aren’t all just Zygons anyway. It’s an audacious try for a cliffhanger but... it really doesn’t work.

So that’s my review of this episode sorted, I think. The Zygon Invasion is the weakest of the new series so far but still head and shoulders above the majority of the post-Tennant era and it does have its moments. Alas, because I have important things afoot next weekend, I won’t be able to see the concluding part of this story until, quite probably, two days after it is broadcast... so I don’t know where this one is going yet but I suspect it won’t leave everything as cut and dried for the main characters as many might hope. I won’t know if I’m right about that until the Monday though so... yeah, I’ll catch up on the review as soon as I am able to after that. So there will be two more reviews this week and then a gap of a few days before the next post after those. So please, join me here, if you can, for my take on the concluding part of this story. Hopefuly there will be a little more to think about after the next one.
Posted by NUTS4R2 at 09:49