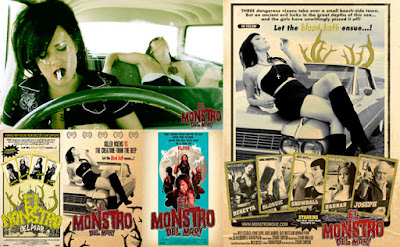 Oh good grief. You know, I first came across Monstro! as an “other customers have bought” recommendation on Amazon and it haunted me for about a week before I decided to buy this... plus one other from the same company (a decision I realise I’ll now possibly regret) at a fairly low price. After all, with a good looking, chesty babe on the cover and the explanatory tag line “Killer Vixens VS The Creature From The Deep”, how can you possibly go wrong? Well the answer to that question must be somewhere because, in all honesty, Monstro! is a truly terrible film.

And when I say it’s a terrible film I don’t mean that the film is so terrible that it becomes ironically entertaining and something to be held up and cherished and loved for its utter stupidity. That’s the kind of film I was kinda hoping I’d be buying... no, this is just downright hard to watch. I bought this because the title and carefully distilled plot description (see paragraph above) made me assume it was a loving homage to a specific grindhouse style of movie making which has regained a certain amount of popularity of late with films like Machete (reviewed here), Machete Kills (reviewed here) Planet Terror, Hobo With A Shotgun (reviewed here), Nude Nuns With Big Guns (reviewed here) and Nurse 3D (reviewed here)... and I guess, in all honesty, it certainly is. There’s got to be a lot of love for this kind of movie in the hearts of the writer and director, at least I would have thought so... and I’m sure all of the crew, actors and actresses are trying to help reach that same, singular vision.

It’s just a bit of a problem when it kind of misses its mark so often... even with its tongue wedged firmly in its cinematic cheek so to speak (assuming this film did actually get some kind of general cinematic release outside of the festival circuit... I’m not convinced) and it’s a shame because the main premise, as mentioned above, is something that could have been realised in the most outrageously stupid but fun way possible. But, to be fair, the film does at least try hard to deliver.

The movie starts off in black and white to bring it closer to the style of the obvious homage to Russ Meyer’s Faster Pussycat! Kill! Kill! that the main leads are so obviously trying to channel (reviewed here). Nelli Scarlet plays Beretta, the obvious Tura Satana stand in for the movie and, to be fair, she looks absolutely stunning. She is hanging out in her ‘broken down’ car with her posse consisting of Karli Madden as Blondie and Kate Watts as Snowball. When two men pull over to fix the car, the girls sweet talk them for a bit before slitting their throats and stealing their possessions. They then go to a lock up on some beach in Australia which they’ve kinda inherited (through their murderous ways) but the cranky old, wheelchair bound Joseph, played by Norman Yemm and his clichéd, all vices repressed, twenty something granddaughter Hannah (played by Kyrie Capri) are people they may have to deal with and... why is everybody telling them to beware of the beach?

Well... because there’s a giant sea monster thing who was last there around 20 years ago, of course. As luck would have it, too, it just so happens that it picks now to reappear and start killing people again. When the girls take a hit and one of them dies, it’s up to the four remaining survivors to fend off the sea monster with any weapons at hand.

Now, really, that sounds like just the kind of B-movie I would really want to watch but... it’s just not very good. As I said, the film begins in black and white to move it closer to the Meyer homage as a starting point and as soon as the first person’s throat is slit, it turns into a colour movie. Even that idea is pretty neat... perhaps a bit clichéd now but, something that should be kinda cool. The trouble is, everything looks just a little too low budget and it rarely quite works. It’s a gory film, for sure, with huge amounts of violent death and that’s usually a sure way to at least place it into the realms of exploitation cinema that’s halfway worth watching... but it just looks somehow unsatisfying. The director certainly seems to have a fetishistic obsession with showing as many dismembered hands and limbs in the aftermath of an attack as possible... which I thought kind of odd after a while. Perhaps combining this amount of viscera and torn human flesh with scenes of various of the girls in states of undress might have just notched it up into the “watch it at least once” category for me but alas, and much to my surprise for an 18 rated movie... there’s no nudity in Monstro! either.

So basically the film just rambles on, mostly in static framed shots combined with the odd moving camera footage which doesn’t capture a whole lot of motion or range, it seemed to me. The most shots where any kind of scope of movement plays out is when the camera is shot from another car but, even in the sequences I’m remembering now, the main focus was kept in the centre of the screen so the movement is actually little or none, relative to the speed of the subject. Which was quite possibly an artistic decision rather than one made from any kind of budgetary or technical concern but... it just didn’t work for me here either, to be honest.

Another strange thing is that the period this film is set in is quite hard to pin down. The director, a few times, shows the girls using a cassette player of some sort, including a car casette deck, which I guess would date this film to being set in the 1970s or 1980s. Then, later on, it’s all cool for one of the girls to whip out their modern mobile phone and try and use that. Now, okay, this technique of deliberately shooting films out of period is nothing new, certainly. Films like the early Universal Horror cycle of the 1930s and 1940s, for instance, used different technologies mingled together anachronistically so you couldn’t tell which period the movies were actually supposed to be set in (as a way of trying to pre-empt any future continuity errors, I would guess) and another famous use of this technique can be seen in Tim Burton’s two Batman movies. Here though... it seemed like I was spending as much of my time trying to figure out why the heck the girls were using things like tape decks as I was trying to figure out why very few people in this film seem to be doing very much actual acting. Is it the script which is, admittedly, not top notch or is it that just nobody in here could actually act? About the only one who was halfway decent of the main leads was Nelli Scarlet as Beretta, if looked at in a kind of retro kitsch way but... ahh, I was having difficulty getting through this one, I can tell you.

The, presumably practical, special effects aren’t all that great either. Passable in a few places but I remember noticing that, in one scene where the sea monster attacks a load of fishermen, it was looking a bit shoddily executed and I noticed the filmmakers had plumped for rapidly crosscutting this scene with a scene of the girls partying in, I presume, a desperate attempt to distract from certain technical shortcomings during this sequence. The constant establishing shots of either a slowed down or sped up shot of waves breaking against the beach throughout the film didn’t do much to impress me either and the score and song-track, while possibly evocative of the film that the people responsible for Monstro! wanted to make, didn’t really do this one any favours either and I’m afraid it all left me a bit cold.

So there you have it. As a lover of cheap, z-grade exploitation movies I found practically nothing good in Monstro!, apart from my admiration of the ‘look’ of the way the leading ladies were made and dressed up. Over and over again the movie struck me as being too lacking with its budget and not over the top enough in a good many of the sex and violence scenes that are the currency of a good exploitation movie. What we’re left with here, sadly, is a truly great idea for a film but with a shoot that didn’t allow that film to actually come out and play in front of the camera in a way that really works. Not a film I could recommend to any of my friends who would normally like this kind of movie... ultimately it was just a bit dull and lifeless and that tag line, Killer Vixens VS The Creature From The Deep, while true in actual footage, is not true in spirit to the imagery the mind might conjure up when one reads it. Still... at least it has a coherent narrative, which is better than one other movie I saw this year.