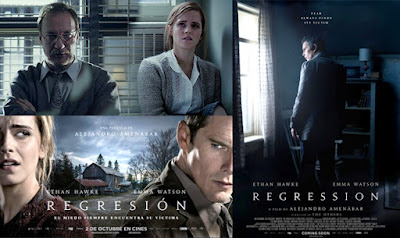 Gone With The Mind

Warning: Yeah, spoilers all over this review.

I wanted to see this movie because I trust the lead actor, Ethan Hawke, to make interesting choices when it comes down to films to star in and the premise of this one looked kinda interesting. I eventually ended up in the Empire cinema in Leicester Square but, it turns out, in the smallest screen possible. For the outrageous price of a tenner, I was watching the movie in a screen which only contained 23 seats, divided unevenly between three rows. I guess the manager made the right choice of screen size for this film though because, despite the fact that there really shouldn’t be any screens this size outside of someone’s living room (you definitely shouldn’t be charging more than 50p for the privilege in that kind of tight squeeze environment), I was the only person in that screen watching the film on a Saturday afternoon. I’m guessing Regression won’t be breaking box office records anytime soon.

I’ve only seen one other movie by Alejandro Amenábar and that was The Others... which disappointed me big time when it was released into cinemas because it had a so-called twist ending which I'd found pretty obvious. The one thing I took away from the experience was that the director had composed his own score, which wasn’t a bad one. Other than that, despite some good performances and atmospheres, that film left me kinda cold.

However, because of this experience, I was primed for Regression to have some kind of twist ending and so, as I watched the story unfold, my mind was turning to find out what was going on but... as the film progressed to the end of its running time, I began to realise that, not only wasn’t there any kind of twist to the film, there really wasn’t even anything actually happening at all. So if you don’t want the ending of this film spoiled... don’t read the next couple of paragraphs.

This film is purported to be based on real life events which, having watched it now, I can fully believe... given the lack of anything actually occurring. It also claims to be about a devil worshipping cult which is turning families against themselves and causing, in this particular case, a man to abuse his daughter, played by Emma Watson. It’s up to the main police detective protagonist Ethan Hawke to protect the girl and get to the bottom of the truth of the devil worshipping cult versus a case of child abuse... aided by the equally watchable David Thewlis as a psychiatrist who specialises in hypnotic regression, whom Hawke calls in to help with the investigation. All three of these, plus their supporting cast, are turning in nicely sound performances but, I felt, both the story and the shot design lets them down big time.

The truth is... not only is there no devil worshipping cult... there’s no actual crime either. It’s all just hysteria created by outside influences on the mind and, as possibly hinted, false memories created by the hypnotic regression sessions intended to find the truth. So, despite the fact that there are some reasonable attempts at scary sequences where Hawke believes he is possibly being drugged and forced to take part in demonic rituals involving the slaughter and consumption of babies... it’s actually him just having nightmares and there’s really nothing much going on. So I guess, in some way, there is actually a twist ending to the movie... in that there’s just “nothing to see here... move along”.

To be fair, the actors do their best to capture the tensions and signs of hysteria that they are all thinking themselves into and you could say that there’s a parallel somewhere in this movie for the ‘Salem Witch Trials... or at least the version of them popularised by Arthur Miller in his play The Crucible. It just feels like by the end of the movie, metaphorically, everybody’s been dying to see what’s in an attractively decorated paper bag and, when someone opens it, they find the bag is completely empty, which explains why the bag is light enough to be able to fly around from one direction to another as any particular breeze takes it... there’s just not enough weight in it to keep it anchored. And in that analogy... the bag is the storyline. Which is a shame because, when you get a group of actors such as these, it almost feels like its a waste of their time to have participated in this one. Not a popular thing to say, to be sure, but this movie did leave me disappointed and less than entertained.

The editing combined with the camera work seemed a little less than remarkable too. There were some tracking shots and examples of moving camera but I did notice that this film did seem to be more comprised of static (or almost static) camera set ups which would play out for a few seconds before cutting to another shot and then returning to roughly the same angle as the first... but at a slightly different zoom or distance from the camera. There wasn’t as much use of master shots and moving the camera through them as I would have expected, to be honest, and the way in which various scenes were treated was obviously enough for my conscious mind to take note... the dullness of the shooting style did bring me out of the movie a bit, I think.

And that’s all I’ve got to say about Regression. It’s a film which seems to be mostly about performance in terms of having anything good going for it. The score by Roque Banos is okay and appropriate to the images but it didn’t strike me in the same special way that this composer’s Herrmannesque scores for The Machinist or The Oxford Murders (reviewed here) did, to be honest. It might be that it stands up better away from the film but I need to hear some album samples from this one, I think, before I’ll commit to a purchase. All in all, though, it’s not a film I’d recommend to any of my friends and certainly not one I’d bother to repeat watch anytime soon. If you want to go see a twisty turny horror film then I’d advise against this one because it just goes nowhere, ultimately and, even the journey to the ending, which is often as important, is less than interesting. Hardcore fans of the actors and actresses involved in this film may get something out of it but, honestly, it’s nothing special.
Posted by NUTS4R2 at 19:24