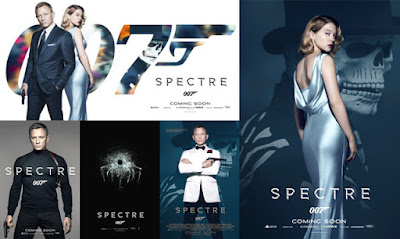 Regular readers of my column and, in particular, my many Bond movie reviews, will know that I really don’t rate the Daniel Craig Bond films all that much. I’ve gone on record in saying that they’re at least better than some of the worst of the Roger Moore era films (my least favourite Bond) but they’re not that far apart from them and they inhabit the lower end of my Bond rankings alongside such terrible Bond movies as Octopussy, Licence To Kill and Die Another Day. That being said, I don’t want you to think I don’t rate Daniel Craig. I think he’s a pretty cool actor, actually... I just think the version of Bond he’s been asked to play - the unsophisticated, everyman’s 007 thug - is not necessarily the right way to go and anyone who's read the original Ian Fleming novels will see a big difference in the character as it's portrayed here. Perhaps, bearing in mind the dubious nature of the character in the first place, a more honest approach but... not necessarily a good role model to have. He is extremely popular however and, I’m sure, this movie will be much loved by fans of this era.

Now S.P.E.C.T.R.E didn’t appear in more than maybe two of Ian Fleming’s later Bond novels. The Bond villain organisation of choice in the majority of the Bond books were the real life organisation known as Smersh (an amalgam of two Russian words meaning “death to spies”). When Doctor No and the early Bond films were made, Smersh was changed to S.P.E.C.T.R.E, I seem to remember, although my memory may be failing me... because the producers didn’t want to offend the Russians. Consequently, when the movie From Russia With Love came out, although Smersh does get a mention (it even gets a mention in the first Flint movie), it’s all about S.P.E.C.T.R.E again and this carried on and was eventually taken up by Fleming in the novels himself, after he based his own novel Thunderball on the script he was developing for the movie with Kevin McClory (again, if memory serves).

So fans of the books always felt kinda cheated when the movies used S.P.E.C.T.R.E as the bad guys... we all knew who the real villains were and the films seemed to be somewhat compromised in their intent before they were even out of the starting block. I remember sitting in a cinema in Llandudno on my summer holiday in 1987 and breathing a sigh of relief when one of the villains in The Living Daylights sent down the “death to spies” message to one of Bond’s colleagues before killing him... Smersh were finally back.

But now, it seems, Smersh have had their day once more and we get the original film version of the organisation not only returning as the title of this latest Bond movie but, also, tying into the storyline from the previous three Daniel Craig films, which are all fully referenced in this movie (along with a few other little nods to Bond over the years). And, of course, with the return of the movie organisation we have the return of one of the main villains of the Bond novels and films... although I think the writers were kind of trying to keep that a surprise. Honestly though, I think pretty much everyone who was interested in this movie, however, figured that out from the word go so... yeah, we have the always excellent Christoph Waltz playing Blofeld.. an exceptional choice of an exceptional actor for an exceptionally Bond fan pleasing role.

We also have some excellent actors and actresses cast alongside him such as Monica Bellucci, Léa Seydoux, Ben Whishaw (continuing as Q), Andrew Scott (Moriarty in the modern TV incarnation of Sherlock), David Bautista, Naomie Harris (continuing as Moneypenny), Jesper Christensen (returning as Mr. White) and Ralph Fiennes (continuing as M). And everyone is excellent in it. They’re all good, every last one of them... but I couldn’t help but think that both the script and the action choreography let them down a bit on this one.

Bellucci, for instance, is totally wasted. She is, and always has been, a phenomenal screen presence but she really is in the movie for a very short time in, I believe, only two scenes (unless you count the time split in one scene as the opening of a third). Waltz is excellent but the dialogue really isn’t up to scratch, I felt. He always delivers it so well and does some really interesting things with his acting but... you need to really give him special lines to work with like Tarantino did on two occasions (to date). And why the writers insist on treating the revelation of Ernst Stavro Blofeld as some kind of reveal is beyond me. Like I said, we all knew this before they’d even started shooting the thing. Andrew Scott is cool but he’s also got an element to his character which is written like it's supposed to be some kind of twist... you will see everything coming, as far as his character goes, pretty much from his first scene in the movie... which is kind of a shame but the storyline even makes it almost impossible for his character’s personal revelation not to be the case as it basically resolves a dramatic problem the writers put in the way of the main protagonists right from the start of the picture. So it’s all a bit of a shame, truth be told.

Now there are some very good things about this particular installment in the Bond franchise. The opening sequence is pretty good... although the lack of ‘racoon eyes’ completely spoils a character reveal... not to mention continuity in all the shots leading up to this, in much the same way that we all thought it was a ridiculous choice to make when Michael Keaton has exactly the same thing happen to him when he pulls his mask off in Batman Returns. Seriously? Movie makers really should start realising that we’re not all completely stupid. You’ll know what I’m talking about it when you see it and if you’re anything like me it’ll pop you right out of the movie. But yeah, other than this and some improbable helicopter shots not matching, the pre-credits sequence is probably one of the strongest things about this movie. A big shout out to David Bautista too, playing one of the most tough and relentless Bond henchmen in the history of the series and, if you’re paying attention, doing it in such a way that the character, alongside another of the main villains, can easily be brought back for another movie if so desired.

Thomas Newman’s score is pretty good in places too... a lot better and more obviously Bondian, I thought, than some of the stuff in the previous movie Skyfall... although during some of the action sequences it does get totally lost in the sound mix, if truth be told. Either way, it’s a lot better than the horrible non-Bond song the producers saw fit to include during the title sequence. I thought the title song for Skyfall was bad enough but this one... well... I guess the writer couldn’t think of anything to rhyme with S.P.E.C.T.R.E and, you know, also forgot to put a strong melody line in it.

Okay... I so I didn’t have high expectations for this movie from the start but I was kind of buoyed up from the strength of the opening sequence. Alas, it didn’t take long before I was looking at my watch trying to work out when the movie would end again, I’m afraid. There were more bad things than good in this movie, I reckon. For instance... the title sequence was really not that great. It didn’t help that it had the aforementioned song playing over it but it did, at least, have a few classically surreal moments that looked like they belonged in a Bond movie credits piece, for sure... but not many, I’d hasten to add.

Another thing is that the action sequences seemed, for the most part, just astonishingly dull for a lot of the movie and, worse, seemed to be getting less interesting as the movie wore on. The editing on them was fine... this is no Quantum of Solace, I’m pleased to say, but I did find myself rather bored through most of these scenes and, the one scene which looked like it would have all the main good guy protagonists storming British intelligence and getting into a big battle, alas, didn’t quite get there. It all seemed just a bit anticlimactic in the end and I really couldn’t get into the spirit of the movie, by the final reel. Add to this a main protagonist who completely relies on his gadgets to get him out of trouble in this one, especially, rather than his own cunning, plus a highly predictable story line and... well... it just wasn’t happening for me, I’m afraid.

Ultimately, this is a big looking Bond film which I’m pretty sure the majority of modern audiences will really get into... however, I don’t think I’m that audience anymore and this really isn’t my Bond. At least they saw fit to resurrect the iconic gun barrel opening shot this time although, bizarrely, they seemed to have forgotten just how to use it to get you into the next scene like the majority of Bond films have easily have managed to do in the history of the franchise. Oh well, I’ll keep my hopes alive that the next movie in the series can breath some life back into the franchise. And as far as S.P.E.C.T.R.E goes... well at least it didn’t have an invisible car in this one.

Dr. No
From Russia With Love
Goldfinger
Thunderball
You Only Live Twice
On Her Majesty’s Secret Service
Diamonds Are Forever
Live And Let Die
The Man With The Golden Gun
The Spy Who Loved Me
Moonraker
For Your Eyes Only
Octopussy
A View To A Kill
The LIving Daylights
Licence To Kill
GoldenEye
Tomorrow Never Dies
The World Is Not Enough
Die Another Day
Casino Royale
Quantum Of Solace
Skyfall
S.P.E.C.T.R.E