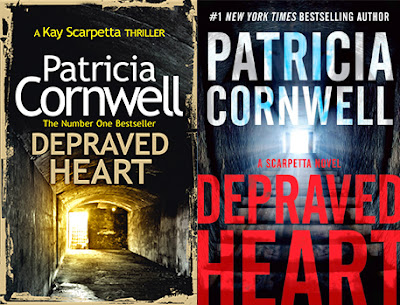 ‘til Death Do Us Heart

Okay then... another Christmas day, another of Patricia Cornwell’s Kay Scarpetta thrillers, Depraved Heart. Except... not quite. Long term readers will be familiar with my annual tradition of starting the new Cornwell book on Christmas day but this year, due to unforseen circumstances, I actually had to start reading this four days later than usual... so this is actually the second book that I read after Christmas day.

It’s been a while since I was actually critical of Cornwell. I’ve always loved her work but remember a few years, just before I started up this blog, in fact, where I had trouble with her writing on a few of her books. I don’t know what or why the problem occurred, and it’s possibly just my perception of them at the time, maybe. However, for a while now, Cornwell and her central protagonist, Dr. Kay Scarpetta, have been back in top, crisp form and this new novel is no exception. It’s a real humdinger of a page turner for sure and I was completely captured right from the get go. That being said... I have one general criticism of this particular tome but... I think I’ll address that at the end of this review.

Depraved Heart is exceptional storytelling. Following on from the previous novel, Flesh And Blood, Cornwell takes the unusual tactic of setting the next book fairly close in terms of time to the events of that last novel. Quite often the characters will have moved on for a year or more but it does kind of make a certain sense, if you remember the events of the last one, that we should be plunged back into the circumstances of that story and, although this is set only two months since the last chapter of Flesh And Blood, I was personally hoping that it would be set within five minutes of that last chapter.

Instead, we are plunged immediately into what seems to be a new investigation, with Kay Scarpetta once more telling the story in first person present tense as the events of the day in which all but the last chapter takes place, once again unfold. As things happen, so we are filled in about events that occurred after the end of the previous story but, straight away, Cornwell begins to keep us on the edge of our seats as, right from the outset, a new element is introduced which immediately rings alarm bells and which also takes the action back to the 1990s, returning to the events surrounding things which were happening in the Scarpetta stories written at that time. Once again, the book involves one of Scarpetta’s old enemies, still presumed dead by the FBI due to some stuff I’m not going to spoil for you here and, right away, you will be feeling the danger lurking in the pages. Of course, now Cornwell is back to writing the books in the present tense, the suspense is palpable because anything, literally anything, could happen and with Cornwell’s early track record for killing off characters... it basically means you will be fearing for all your favourite supporting cast right from the first chapter.

Cornwell also does a thing which she’s been doing for a while now and that is to compress short bursts of time into very long sequences and expanding them out... almost like she’s viewing the events in slow motion. For example, a very disturbing cell phone video which Scarpetta watches while also trying to do her job, goes on for several chapters and almost 50 pages... even though the running time of the video is only about 20 mins. Not that it’s in any way dull because, as little bits of alarming information are spoon fed to the reader about the contents of the video, we are also worried about Scarpetta as she simultaneously tries to work a crime scene without putting herself in any legally questionable situations and, obviously, in any situation which means that death may be visited on her or any of her friends and colleagues at any point in the narrative. And Cornwell, being probably the worlds number one living writer of crime fiction, in my humble opinion, milks the content for all it’s worth and ratchets up the suspense paragraph by paragraph, word by word.

Fans of Benton, Marino, Lucy Farinelli (always my favourite), Lucy’s girlfriend Janet and various other periphery characters will be constantly fearful for both the lives and possible incarceration of some of them by a compromised and possibly criminal investigation undertaken by the FBI. And, of course, the anxiety surrounding the main manipulator of the piece, arch enemy Carrie Grethen, and the fall out from not just the last book but, possibly, a great many years of the various characters’ fictional careers. Which means fans of Cornwell's work will be lapping it up, just like me, and whizzing through the words to the end of the book as fast as possible. It’s hugely entertaining and, as the twists and turns get morbidly darker, you wonder just how the ending could possibly bring any shades of light with it...

Well, it’s an ending I’m certainly not going to spoil for anyone here but I will reveal my one criticism of the book and it’s this. In the last one, Cornwell did a very unusual thing for her. She ended the novel on a one word cliff hanger, a four letter case of onomatopoeia which immediately raises a big question of what lethal thing has just happened. Did somebody close to Scarpetta, even Scarpetta herself, just die? Well, she neatly sidesteps and distracts the reader all the way through this one by using the flashback structure in a way that you get so involved in the current story that, pretty soon, you forget the cliffhanger ending of the last one. However, unless I completely misinterpreted the ending of Flesh And Blood or missed something obvious in Depraved Heart, she never once addresses just what the heck happened at the end of that last book. So I’m kind of at a loss to try and figure out what occurred at that point in the narrative, to be honest. And it seems I'm not the only reader who has had this problem with this novel.

That aside, though, Depraved Heart is an absolutely fantastic thriller in the writer’s inimitable style and, you never know, we might well get the answer to that last cliff hanger coming to light in a future novel in the series. If that happens, I’m personally hoping it will be the next one but, who knows.... we shall have to wait and see. All I know is that I can’t wait for next Christmas to see what Scarpetta and the gang are up to next. Definitely a must read for fans of the character but, be warned, don’t read this one out of sequence before any of the previous novels.
Posted by NUTS4R2 at 19:08