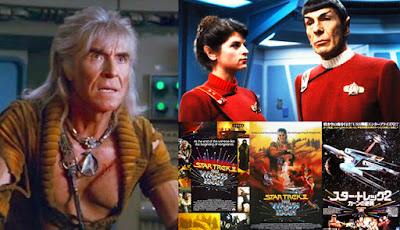 Khan But Not Forgotten

Warning: Some spoilers, I guess.

Okay. So the first sequel to Star Trek The Motion Picture was also a sequel to the original series’ first season episode Space Seed, which starred Ricardo Montalban as Khan, the leader of a group of super-intelligent, genetically enhanced people up to no good. At the end of that week's exciting adventure, Khan and his gang of super soldiers had been marooned on a planet which, in the intervening 15 years between that episode and this movie sequel (in both real time and story time) had shifted orbit and become almost unlivable, killing the majority of Khan’s people, including the love of his life.

That’s the set up and the plot is one of revenge, of course, in the film which really brought the Star Trek franchise back in a big way, after the success of the previous adventure (reviewed here). I think this one was generally well received by most people at the time and it made a huge profit, partially because the cost was around a quarter of the previous film... although to look at it you might assume it had a larger budget than the previous one.

This is the one that brings all the action back into the mix, although a lot of the action is from William Shatner’s Kirk going viewscreen to viewscreen, ship to ship, with the titular villain of the piece. It’s basically a science fiction version of Hornblower with phasers and photon torpedos replacing the ships cannon’s trading shots across the water and it works pretty well. It’s fairly violent and less toned down in terms of grimness than you might expect from something which is generally perceived to be part of a family franchise and I believe both this movie and Ridley Scott’s Blade Runner (reviewed here) ran into some problems with the American board of censors at the time. Both of those films suffered from enforced cuts, from what I remember (or the choice to cut down or go with a higher rating... which, frankly, amounts to the same thing in my book) and were released in cinemas in significantly compromised versions.

That being said, I also remember reading the fairly fleshed out novelisation by science fiction writer Vonda N. McIntyre at the time and marvelling at just how overly dark and bloody the novel was in comparison to the movie. The pages were pretty much running red with scarlet ooze in terms of scenes where, for example, characters are strung upside down and interrogated while having their throats cut, if I remember correctly (cut me some slack here... it was 32 years ago since I read it) and although the aftermath of scenes like these turn up in the movie, it was the novelisation that portrayed these actual scenes in all their violent glory. Whether any of these scenes were actually shot for the film or not is something I don’t know about.

What I do know is that it’s a pretty entertaining slice of Star Trek we have here. Most of the regular actors are back... William Shatner, Leonard Nimoy, Nichelle Nichols, DeForest Kelly, James Doohan and George Takei are all present and correct and we also have a nicely expanded role for Walter Koenig as Chekov... he being the person who discovers Khan on the planet’s surface. Kind of an irritating point for fans of the show when you realise Walter Koenig was never in Season One of Star Trek and therefore technically never met Khan... but that doesn’t really matter here and Koenig does a damn fine job of the material he’s given to work with.

There’s lots of action, some very witty dialogue and although the shot set ups are not really anything to write home about, the way they are edited into a tight and fast paced movie, for the most part, is pretty good. Unlike Robert Wise in the last movie, Meyer doesn’t waste time with his effects shots... directors were finally beginning to treat the post Star Wars effects industry in a way that was less reverent to the actual on screen effect (just as George Lucas had done right from the get go)... which of course made the impact of the effects in the context of the action all the more potent.

And, of course, you had the death of Spock...

Yep. Everyone knew that Spock was going to get killed in this one, way before the movie was released. Leonard Nimoy’s first autobiographical book was famously called I Am Not Spock and it was quite a few years after this movie that his more upbeat titled sequel memoir, I Am Spock, was released into the world. Meyer uses the expectations of Spock’s death in the opening Kobayashi Maru scene, a no-win scenario training test for Starfleet cadets introduced in this film (with many mentions in movies and TV spin offs for years to come) and Spock, along with most of the regulars, are ‘fake killed’ in the opening sequence. This was presumably an attempt to try and have Spock’s real death at the end of the story be a bit of a surprise to some people... but it was perhaps too famously publicised for most of us not to expect it. His ending here is dramatic, moving and it was somewhat parodied a couple of years ago in a reverse version of the same scene in Star Trek: Into Darkness, which also had Khan as the villain... this time played by Benedict Cumberbatch (my review of that one here). We all had tears in our eyes when Spock met his end back in 1982 though.

However, the sharp eyed among us remembered a little non-sequitur moment that the writers put in and, of course, it wasn’t too much to expect that this movie wouldn’t be the last we heard from Spock. Of course, we’d have to wait a couple of years to find out for sure.

The music for this movie is one of James Horner’s greatest but I pretty much ignored it when it first came out. The memory and power of Jerry Goldsmith’s score for Star Trek The Motion Picture was what I was waiting for and that score is not referenced or tracked in here at all. So I was kind of resentful of somebody else writing the music for this one at the time. I didn’t really discover Horner until ALIENS in 1986, by which time all his truly great scores such as Battle Beyond The Stars, Humanoids From The Deep, Gorky Park and Wolfen were in his past. However, it’s one of Horner’s finest and, despite having the usual Horner plagiarisms and self referencing, not to mention stealing from Prokofiev (well if you’re going to steal, steal from some of the best), it’s a powerful score in its own right and Horner built on this in his score for the next movie in the franchise.

And that’s all I’ve got to say about this one other than I am still angry that the Star Trek II fotonovel was published in black and white. Seriously? Why? However, it’s a truly great film and, although it’s not my personal favourite, it’s pretty high on my list and, for many fans of the series, this is their best one. Of course, we still had to find out if Spock was really dead. When the box office results were in, logic dictated that, you know, reports of his death may have been greatly exaggerated.