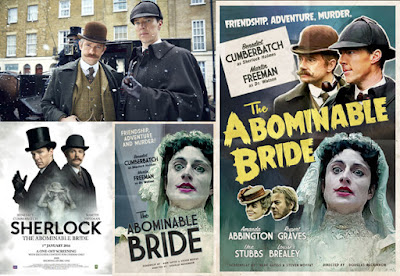 Warning: If you hadn’t already figured out certain things from the way this episode was marketed then there are some big spoilers right from the start of this review.

Okay... so this special episode of Sherlock, The Abominable Bride, is both a roaring success and a huge disappointment at the same time but I’m definitely happy to be able to say that because, truth be told, I thought it was just going to be a bit rubbish. So I’m glad that it turns out to be a well put together episode, despite it’s slight pretensions to supposedly setting Sherlock back where the series has never gone before... in the original times and places pertinent to the original character. Disappointed, however, because there weren’t any real surprises in this one and any suspicions you may have had about knowing exactly where it was going all pretty much come to pass by the end of the episode... and also into the next series, I suspect.

Being as I’m an avid Doctor Who watcher, I’ve learned to distrust Steven Moffat’s pre-publicity - often delivered via false words from the mouths of his actors when interviewed - intensely. The number of times I’ve heard something was going to happen on the show and then it’s been overturned and denied before, as it happens, it actually coming to pass just like it was planned to after all is... well, lets just say there’s no way I take anything coming out of one of his productions with anything other than several grains of salt.

Therefore, when the news hit that the new special episode of Sherlock would be set in the past, I failed to believe that was the whole story and, although the various photos coming from the set did seem to suggest that the episode would be taking place in Victorian London, I couldn’t really see that as being the end game of this one and I was pretty sure it was all going to be tied up with the actual running series, possibly even addressing the last season’s cliff hanger ending at some point in the narrative. So I kinda believed for a long time that the show would ‘actually’ be set in the present day, following on from the last episode, and I just hoped they didn’t do the reveal as... “Oh, this episode was all a dream.” Then, thinking about how they could possibly do it I figured out that probably the most plausible version would be to have the majority of the episode taking place in Holmes’ head... in his ‘mind palace’... but I similarly hoped that this wouldn’t be the case because, frankly, that pretty much amounts to the same thing as the ‘dream’ scenario in terms of cop out thinking.

Alas, right from the opening of the episode, before it even started, we are treated to a recap of the previous three series and from that point on I was pretty sure we were going to be tying up to the previous episode in some way. About 15 or 20 minutes in when Holmes starts talking about how ‘The Bride’ of the story could possibly survive a bullet to the brain was when it was completely confirmed... I was pretty sure the character was talking about Moriarty’s exit at the end of Series Two and it didn’t take too long before the bleed throughs from the ‘real world’ of the present day started playing out to that scenario. Which is  kind of a shame but I really can’t blame the episode’s writers, Steven Moffat and Mark Gatiss for taking that route. When the ‘original’ version of Mycroft Holmes, played as convincingly as ever (and more so) by Gatiss himself mentioned the term ‘virus in the data’, which the writers tried to cleverly conceal in a list of other euphemisms which were actually ‘of their time’, then it was all but spelled out for anyone noticing it. Unfortunately, I also believe that it also spells out where the next series is going to be going too, once it’s written and aired.

So, okay... that was the really bad stuff about the episode but, you know what, there’s some pretty great stuff too and the whole thing was nothing if not entertaining. The way Holmes’ mind plays with the past in a way which makes use of the critical deconstruction of the original Conan Doyle stories as published by The Strand magazine is really rather brilliant and I just loved Una Stubbs portrayal of Mrs. Hudson as she punishes her famous residents for Watson not giving her character any lines in the stories and, also, loved the suffragette angle to the episode... which seems to have been misconstrued as a bad thing from what I saw of Twitter last night but I can’t think why. Perhaps I didn’t understand that stuff properly... there was me thinking it was a positive support for feminism but... apparently no?

Actually, from what I saw of Twitter last night, this has been the one and only single handedly derided and badly received episode of the show to date and I really can’t think why that would be. Especially since, as I said at the start of this review, there really were no surprises in this one. Or maybe it’s the lack of the unexpected that people are complaining about?

Anyway, all I can add is my own support to the episode by saying that the performances of all in this were glorious and the general clever visual and audio syntax which has become synonymous with the style of the series is still very much in place. I was worried, actually, that this wouldn’t be the case because a shift back to the past is often mistaken by writers and directors as something which needs to be told in the language and style of that point in history but, luckily, the team behind the show once more got to have their cake and eat it by explaining away the dynamism of the storytelling by not, actually, setting it in the past. So it’s not intrusive unless, I guess, you really didn’t know what was going on but I suspect most of the viewers weren’t particularly surprised by this one, once they’d seen the necessity of having a recap at the start so... there you go.

Frankly, the main problem I have with this is, as Holmes concludes at the end of the episode, there’s no way Moriarty escaped death by his own hand. That means, therefore, the Moriarty which has saved Holmes from exile is, in fact, an electronic simulacrum or, as Mycroft so aptly names, a virus in the data. So the only real question as to the reappearance of the arch criminal of the series is... is this a 'legacy' virus or is it being controlled by a human being? If the latter, is it a new super villain or, is it indeed Mycroft resurrecting the appearance of Moriarty himself to help his little brother return credibly to the fold after the events of the last episode in Season Three? I don’t know when we’ll find that out but I’m guessing it’ll be a while because they seem rarely able to schedule the actors in a time slot together to shoot each series, it seems to me... even if a series is always only three episodes long.

But there you have it... some bad stuff but tastefully bundled into a sweet confection of an episode and with a lovely bit of scoring from the usual suspects David Arnold and Michael Price to boot. Disappointing, yes, but certainly tremendously entertaining and a heck of a lot better than I was expecting from it, I can tell you. Still looking forward to the next series when it comes... even if I do think I know pretty much all the answers in this case. Sometimes, the execution and professionalism with which the obvious is presented... can be enough.
Posted by NUTS4R2 at 15:26