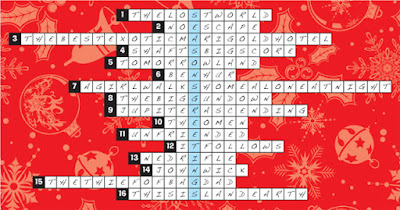 Thanks, as always, to everyone who took part in this year’s Cryptic Movie quiz. It’s much appreciated.

This year, for the first time in the four years I’ve been doing this annual quiz post, we have two winners who are winning this thing for the second time. To boot, they also managed to get all 16 answers correct. They should probably both be worried that they think like me so well.
;-)

Alex Kittle is an amazing artist and one of my all time favourite bloggers. She writes about art and movies while also doing some great, often film based, illustrations and designs. You can follow her on Twitter here and check out her blog here.

Miles Donovan is an artist/designer/blogger who does amazing things with lots of technically complicated 'stuff'. You can follow him on Twitter here and see some of his wonderful creations at his alter ego The Daily Robot here.

You should definitely check out their sites when you get a minute. A very weird and wonderful prize is winging itself to them from The Mighty Amazon as I type this.

As to the answers and how you arrive at them... please remember this is a bit of fun so some of the spelling obviously needs to be changed based on the phonetics of the situation.

3.  A sudden, nervous muscular spasm aided by a really great external skeleton, renting a room with the precious metal that it’s married.
Okay... so a nervous muscular spasm is a nervous tic. It has an external skeleton... also known as an exoskeleton. So exotic. Really great could mean the best. You rent a room at a hotel. A precious metal is gold. If you marry it that would be marry gold. So... The Best Exotic Marigold Hotel.

4. Massive soundtrack to accompany the lift (US: elevator) on its journey.
A lift or elevator travels up and down a shaft. A massive soundtrack could be a big score. So... Shaft’s Big Score.

6.  Bending her to your will... but not quite.
So not quite a case of Bend Her but Ben Hur.

8.  Put your BFG on the floor.
Back in the day, BFG in computer gaming terms meant Big F***ing Gun. Put it on the floor and you put it down. So... The Big Gundown.

13. Go back in your den with a firearm.
A firearm could be a rifle. The word den backwards is ned so... Ned Rifle.

15. The father of the satchel was stolen by this character.
Old style spelling as the first few versions of this movie here. A satchel is a type of bag. The father of a bag could be a bag dad. If it’s stolen it's taken by a thief so... The Thief Of Bagdad.

16. The dirt from this Apple Macified piece of Real Estate.
A piece of dirt could be earth. Real Estate is a piece of land usually. Apple Macified? Well there’s iMac, iPod, iPad so... iLand. So the answer is 1950s sci fi movie This Island Earth.
Posted by NUTS4R2 at 19:04