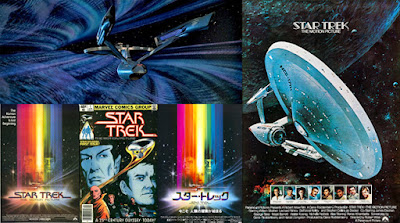 So... I got a boxed set of Blu Rays of the first ten Star Trek movies for Christmas 2015 so you can bet I’ll be slowly posting reviews as I watch through them for the next couple of months. I saw all of these movies at the cinema on their initial releases and again on VHS tapes over the years but never got around to getting them again in the DVD age... so it’s been almost two decades since I last watched this one. I remember it being a big deal at the time though.

The original Star Trek TV show was one of the few of its kind where at least some small amount of fan merchandise was available for people to buy in the years before the first Star Wars movie made the secondary spin offs as important as the actual movies. I remember owning the original TV show blue prints pack and the original photonovels... not to mention the old Mego action figures... before then picking up stuff based on this movie such as another photonovel, Weetabix cards, Topps Bubble Gum cards, the Star Trek The Motion Picture blueprint pack and so on. I still have most of this stuff, by the way, although the Mego action figures were a casualty of my past and my Dinky Starship Enterprise exploded when it was thrown at a family member in a fit of rage when I was a young ‘un (not by me, I might add).

Born from the ashes of the original TV show and the aborted Star Trek Phase 2 TV show (reviewed by Tim Pelan at Cinetropolis here), the movie was really only made possible when it was seen as something that could bandwagon off of the popularity of the space opera genre that Star Wars had created two years earlier... although it absolutely wasn't trying to be a close copy of that movie like so many were. I remember first seeing it advertised on an episode of either Tizwas or Multicoloured Swap Shop and I was so struck by the snippets of Jerry Goldsmith’s score in the clips they showed that I even entered a competition for the soundtrack recording on vinyl for one of those shows (I didn’t win so I eventually had to track down a copy for myself a few years later from soundtrack specialist shop, Dean Street Records... but it’s an amazing score and it was well worth it).

The film itself is... well it’s kinda slow. I remember it being a criticism at the time that the long special effects sequences which are dotted throughout the movie drag on interminably and, even then, I guess I kinda agreed with that diagnosis... although to be honest, the scoring in those sequences is so sublime, it really didn’t bother me the way it obviously did some people. Looking back on it now... yeah, it really drags with these long sequences of 5 or 6 minutes of, basically, looking at how good the effects photography is. It’s a bit like the director thought he was making 2001: A Space Odyssey but the gravitas that made viewing the effects work compelling in that one is not present in Star Trek The Motion Picture. Still, it really doesn’t bother me to this day because... well, like I said, the music is so good in this one and I’d be foolish to deny that I’m watching it now with a certain sense of nostalgia. It probably really doesn’t hold up these days for a lot of people but I’m still good with it. I can only imagine what younger generations who are used to seeing special effects handled less reverently than they are here must think of this movie. It probably bores a lot of people silly these days, I suspect.

The story was, and still is, the key to this one, though. Partially based on/inspired by the 1967 Star Trek episode The Changeling... well, I wont spoil the final revelations of the movie here for you but I will say that the threat to mankind in this one is partially of it’s own making, to an extent... although plain random luck completes the rest of that equation. It’s really not an action movie either and I suspect this disappointed a lot of people who went to see it when it came out... although some of the sequels certainly took care of that element, for sure.

The other main strengths of this movie, asides from the story and music, comes from the cast. All of the original regulars from TV were back including William Shatner (in a highly improbable wig), Leonard Nimoy, Nichelle Nichols, DeForest Kelley, James Doohan, George Takei, Walter Koenig, Grace Lee Whitney, Majel Barret and even Mark Lenard in a sort of cameo as a Klingon Commander (as opposed to his more familiar Star Trek role as Spock’s father Sarek). The film also stars Stephen Collins and Persis Khambatta in new roles and, luckily, their chemistry and the well written dialogue for all the old crew members certainly does a lot to make up for the movie’s rather obvious shortcomings in the pacing department. Something which Goldsmith’s monumental score also does a lot to hide.

Director Robert Wise uses a lot of classic triangular/pyramid style set ups in terms of the height of the actors and their placement in the foreground and background... everything seems to tend to gravitate to the middle of the shot and it pulls your eyes right to the centre of the widescreen frame a lot of the time... but the way the camera moves through these compositions is not very dynamic, it has to be said. There seems... at least this is the way I generally perceived it... to be a lot of static set ups which the camera moves into or out of, rather than centering around moving content and following that for a lot of the time. Not true for all the film, to be sure, but it certainly seems to be the way a lot of it is put together. It certainly is a slow one and I’d have to say that, although I’m personally fine with the movie and will always have some time for it, I have to agree with the detractors on the general sluggishness of the finished result. I find it fascinating that the director of what I consider to be the scariest horror movie ever made, the original 1963 version of The Haunting, not to mention well loved classics such as West Side Story, The Sound Of Music and the original The Day The Earth Stood Still, did a fairly bland job, in some ways, with this assignment. After all, this was the guy who edited Citizen Kane for Orson Welles.

What people these days fail to take into account, though, is the general zeitgeist of the era when the very first Star Wars film had just came out. This was one of the better “riding on George Lucas’ coat-tails” movies out there at the time and the financial rewards bore this out. It was successful enough to make a big amount of money and, as a result, they still haven’t stopped making sequel movies and TV shows to this one, still, to this day. So dull or not, in places, it did the numbers and ensured a future for the franchise, forging a steady income stream for the regular actors (who I guess got along just fine with money from various convention appearances over the years).

This is not the greatest Star Trek movie by a long chalk but... it did revive the franchise from the cancelled original TV show over a decade after it had been killed off. It could have remained a much loved but ultimately forgotten footnote if it hadn’t been for this movie rescuing it from TV Hell... so, you know, it deserves some of your time and respect, I think, if you are a fan of Star Trek. It lives long and prospers in the hearts of many, still, I suspect.