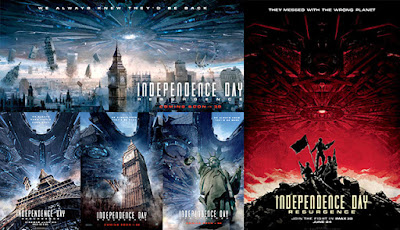 Warning: Technically a slight spoiler for
the original movie, if you’ve never seen it.

Hmmm... okay. I guess we all remember the trailer campaign for the original Independence Day in 1996, right? Those of us who are old enough to remember... which it turns out wasn’t the case with the girl selling me my ticket to this screening, when I asked her about how this one was.

It was kind of a ‘wearing you down’ campaign for a hugely budgeted movie about Americans saving the planet from alien invaders by hacking into their alien technology with an Apple computer. This was in the days when Apple were truly great, of course, and not the huge, greedy, corporate money trap they’ve become in just the last few years. We all kinda half trusted Roland Emmerich in those days because he’d caught the current zeitgeist... or more like recreated it... when he brought out a movie before this called Stargate. So when we all sat down to watch the original Independence Day in cinemas, in spite of the gruelling trailer campaign, most of us kinda liked it. Which was okay and lasted about as long as until we got the home video version when, I suspect, a good deal of us realised that we would never want to watch this rubbish ever again.

So here we have a sequel that nobody wanted... or at least I didn’t... taking place 20 years after the original movie in both reality and fictional terms and calling itself Independence Day - Resurgence. I didn’t really want to see this one at all, to be honest, but I’d rather see it on my Cineworld Unlimited card for free (more or less) to find out if it’s any good rather than risk buying a cheap blu ray in a sale at a later point. So I went down to my local on its first Saturday morning and was astonished to find, just like the screening of Gods Of Egypt the week before (reviewed here), that there were only five people, including myself, in the screening for the 3D showing. So, yeah... wondering what that will mean for the box office.

Now, as it turns out, I quite enjoyed this sequel and found it to be a lot more engaging than the first movie. What surprised me, though, is that it felt like a different kind of film. Although the budget for this was somewhere around 165 million dollars... which is just silly... I would be lying if I were to say the money was easy to see on the screen and, despite an abundance of relatively impressive special effects shots, it actually felt more like a small, chamber piece of a sequel, rather than a full blown affair. The original movie back in 1996 maybe suffered from feeling too much like it was trying to be an epic movie. This time around, it doesn’t feel like it’s trying to be too splashy and, surprisingly, that really helps it, I think.

Anyone hoping to see Will Smith reprise his character will have to make do with the substitute of that character’s son, played by Jessie T. Usher. He doesn’t get a heck of a lot of screen time to be honest but it’s okay because, like the first film, he’s joined by some great actors, a fair few who were veterans of the first movie. So we have newcomers Liam Hemsworth, Maika Monroe, Angelababy and the always watchable William Fichtner, mixing it up with the likes of the charismatic Jeff Goldblum, Judd Hirsch, the brilliant Bill Pullman and, playing a slightly less irritating version of the character he played in the first movie... Brent Spiner. And the icing on the cake is the amazingly brilliant actress Charlotte Gainsbourg playing the love interest/female professor element to the film, Catherine Marceaux .

Okay, so a bunch of cool cast members does not a cool movie make but, like I said, we’re in luck because this feels a little different to the kind of movie the first one was. I mentioned above that it’s not just been made twenty years later... it’s set twenty years after the first film too. What that means in terms of the world that survived the alien invasion in that first one is that man has evolved into a species where every nation is at peace and where the technology has advanced to a level far removed by where we are in the real world. This is pure science fiction in that we have a weapons defence system around the Earth, a moonbase and... yeah, it’s definitely a highly futuristic version of 2016 presented here. So it feels less like it’s trying to be a disaster movie and maybe that’s why, in general, this sequel is a lot more pacier and entertaining than the first outing. It doesn’t hurt that it doesn’t have the humongous running time of the first one either. It’s a straight two hours but, this time around, it doesn’t get dull and it flies by real fast, I have to say.

The film is quite clichéd, as you would expect it to be, but that doesn’t rip the teeth out of those old tried and tested movie conventions and helps build drama in a way that you can tell the director is an old hand at manipulating people’s emotion through moving image... which is no bad thing when you are directing a sequel that nobody really wants, I guess. For instance, the writers spend a good deal of time setting up just how powerful the Earth’s defence against any returning invasion forces are and, when they start doing this, you just know they’re setting you up so that they can quickly rip them out from under you and bring you back to the equivalent of bows and arrows against the Gods and... yeah, that pretty much happens and exactly when you’d expect it to, to be honest. But, in a way, you kind of know that has to happen in order to move the story on so it’s not so much of a disappointment and, like I said... it’s an entertaining movie.

The writers also, however, add another factor to this movie which I don’t want to spoil too much but... lets just say, there’s a lot of scope for a future sequel and if that happens, it’s probably not going to be going in a direction that someone who hasn’t seen this particular movie would expect it to go in. I don’t want to spoil the surprises here but, suffice it to say, man shouldn’t always be arrogant enough to think he’s the most important species in the Universe and that’s kinda highlighted here, no doubt about that.

Now, I would have loved it if David Arnold could have returned to score this sequel to one of his big movie hits but, alas, this time the scoring duties go to Harald Kloser and Thomas Wanker (the latter being credited as Thomas Wander on this one, for some reason). Now, it’s really not a bad bit of scoring and I am going to see what it plays like on its own (assuming a proper, physical CD gets released) but I did feel it sounded a little inappropriate and over-the-top in its thematic exuberance at certain points. However, this probably just means I’ll enjoy it a hell of a lot more as a stand alone album so... yeah, that’ll happen for me at some point, I think. It mostly seems to work though so... would’ve been nice to reunite Arnold with the franchise but this isn’t too bad either.

And that’s me done for this movie. I kinda liked this one and I really wasn’t expecting to. The script isn’t terrible, the line delivery is good and it doesn’t quite throw the USA patriotic thing down your throat constantly like the original movie seemed to do... which is always a good thing.  If you liked the first Independence Day movie, then you probably won’t have too much of a problem with this one. If you didn’t think the first one was all that great then.. you might be pleasantly surprised because Independence Day: Resurgence is a much smaller affair compared to the large sprawl of the first film. There’s a good chance you won’t be bored here at all, in fact. I was quite glad I gave it a go, even though the trailer looked terrible, so... yeah, maybe give this one a chance.
Posted by NUTS4R2 at 19:40