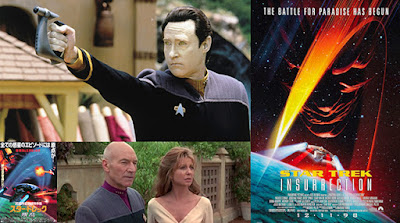 It’s a shame that this film wasn’t better received when it came out. Frankly, Star Trek - Insurrection seems, to me, to be a much maligned film and, though it’s not up to the calibre of the previous Star Trek movie, also directed by Frakes, it deserves a better reputation than it’s got. It’s actually the second best of the four movies in the series utilising the crew members from the TV show Star Trek - The Next Generation and, to be honest, Star Trek - First Contact (reviewed by me here), was always going to be a hard film to follow.

I think one of the problems is that the emphasis of the film is less on action and more about moral dilemmas, with the film revolving around the Federation, who are traditionally seen as the good guys, taking a morally wrong stance, as they try to covertly relocate the population of a planet, the Ba’ku, to be able to harvest the particles in the planets atmosphere and use them to prolong the life of various people. So, yeah, it the old, ‘fountain of youth’ plot but with the added frustration of the establishment which ‘the good guys’ are supposed to be representing being, in themselves, a part of the problem and not a solution to it.

Now, I’m not going to defend this movie to the hilt here... there are some things wrong with it, to be sure, and I think some of the earlier script and story ideas, such as Picard being courtmartialed for his actions throughout the movie, may have been a lot more satisfying, dramatically, than the final version of the movie we are left with. However, I don’t think it’s fair to compare Insurrection to the dazzling brilliance of First Contact, which admittedly raised everyones expectations for this one, and there are some really nice scenes in here.

One of the things it does really well is play up the romantic aspect of the characters. Jonathan Frakes and Marina Sirtis reprise their on screen roles as Commander Riker and Deanna Troi but, this time, they are allowed to rekindle the long lost romance which was already in their past before the timeline of the first ever episode of Star Trek - The Next Generation. This back story was briefly touched upon in the series but in this movie we see the two characters reunited romantically, and this includes seeing Troi in a bathtub as she shaves off Riker’s beard... making this the first time the character has been beardless since the first season of the show. Frankly, I think there should be more movies where Marina Sirtis is seen in a bathtub but, hey, that’s another story. Both Frakes and Sirtis play the scenes with a certain amount of charm and teasing enthusiasm that really makes their screen time whiz along nicely.

Similarly, Picard also starts up a romance, of sorts, with one of the planet dwellers, Anij, played so wonderfully well by actress Donna Murphy... always a pleasure to watch her on screen. Picard also has some good, comic moments in this and the movie itself starts off very strongly with a rebelling Commander Data taking on all his superiors in the quadrant, in an effort to protect the inhabitants of the planet. The disappointing part of that is the punchline that he has been damaged when shot at and so everything is wiped out in his android brain other than the difference to tell right from wrong. I would have much preferred him to have made this decision to fight the Federation on his own terms but I guess the end result amounts to the same thing... more or less.

This film also sees the restoration, due to the planet’s atmosphere, of Geordi La Forge’s eyesight, without any kind of electronic aid and, as he watches a sunset with his Captain for the first time, it’s another scene in a movie full of such scenes where the emphasis seems to be about how great it would be if everyone just learned to slow down and look at what’s going on around them. Which is great and something I can really get into... although bringing this aspect into the structural make-up of the movie does seem to kill the pacing, somewhat, I would say. But isn’t that kind of the point?

It’s actually quite a nice looking film and that goes for some of the special effects, too. There’s a sequence near the end of the movie where Riker in the Enterprise is playing a deadly game of hide and seek with the new ‘allies’ of the Federation (who want the planet for themselves, for reasons I won’t spoil here), in a sector of space known as ‘the briar patch’. It’s actually an echo of a similar set of scenes, to my mind, between Kirk and Khan in Star Trek II - The Wrath Of Khan (reviewed here) but these are some of the most beautiful and colourful shots of the Enterprise in this section of the film than any we’ve seen before or since. Some really great stuff.

There’s a downside to this too in that, unlike the original Star Trek series from the 1960s and the subsequent film versions, the Star Trek - The Next Generation episodes were always much more about being ensemble pieces which would explore aspect of all the characters, with everyone getting great chunks of screen time, sometimes a whole episode, to shine and explore their roles. In the movie versions, although the majority of the characters do have some nice scenes, the movies are much more focussed on Patrick Stewart as Captain Picard and Brent Spiner as Data... which is fine and, in some ways, tends to make the movies more focused, but ultimately does mean that everyone else gets considerably less time in the spotlight. Which is a bit of a shame, to be honest.

Once again, Jerry Goldsmith returns to provide another, very beautiful score although, like the movie itself, I think it’s also been underrated, somewhat, by people who listen to such things. After the standard Alexander Courage intro, rather than go into another version of his sweeping main title theme from Star Trek - The Motion Picture (reviewed here), which by this time was completely synonymous with the crew of The Next Generation, he does something completely different but appropriate to the opening title sequence of the peaceful Ba’ku and the observation of their culture. It’s a lovely them which I suspect is overlooked by some fans of Goldsmith’s work because it’s not particularly action oriented. However, there is also some good and very typical Goldsmith action moments during the film and, as a nice crowd pleaser, he also requotes the Klingon theme he used for the first film... and again in Star Trek V - The Final Frontier (reviewed here) and Star Trek - First Contact, this being the second time it’s been used as a heroic theme to underline Worf’s character at a certain moment.

All said and done, however, it’s certainly not among the greatest of the Star Trek movies, to be sure, but equally, it is one of the two greatest Star Trek - The Next Generation movies. I think regular fans of the show may find themselves having a much better time of it with this movie, now that some years have passed, than they did when it was first released into cinemas. Certainly, I suspect, it will be much better remembered than the last of the Next Generation movies, which was soon to follow... but I’ll get around to watching Star Trek - Nemesis sometime soon and hopefully get a little more out of it than the terrible experience I had at the cinema with that one. We shall see.