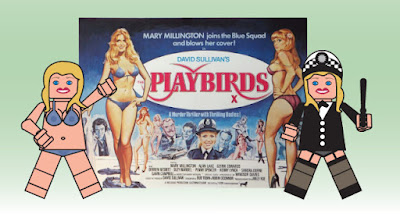 Warning: Yeah, this is going to have spoilers for those
of you who care about such things in these kinds of films.

Okay. So you may remember I reviewed the Mary Millington sex comedy Come Play With Me on here a little while ago (click here for my review). I remember being rather surprised by the lack of actual soft core pornography in it and amazed about the general tone of it which is, pretty much, the same as a Carry On movie. So... populated by loads of British character actors of the time but with sex and nudity inserted into the story. If you can call it a story.

Well, I thought that experience would have at least prepared me a little bit for watching Mary’s second big breakthrough movie, The Playbirds, which takes its name from The Playbirds magazines which were one of the cornerstones of producer David Sullivan’s porn empire, and which featured Mary as the regular figurehead/mascot. However, although the movie does have some sex and nudity scattered at intervals throughout the picture, this one is a complete sea change from the previous picture and it’s a much more sombre affair. In fact, given the small part that nudity and sex play in the finished product and it’s preoccupation with a police procedural plot as a serial killer murders centre spread girls from the magazine, I’m going to go right ahead and call it right here...

The Playbirds is, pretty much, the British equivalent of a giallo movie.

It really isn’t about sex... although that is the currency which it uses to forward the story. Instead, it follows a police investigation which becomes a giallo style whodunnit in exactly the same way that the Italian movies would fix it so it’s almost impossible to guess the identity of the killer... implausible jumps in logic included. Like The Playbirds, though, it stars a wealth of British characters who you wouldn’t expect to see playing in a movie of this... um... calibre.

The film follows the exploits of Chief Superintendent Holborne and his partner, Inspector Harry Morgan. Holborne is played by Glynn Edwards and, if that name is not familiar with you, he played the pub landlord on the TV show Minder for many years, as well as starring as one of the title roles in Burke and Hare (reviewed here) along with Derren Nesbitt (who also has a small role in this movie as one of the pornographers responsible for printing the titular magazine). And if you think that piece of casting is extraordinary, his partner Morgan in this is played by none other than Gavin Campbell and, for anyone who used to watch the TV show That’s Life with Esther Rantzen... oh yeah, that Gavin!

The two go around trying to patiently solve the murder of various girls who have all been strangled (mostly with no clothes on... it’s a Mary Millington movie, after all) by a man in a Sherlock Holmes style Deerstalker... and then numbered with lipstick on their foreheads by someone who presumably doesn’t like their involvement with The Playbirds magazine. The magazine, of course, is highlighted constantly in the movie and I’m sure Mary Millington can be seen in some posters in the background of the printworks in some shots, even though the character she is playing is not in any way associated with the magazine until the end of the movie. I’m not sure how early metatextual references like this started appearing in what are considered, technically, British softcore movies but I’m guessing this was one of the first.

So who is Mary actually playing in this movie? Well, the film starts off with a model in a naked photo shoot and then, after a brief scene highlighting a racehorse which Holborne keeps betting against and which serves absolutely no purpose as a subplot of any relevance at all, although its referred to all the way through the movie, we first meet Mary walking the beat on the streets of London as Sgt. Lucy Sheridan. Yep, she’s a copper although, given her attitude and opinion of her majesty’s constabulary in real life, it seems a bit of an ironic role for her to have taken on. She’s also accompanied by a truly terrible theme song which is a shame since the movie was scored by David Whittaker, who worked on a couple of Hammer films and who also provided a pretty good score for The Sword And The Sorcerer. Mary keeps cropping up throughout the movie and even has an attempt at a foot chase at one point in the film but, for the first three quarters of the movie, she has more of a peripheral role until her unique talents are required to further the plot, such as it is, by the end of the movie.

And what we have is a movie set on the streets of 1970s London (which is always lovely to see, as I best remember it, back in the day) with character actors like the aforementioned cropping up. Also on the police force are Kenny Lynch (remember him?) and Holborne’s boss is played by none other than Windsor Davies (who you may remember as the Sergeant in the TV show It Ain’t Half Hot Mum). We also have Dudley Sutton in here, looking exactly the same age as he has for decades, playing some kind of bizarre and religious fanatic.

In between the police procedural scenes we have various Playbirds photo shoots going on as, presumably, an essential part of the plot. For instance, an occult theme is brought into the spreads and a shoot based, quite loosely I suspect, on shenanigans at The Hellfire Club is shown as one big orgy including a lady having sex with the underside of a rocking horse... surprised the BBFC let that through, actually. There’s also a witch being burned at the cross naked in a photo shoot scene too, which goes horribly wrong when the killer somehow manages to turn it into a real burning... although the way the special effects, such as they are, have been shot here may well mean you take a while to realise that this is actually what’s happened, it has to be said.

And we also have another nice tie in to the Italian giallo movies of the late 1960s and early 1970s in that one of the victims is found, by Gavin, in a room lit with both red and green lights. The effect of this, of course, is like a poor man’s Mario Bava has been on set so, yeah, I’m still sticking with this giallo parallel because it makes me wonder what kind of movies the director and cinematographer had been watching at the time. It does kind of compliment that style of shooting very well, especially in this scene.

And then we have Mary herself. The police get the idea to plant a girl working for Playbirds who will start at the massage parlours and then work her way into being the cover girl of the month so she can be bait for the killer. What this means for the audience, of course, is that we have Holborne and Morgan ‘interviewing’ hitherto unseen lady members of the police force by having them do a sexy strip routine so they can give the job to the most likeliest person to succeed. It’s almost like the film suddenly stops for a while so the director can showcase various ladies stripping for the audience... well... um... yeah. And, of course, Mary’s character wins hands down and it’s not long before she’s the magazine owners girlfriend... which I understand she more or less was in real life for a while, despite being married to someone else.

The really hilarious thing about this movie, bearing in mind the age of the film, is the police relying constantly on getting their leads by punching in information to be analysed in the ‘computer room’. And, yes, it’s a room full of cheap computers where nobody really looks like they know what they’re doing and with a printer which gives our heroes leads when the correct information is, somehow, or other, fed in. Let me tell you, though, those computers back in those days must have been absolutely miraculous. The police learn the identity of the killer thusly: They see a head looking out of a window on a photo and they get the computer to enhance and blow this up (not that you see any of this, of course). Once the shape is blown up they get the computer to take ‘x-rays’ of the face on the photo so they will reveal the bone structure of the person and then they compare it to the bone structures of x-rays of suspects in their computer records. What the f***? Quick, someone alert Microsoft and Apple now that someone has managed to figure out a way to take ‘x rays’ of a person from a still photograph. They need to get that patented fast.

The ending of the movie is almost as equally astonishing and certainly way more downbeat than you would expect from this kind of sub-genre. The killer is unmasked by the police and taken into custody. In the last scene of the movie we see Mary Millington answer a phone call from her police colleagues and receive the news that he’s just been locked up. How then, can he suddenly crash into her apartment and strangle her in a really downbeat ending, leaving her naked body floating in the bath. Does he have some kind of supernatural powers that we’ve previously not been made aware of over the course of the film? Seriously, this is just the kind of twisted, deranged anti-logic that lets a lot of gialli down and, sadly, this film does exactly the same thing. I have no idea how this ending can even work within the context of everything else we’ve been told but... well, there you have it.